In June, Russia's parliament passed a draconian law that would prohibit the spreading of pro-gay “propaganda” to minors, raising concerns from human rights activists who fear the measure will be used as a tool of political repression against LGBT. The law poses a special threat to openly gay Olympians and visitors who will be traveling to Sochi for the 2014 Winter Olympics. Despite the law's domestic and international significance, which received coverage on both CNN and MSNBC, Fox News failed to mention the controversy surrounding the measure.

Russia Passed A Draconian Measure Cracking Down On Pro-Gay “Propaganda”

Russia's parliament has unanimously passed a federal law banning gay “propaganda” amid a Kremlin push to enshrine deeply conservative values that critics say has already led to a sharp increase in anti-gay violence.

The law passed 436-0 on Tuesday, with just one deputy abstaining from voting on the bill, which bans the spreading of “propaganda of non-traditional sexual relations” among minors.

The law in effect makes it illegal to equate straight and gay relationships, as well as the distribution of material on gay rights. It introduces fines for individuals and media groups found guilty of breaking the law, as well as special fines for foreigners.

International rights groups have called the current situation in Russia the worst human rights climate in the post-Soviet era. [The Guardian, 6/11/13]

Anti-Propaganda Laws Have Been Used As “Tools Of Political Repression” Against LGBT Russians. According to The Nation:

[M]any in Russia's LGBT community fear the legislation will tacitly condone discrimination and violence against sexual minorities. LGBT activists are already regularly beaten here, and two men were gruesomely murdered in separate incidents in May, allegedly for being gay.

“These social consequences are a lot more dangerous than any fines for 5,000 rubles or a ban on public events or something like that, because they are connected with people's individual fates,” said the well-known lawyer and gay-rights activist Nikolai Alekseyev.

Alekseyev said that regional gay propaganda laws have been used as tools of political repression, not as safeguards against corrupting children. The activist was himself fined in 2012 under St. Petersburg's law against gay propaganda among minors after he stood in front of city hall holding a sign with a quote from Soviet actress Faina Ranevskaya, “Homosexuality is not perversion. Perversion is hockey on the grass and ballet on the ice.”

The federal gay propaganda law will hit LGBT activists with stiffer fines, lead to even more arrests at street rallies and possibly exacerbate the beatings they already face at the hands of counter-protesters. [The Nation, 6/28/13]

Russia is a party to the European Convention on Human Rights and the International Covenant on Civil and Political Rights, and so has undertaken legal obligations to guarantee the rights to freedom of assembly and expression and to ensure the enjoyment of those rights without discrimination. The European Court of Human Rights and the UN Human Rights Committee have both issued several decisions that make it abundantly clear to any state party that the type of legislation banning “homosexual propaganda,” which already exists in five regions of Russia and is proposed on federal level, would violate those rights and be a breach of international human rights law. [Human Rights Watch, 6/29/12] 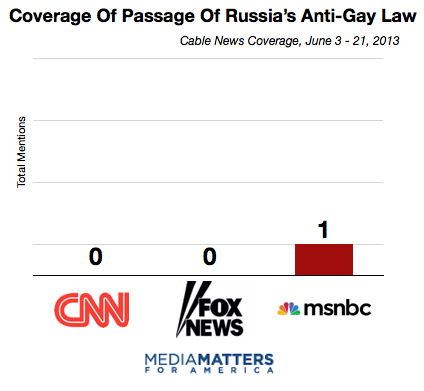 After mounting concern about how Russia's anti-gay law would affect athletes headed to next year's Winter Olympics in Sochi, the International Olympic Committee has finally released a statement saying it will “work to ensure” no discrimination against LGBT participants.

“The International Olympic Committee is clear that sport is a human right and should be available to all regardless of race, sex or sexual orientation,” the statement reads. The organization also says it will make sure “the Games can take place without discrimination against athletes, officials, spectators and the media.”

Several LGBT advocacy groups called for a boycott of the 2014 Winter Olympics following last month's passage of a Russian law that bans “propaganda of nontraditional sexual relations.” Activists have raised concerns that the law's vague language gives Russian authorities plenty of leeway in determining just what “propaganda” means, with some worried that public declarations of same-sex love could result in fines or jail times. [The Baltimore Sun, 7/18/2013]

A Russian lawmaker has said the 'gay propaganda' law will remain enforced during the Sochi Winter Olympic Games in 2014.

Vitaly Milonov, co-sponsor of the 'non-traditional relationships' bill, said the government cannot decide when to selectively enforce the law.

It comes as the International Olympic Committee said the Russian government had 'assured' them all athletes and spectators will be safe from arrest.

Speaking to Interfax and as translated by GSN, Milonov said: 'I have not heard any comments from the government of the Russian Federation but I know it is acting in accordance with Russian law.

'If a law has been approved by the federal legislature and signed by the president, then the government has no right to suspend it. It doesn't have the authority.' [Gay Star News, 7/30/13]

Russian Sports Minister: “No One Is Forbidding” Gay Athletes From Attending, But They Will Be “Held Accountable” If They Start “Propagandizing.” According to the Russian news agency RIA Novosti Sports:

Russian Sports Minister Vitaly Mutko warned Thursday that athletes and visitors to the Sochi Olympics will be subject to the country's laws against promoting homosexuality, contradicting a statement from the International Olympic Committee that the government had promised they would be exempt.

The IOC told R-Sport Friday it “has received assurances from the highest level of government in Russia that the legislation will not affect those attending or taking part in the Games,” which start February 7.

But in the first reaction from the government since the IOC made that claim, Mutko appeared to set the record straight.

“No one is forbidding an athlete with non-traditional sexual orientation from coming to Sochi, but if he goes onto the street and starts propagandizing it, then of course he will be held accountable,” Mutko told R-Sport. [RIA Novosti Sport, 8/1/13]

Russian Official: Gay Athletes Who “Engage In Propaganda ... Will Be Punished In Line With Russian Legislation.” According to Interfax:

Russia's new law banning gay propaganda must not be violated even during the Olympic Games on Sochi but representatives of the LGBT community should not be punished for their sexual orientation alone, Igor Ananskikh, deputy chairman of the State Duma's Physical Culture, Sport and Youth Policy Committee, told Interfax on Friday.

“The Olympic Games is a major international event. We need to be as polite and tolerant as possible,” he said.

“The law came into force and cannot be neutralized, however, individuals with unconventional sexual orientation can also be participants of the Olympiad. But under the law they will be unable to engage in propaganda, otherwise they will be punished in line with Russian legislation,” he said.

“Russia plans to host large international competitions in the future. The atmosphere at them must be as safe and polite as possible,” Ananskikh said.

For his part, Nikolay Alexeyev, a leader of the Russian LGBT (lesbian, gay, bisexual and transgender) community, told Interfax that several athletes have already announced their readiness to show up for the Opening Ceremony of the 2014 Olympic Games in Sochi holding flags and symbols of the LGBT community. [Interfax, 8/2/13, emphasis added]

Fox News Has Failed To Cover Controversy Over Russian Law. According to a Media Matters analysis of cable news coverage on the Russian law, Fox News has spent zero seconds reporting the controversy surrounding Russia's anti-propaganda law and the 2014 Winter Games between July 18 and August 5. CNN and MSNBC devoted more than 67 and 20 minutes to the controversy, respectively: 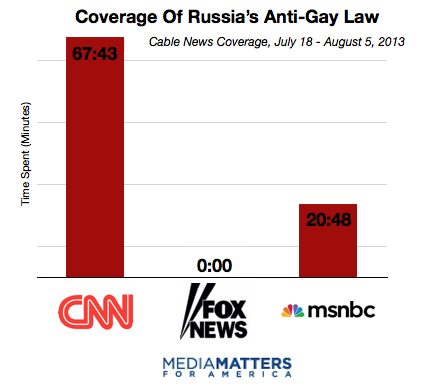 Media Matters searched news transcripts provided by TV Eyes for the words “Russia,” “gay,” “homosexuality,” and “LGBT” between June 3 and 21. The same search was conducted between July 18 - the day after the IOC claimed Olympic visitors would be exempt from the law - and August 5. Reruns and teases for upcoming segments were excluded. Passing references to the controversy during discussions of other topics were also excluded.