Fox News largely ignored a historic vote on November 4 when the U.S. Senate voted to take up the Employment Non-Discrimination Act (ENDA), a bill that bans workplace discrimination based on sexual orientation and gender identity. While CNN and MSNBC covered the vote, Fox devoted half of its already-scant coverage to dismissing ENDA as a “distraction.”

ENDA Would Ban Emoloyment Discrimination On The Basis Of Sexual Orientation And Gender Identity. According to the Huffington Post:

In A Historic Vote, The Senate Voted To Advance ENDA For A Full Debate

Senate Voted 61-30 To Advance ENDA For A Full Debate. On November 4, the Senate voted to move ENDA forward for a full debate. According to CBS News:

With the support of every member of the Democratic caucus and some Republicans, the Senate on Mondayvoted to move forward with the Employment Non-Discrimination Act (ENDA), a bill that would prohibit discrimination in the workplace on the basis of sexual orientation or gender identity.

The bill is now all but sure to pass in the Senate, where a handful of Republicans voted Monday to proceed with the bill -- including one stalwart conservative, Sen. Orrin Hatch, R-Utah. Still, its fate in the Republican-led House is unclear. A spokesman for House Speaker John Boehner, R-Ohio, said Monday that the speaker opposes the legislation. [CBS News, 11/4/13]

Cloture Vote Means Senate Will Consider ENDA For First Time Since 1996. As The Washington Blade reported, the Senate has not taken up ENDA since 1996, when the measure failed by one vote:

It's also the first time the Senate has considered ENDA since 1996, when the bill came to the floor as part of a deal to consider the Defense of Marriage Act and failed by one vote.

The cloture vote is also significant because the 60-vote threshold necessary to overcome a filibuster is higher than the simple majority needed for final passage. It means the legislation is almost certain win final approval in the Senate. [The Washington Blade, 11/4/13]

Transgender-Inclusive ENDA Has Never Passed A Chamber Of Congress Before. The current Senate version of ENDA prohibits workplace discrimination based on sexual orientation or gender identity. As the Center for American Progress notes, gender identity protections were not included in the 2007 House-passed version of ENDA:

In 2007 members of Congress introduced the first version of ENDA that included discrimination prohibitions on the basis of both sexual orientation and gender identity. Unfortunately, this inclusive version of ENDA died in committee. Rep. Barney Frank (D-MA) made a second attempt at moving the bill through, this time without the provisions protecting transgender workers from discrimination.

That year the House passed ENDA by a vote of 235 to 184. In the Senate, however, the bill was not referred to a committee or brought to the floor for a vote. ENDA likely failed to come to a vote in the Senate due to the exclusion of gender identity from Rep. Frank's bill. [Center for American Progress, 7/19/11] 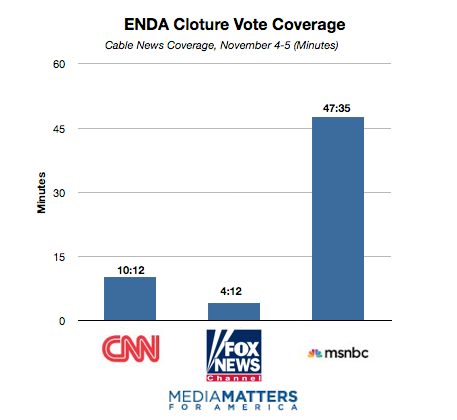