The Federal Communications Commission (FCC) today voted to repeal net neutrality rules, which will allow internet service providers to block or slow down service and access to websites, or charge fees for faster service.

If you weren’t aware of this potentially monumental change that will significantly impact your internet access, that’s because the major news networks mostly haven’t been doing their jobs.

This morning, most of the morning news programs either completely ignored the impending move or cursorily mentioned it for a few seconds at a time. Among the cable news networks, Fox News’ Fox & Friends spent just 52 seconds on net neutrality. MSNBC’s Morning Joe and CNN's New Day did not cover the story at all. (It was covered for about half a minute on MSNBC's early morning show, First Look, and roughly one minute on CNN's early morning show, Early Start. After the conclusion of Morning Joe, MSNBC has been covering net neutrality in detail on MSNBC Live.)

The broadcast networks also spent scant time on the issue: ABC’s Good Morning America devoted just 14 seconds to net neutrality and NBC’s Today didn’t mention it at all. CBS This Morning led the pack with two and a half minutes of coverage this morning, and was the only one of the flagship morning programs to run a full segment on the topic. 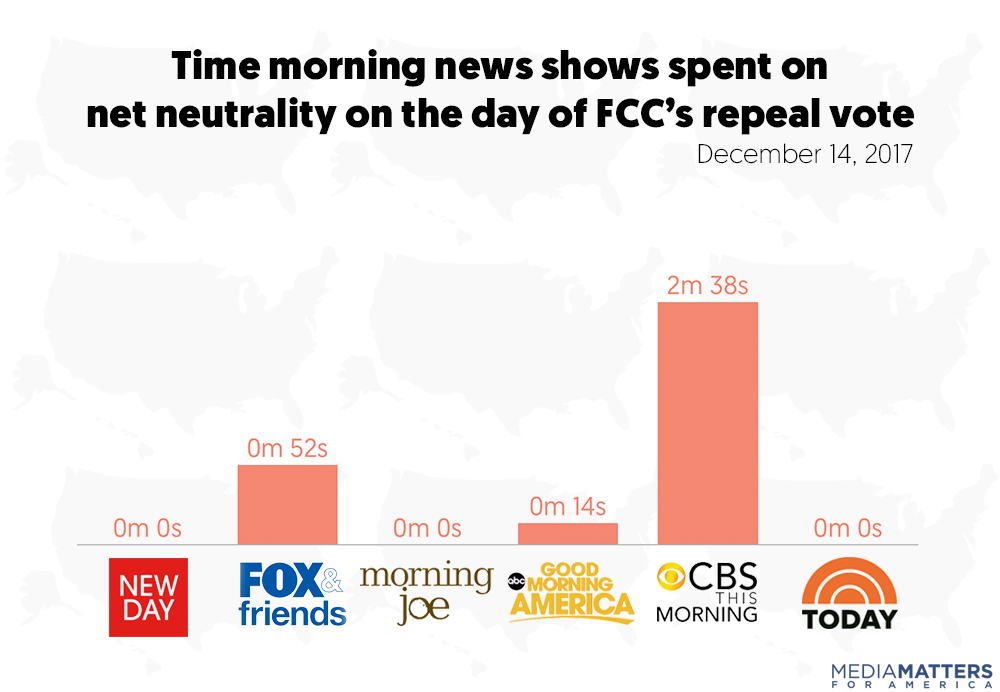 Since November 28, cable news networks have mostly given net neutrality minimal coverage: approximately five minutes each on CNN and Fox News and almost 17 minutes on MSNBC, which has consistently devoted the most coverage to net neutrality in recent weeks. Broadcast networks have been mostly crickets, too. Since November 28, NBC has devoted about eight minutes to covering net neutrality while CBS has spent close to five minutes, and ABC has devoted just 14 seconds to the topic -- the brief mention on Good Morning America this morning.

Since November 20, when news first broke about the planned repeal, the six networks have devoted a combined nearly one hour and 53 minutes to the story; although, MSNBC alone has accounted for more than one hour and three minutes of that total coverage time. The vast majority of the coverage occurred before November 28. 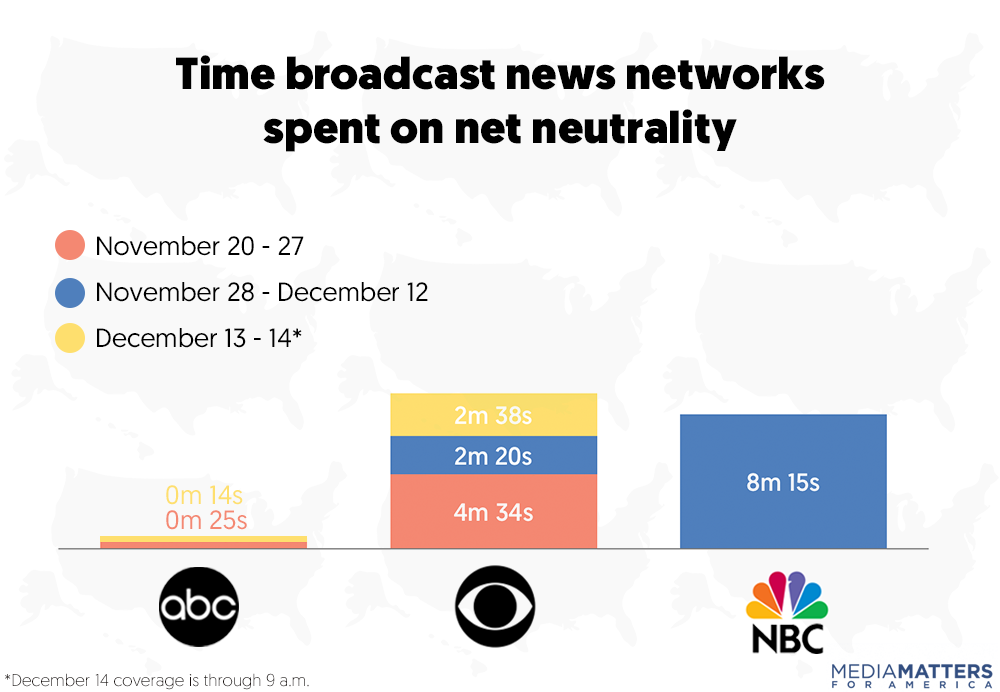 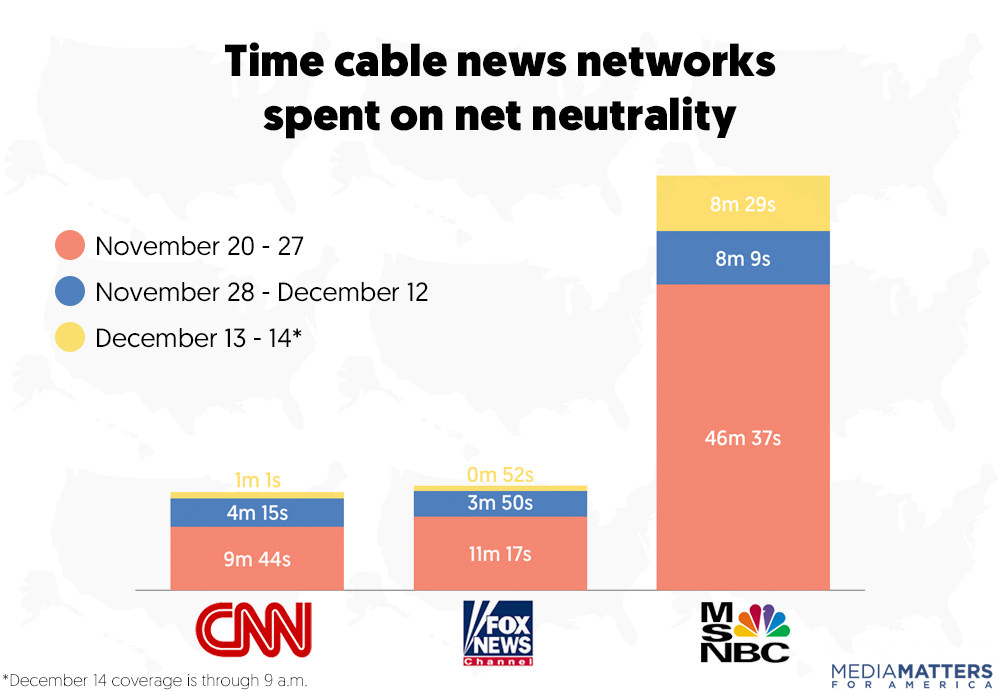 Under Trump, the Republican-led FCC has already done significant damage to the local news landscape and paved the way for major corporate consolidation in media -- but repealing net neutrality seems to be its most unpopular action yet. A new survey found that 83 percent of Americans don’t approve of the FCC’s repeal proposal -- including 3 out of 4 Republicans. Even the FCC’s own chief technology officer warned against the move. And 18 attorneys general had called for a delay in the vote due to widespread fraudulent comments during the public comment period.

That’s probably why chairman Ajit Pai’s media tour in the days before the net neutrality repeal has largely targeted conservative and far-right media that may provide a (marginally) more friendly audience. Since November 21, Pai has given four cable news interviews: two with Fox & Friends, one with Fox News’ Tucker Carlson, and a fourth with conservative talk radio host Hugh Hewitt at MSNBC. He did not give an interview to any of the three major broadcast networks. (Pai also seemingly promoted the repeal by appearing in an embarrassing video at The Daily Caller along with renowned plagiarist Benny Johnson and a Pizzagate conspiracy theorist.)

It’s also why major news networks’ relative silence on such a deeply unpopular and hugely consequential action like the FCC’s repeal vote is a net benefit to the commission and to major corporations -- and keeps an informed public from fighting back.

Media Matters searched the Snapstream database of television video transcripts for any mentions of “net neutrality,” "Federal Communications Commission,” or “FCC” from November 20 through December 14, 2017 on ABC’s Good Morning America, World News Tonight with David Muir, and This Week with George Stephanopoulos; CBS’s This Morning, Evening News, and Face the Nation with John Dickerson; NBC’s Today, Nightly News with Lester Holt, and Meet the Press with Chuck Todd; and all-day programming (through 9am on December 14) on the three major cable news networks -- CNN, Fox News Channel, and MSNBC. We also searched the Nexis transcript database and the iQ Media transcript database for the same terms. Since November 23 was Thanksgiving, some networks altered their regularly scheduled programming on that day.

Note: This post has been updated to reflect that the FCC officially moved to repeal net neutrality rules in a 3-2 vote on December 14.