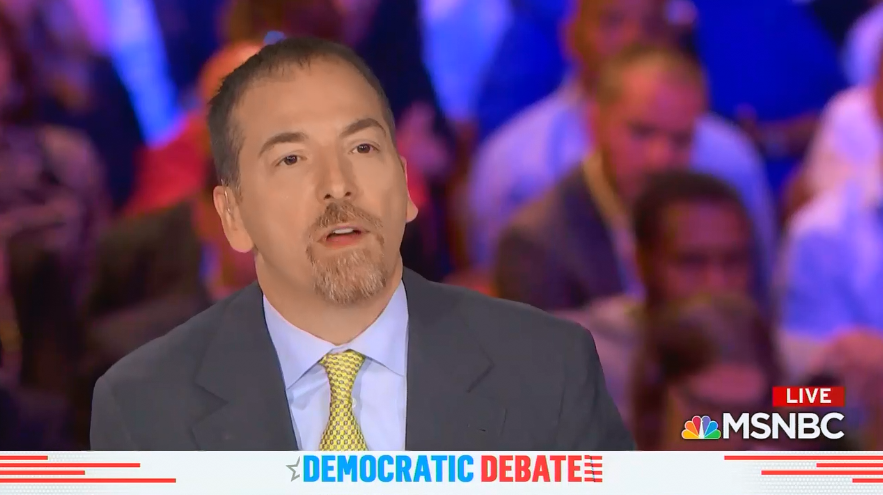 NBC host Chuck Todd served as an example of how not to ask presidential candidates about their gun safety platforms during the first Democratic primary debate with sensationalized questions that raised the prospect of gun confiscation. Todd’s framing recalled false right-wing talking points that strengthening gun laws would necessitate the government taking people’s privately owned firearms.

Todd served as a moderator, along with MSNBC’s Rachel Maddow, for the second half of the two-hour debate, which featured 10 of the 20 Democrats running for president who qualified based on small-donation fundraising and polling numbers.

Firearms came up multiple times, including when Todd raised the prospect of gun confiscation with former Texas Rep. Beto O’Rourke, asking how he’d talk to voters who are afraid he’s going to “take my gun away”:

CHUCK TODD (DEBATE MODERATOR): Congressman O’Rourke, you’re a Texan who’s campaigned -- you campaigned all over the state in 2018, in the most conservative parts there. What do you tell a gun owner whose may agree with you on everything else, OK, but says you know what, the Democrats, if I vote for them in there, they’re going to take my gun away. And even though I agree with you on all these other issues. How do you have that conversation?

Todd’s line of questioning was ripped straight from the National Rifle Association’s playbook. For years, the pro-gun rights organization has been fearmongering that any type of gun safety legislation -- from universal background checks to assault weapons bans and CDC research on gun violence -- is a “slippery slope” that could lead to a national gun registry and ultimately an all-out confiscation of every firearm.

Todd also raised the issue with Massachusetts Sen. Elizabeth Warren, asking her if the federal government should play a role in enforcing any firearm legislation passed, including an assault weapons ban. When she didn’t explicitly address confiscation, he clarified his point:

CHUCK TODD (DEBATE MODERATOR): You didn’t address -- do you think the federal government needs to go and figure out a way to get the guns that are already out there?

Future debate moderators would better serve their audiences by not asking fear-based questions that have no relation to the candidates’ platforms and no relation to the gun safety policies voters are talking about. Questions, instead, should be informed by the fact that the majority of Americans support an array of gun safety proposals.