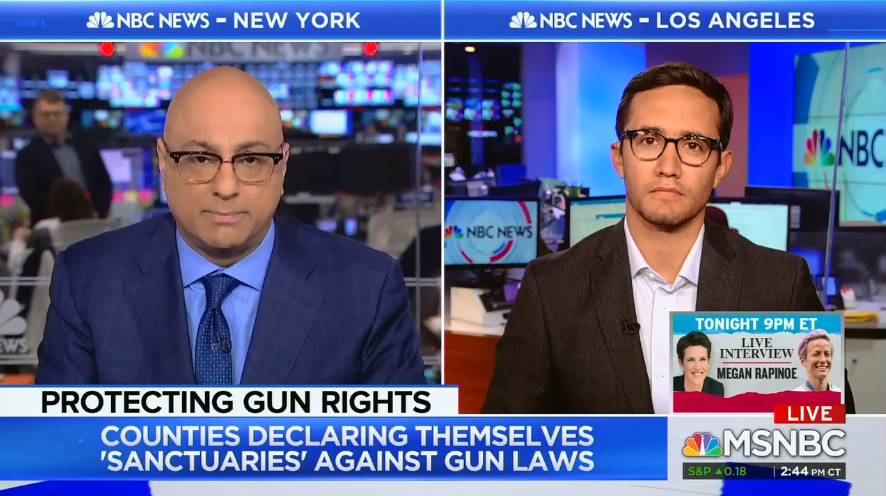 In a lengthy segment, MSNBC highlighted the growing trend of local sheriffs refusing to enforce gun safety laws they claim are unconstitutional. The segment focused on recent efforts in New Mexico to pass extreme risk protection order (ERPO) laws, which allow firearms to be temporarily taken from people who are a danger to themselves or others, but it failed to note that the National Rifle Association helps the New Mexico sheriffs behind the scenes and that these laws, which the sheriffs say violate people’s Second Amendment rights, are actually constitutional.

The July 9 segment looked at the trend that started off largely as a symbolic gesture after Effingham County, IL declared itself a “Second Amendment Sanctuary” in reaction to five gun safety bills were proposed in the state legislature. Since then, “more than half of the counties in Illinois have declared themselves gun sanctuaries,” and counties in 12 other states have also passed some form of a “Second Amendment Sanctuary” resolution. The sheriffs who support these resolutions insist what they’re doing is no different than what some “sanctuary cities” are doing as they refuse to participate in enforcement of federal enforcement of immigration.

But despite the similar names, there is a major difference between the immigration-related “sanctuary city” and the gun law-related “sanctuary county.” It is settled law that cities can decline to assist federal authorities in enforcing federal immigration law -- ironically because of an anti-commandeering constitutional principle established by an early 1990s NRA-backed lawsuit. But sheriffs in so-called sanctuary counties are refusing to enforce state laws, such as the ERPO, that have been declared constitutionally valid under the Second Amendment. While counties or individual sheriffs may claim the laws they refuse to enforce are unconstitutional, that claim does not come from any legal adjudication and is merely an opinion.

In the segment, MSNBC gave a platform to New Mexico Sheriff Tony Mace who drew a comparison -- without any pushback from the reporter -- between sanctuary cities and “Second Amendment sanctuary” counties, stating that even “bad people” have “constitutional rights that need to be protected”:

TONY MACE (CIBOLA COUNTY SHERIFF): So you have these sanctuary cities that basically say, “hey, you know, we’re going to ignore federal immigration laws,” right? And -- so why not have a Second Amendment sanctuary county that’s going to protect people’s constitutional rights.

MACE: It’s hard to say this, but even if they’re bad people, they still have rights -- constitutional rights that need to be protected. And as a sheriff and a law enforcement officer, that’s my job to protect those rights -- good, bad, or indifferent.

The MSNBC segment failed to mention that Mace is the chairperson of the New Mexico Sheriffs’ Association and has “received extensive and significant behind-the-scenes support from the NRA” in his “crusade” against the new gun violence prevention laws, according to the Brady group. Records obtained by the group show that “the NRA authored and sent Mace and the sheriffs documents such as op-eds to send to their local newspapers (in the sheriffs’ own names) and letters to send to state and local politicians opposing the GVP legislation.” In return, Mace asked New Mexico sheriffs to attend the NRA Institute for Legislative Action workshops. Mace also wrote an email to Democratic state Sen. Clemente Sanchez declaring, “The sheriff is the CEO of all the courts in his/her county and can easily strike down any court ruling or verdict as he sees fit,” echoing the language of the extreme anti-government Posse Comitatus movement.

In a live discussion following the packaged MSNBC segment, host Ali Velshi asked reporter Gadi Schwartz about the fear among New Mexico gun owners that any gun safety law will lead to confiscation (25 of the state’s 33 counties have passed gun sanctuary resolutions). The conversation revolved specifically around an ERPO law that passed the New Mexico state House in February but didn’t pass the state Senate.

Schwartz said gun owners “cling” to cases where red flag laws have been invoked and said they don’t want law enforcement taking their guns just “because somebody may say that they’re crazy”:

ALI VELSHI (HOST): The assumption that any red flag law, any kind of control whatsoever leads to a gun registry, which leads to confiscations of guns. How common is that in a place like New Mexico?

GADI SCHWARTZ (NBC REPORTER): They, you know -- they get a lot of their news from social media, and what they are seeing is those outlier cases where you do have police going in without necessarily a court order from a judge to try and take somebody’s guns in states where it has been decided that if somebody is claimed a threat, that the police can go in and try to remove those guns, and then there’s a shoot out, and somebody dies in their own home without ever going before a judge, without ever having due process. So, those are the types of cases that they see on social media and that they cling to saying that this is where the slippery slope begins. And they don’t want to see law enforcement coming into their homes because somebody may say that they’re crazy, to take their guns. So that’s kind of where their argument begins. But there’s -- those debates just go on and on, and it’s really interesting to hear these conversations because it really shows this divide between rural America and some of the urban areas that we’ve seen.

Schwartz failed to mention that most states where ERPO laws have already been passed also make it a crime to falsely petition for gun removal to ensure the law isn’t abused. Courts also require actual evidence -- not mere hearsay -- that the person is indeed a threat before ordering a temporary removal of firearm, and a final order of removal is issued only after a hearing is held and typically lasts up to a year.

While the details depend on the state, due process is built into the ERPO laws and orders require more proof than just someone claiming a person is “crazy.”