A chyron during MSNBC Live erroneously claimed that President-elect Donald Trump had acknowledged Russia’s alleged role in hacking designed to swing the 2016 election in his favor, but during the same segment his repeated refusal to do so was the main topic of conversation.

Trump has repeatedly and publicly refused to acknowledge Russia’s alleged hacking, despite mounting evidence to the contrary. On Friday, after being briefed about the intelligence community’s assessment that Russia sought to tilt the election in Trump’s favor, Trump released a muddled statement that largely downplayed Russia’s alleged actions. But you wouldn’t know that from MSNBC’s on-screen text. 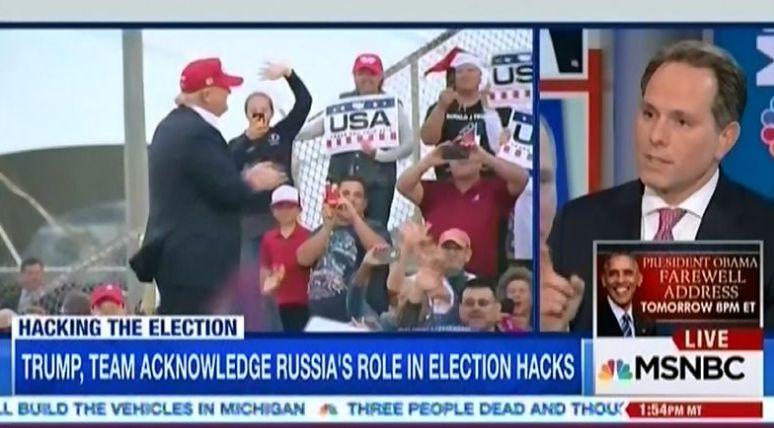 But in the accompanying segment, host Kate Snow and guest Jeremy Bash, former chief of staff at the Department of Defense, were largely focused on Trump’s repeated refusal to accept the findings presented by U.S. intelligence agencies.

Snow noted comments from senior Trump aide Kellyanne Conway indicating that Trump may roll back some of the sanctions imposed by President Obama in retaliation for the alleged election interference, and explained that other Republicans -- like Sen. John McCain -- have not shown the same reluctance to accept the conclusions of the intelligence agencies.

Snow also displayed a tweet Trump sent this weekend, in which he brushed off concerns about the hacking and said that “the only reason” it is a topic of conversation “is that the loss by the Dems was so big that they are totally embarrassed.” She then asked Bash if Trump would keep up “this kind of rhetoric” and continue “to be skeptical of all this” as he takes office.

In response, Bash told Snow that “in some ways, [Trump’s] statement Friday was a little better, because he actually didn’t dispute the core finding that Russia did try to hack our election, but I do think Trump team members will tell you -- and I’ve heard directly from them -- they see this in a political context.”

Trump’s official statement, issued immediately after his briefing on the topic, refused to place direct blame on Russia, instead muddling both their potential involvement in the hacking and the allegation that they did so with the intention of aiding Trump’s candidacy: “While Russia, China, other countries, outside groups and people are consistently trying to break through the cyber infrastructure of our governmental institutions, businesses and organizations including the Democrat National Committee, there was absolutely no effect on the outcome of the election including the fact that there was no tampering whatsoever with voting machines.”

As Politico reported, despite RNC chairman Reince Priebus’ statement that Trump accepted reports of Russia’s behavior,  “Trump has only indirectly acknowledged the intelligence community's conclusion that Russia interfered in the election and has consistently downplayed its significance — and the president-elect has a history of later contradicting what his surrogates tell the media.”

Yet MSNBC’s chyron told a different story, one at odds not only with Trump’s repeated statements on the topic during the campaign but also with his behavior since the first details of the intelligence community’s findings began to be publicized. The chyron focused the conversation on Trump’s fleeting, begrudging, and inadequate reference to Russia’s potential role in hacking, letting him off the hook for his months of obfuscation and avoid the larger question of why Russia wanted to help him.

As Brendan Nyhan, an assistant professor in the Department of Government at Dartmouth College who has “conducted several studies on fact-checking in recent years” explained to Poynter during the 2016 campaign when CNN began using chyrons to fact-check Trump in real time, it is crucial chyrons relay accurate information “because cable news chyrons often reinforce misleading messages or create doubt over relatively settled questions.”