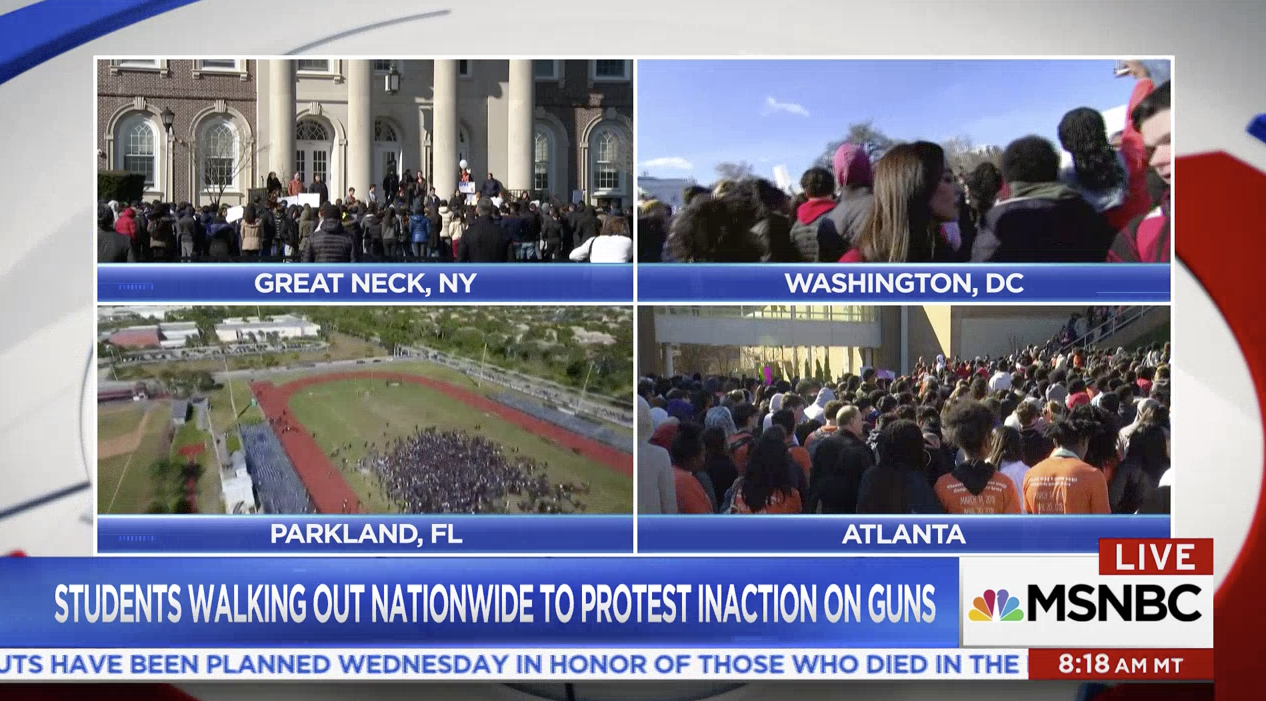 At 10 a.m. on March 14, K-12 students across the country walked out of their schools to honor the victims of the school shooting at Marjory Stoneman Douglas High School in Parkland, FL, and to protest everyday gun violence in America. MSNBC devoted the full hour to the protest, not even breaking for commercials. CNN spent significant time on the story, interviewing students and highlighting the national nature of the movement. Fox News devoted only a couple of brief headline segments to the events.

MSNBC opened the 10 a.m. hour of programming by noting, “You've got demonstrations planned at schools from Maine to Miami, Houston to Honolulu.” The network had correspondents located in Great Neck, NY; Washington, D.C.; Atlanta, Georgia; and Parkland, FL, and its coverage featured interviews with students who were walking out. MSNBC’s coverage of the protests was uninterrupted from 10 to 11 a.m.

CNN’s coverage also began promptly at 10, with correspondents across the country covering the student walkouts. CNN interviewed Sam Zeif, a Marjory Stoneman Douglas student who noted he still doesn’t feel safe in school, as well as other student protesters from around the country. The walkout was the only story covered on CNN from 10 to 10:26 a.m.

But coverage looked drastically different on Fox News. Fox’s programming continued as usual, focusing on the upcoming confirmation hearing for CIA Director Mike Pompeo to serve as secretary of state, the Pennsylvania special congressional election, and the probe into Russian meddling in the 2016 election. There was a “Fox News Alert” about the walkout at 10:03, but by 10:04, the network had moved on to another “Fox News Alert,” this time about Pennsylvania’s special election still being too close to call. Fox again ran a headline segment about the protests at 10:15, which also lasted just over one minute, and just one more brief segment later in the hour.

In total, during the 10 a.m. hour, MSNBC spent the full 60 minutes on the student protests, not even breaking for commercials, CNN spent just over 21 minutes on the protests, making it the most dominant story of the hour, and Fox News devoted just five and a half minutes to the story.

There will be other student-led national events against gun violence in the coming weeks, including the March for Our Lives on March 24 and the National High School Walkout on April 20.