November 6, 2012 will likely be remembered as one of the most significant turning points for LGBT equality in American history. But you probably wouldn't know that if you were only watching Fox News on election night.

According to an Equality Matters analysis, Fox News underreported or completely ignored last week's historic victories for the LGBT community.

Maine, Maryland, and Washington became the first states in the country to embrace marriage equality through a popular vote, and Minnesota defeated a state constitutional amendment that would have defined marriage as between a man and a woman. In response to these victories, Human Rights Campaign president Chad Griffin remarked “Years from now we'll remember this Election Day as the most important and the most historic in the history of the LGBT movement." 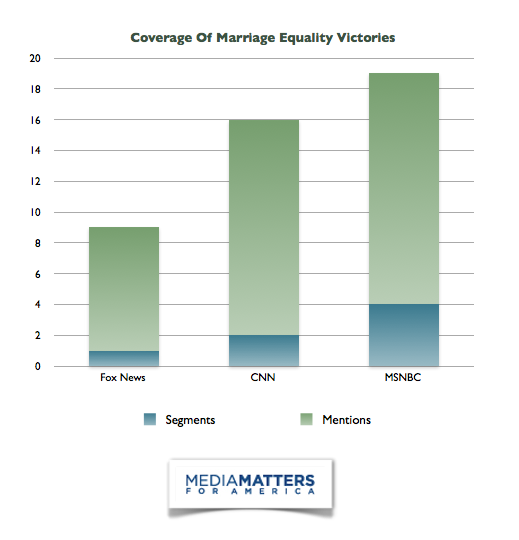 On Fox, however, these victories were largely footnoted, lumped into segments that quickly cycled through Tuesday's smorgasbord of ballot initiative results. Fox's Shepard Smith eventually called Washington's marriage vote a "victory for civil rights" two days after Election Day, but his fellow Fox hosts seemed more interested in demonizing Obama voters than reporting on the biggest wave of same-sex marriage victories ever in America.

Fox's coverage was even worse when it came to the election of Rep. Tammy Baldwin (D-WI) as the country's first ever openly gay U.S. senator. Baldwin's election is undoubtedly a watershed moment in the history of LGBT equality movement, which has for decades struggled for representation in the halls of the federal government.

On Fox, Baldwin's election merited one mention - the announcement of her victory - during which the network failed to even identify Baldwin as gay. Watch:

In a blog post the night after the election, AMERICAblog's John Aravosis asked if the media was still "playing catch-up" on reporting the massive victories for the LGBT community. In the case of Fox News - which has repeatedly ignored advancements in LGBT equality - it appears to be more than just a case of journalistic laziness.