On August 21, Republicans announced that a portion of the Republican National Convention would be devoted to pushing the discredited Fox News-fueled myth that President Obama insulted business owners when he said, “you didn't build that.” After the announcement, references to Obama's “you didn't build that” comment spiked drastically on Fox News, while other cable news networks mentioned the deceptively edited comments significantly less.

Fox News: “GOP Convention Session To Be Themed 'We Built This.' ” In an August 21 FoxNews.com article, Wes Barrett reported that an RNC official told Fox News that the theme for Tuesday at the Republican National Convention will be “We Built This”:

The GOP is turning what some see as a presidential slight aimed at business owners and entrepreneurs into a theme for a night of the Republican National Convention next week, titling Tuesday night's session “We Built This!” [FoxNews.com, 8/21/12]

GOP's “We Built This” Theme Stems From A Fox News Falsehood

Fox News: “We Built This” Theme Is A Response To Obama's Comments About How Businesses Succeed In America. FoxNews.com reported that the convention theme was based on comments President Obama made during a July campaign appearance in Roanoke, VA:

The theme and list of speakers are meant to directly contrast comments President Obama made in Roanoke, Virginia last month. Describing what he noted as the federal government's role in helping the private sector, the president pointed to infrastructure and education.

“Somebody helped to create this unbelievable American system that we have that allowed you to thrive,” the president said of business owners. “Somebody invested in roads and bridges. If you've got a business -- you didn't build that. Somebody else made that happen.” [FoxNews.com, 8/21/12]

Fox Distorted Obama's “You Didn't Build That” Comments Into An Attack On Business Owners. Fox News deceptively edited President Obama's July 13 comments to portray them as an attack on small business owners, telling them “if you have a business, you didn't build that.” The full context of Obama's comments make clear he was referring to public infrastructure. The Romney campaign quickly adopted the Fox falsehood that Obama had attacked business owners. [Media Matters, 8/21/12]

Fox Mentions “You Didn't Build That” 78 Times In The Week Leading Up To The GOP Convention. Fox's mentions of “You Didn't Build That,” “We Built This,” or other references to President Obama's deceptively edited comments spiked drastically after the Republicans announced their convention theme. The day before the announcement, Monday, August 20, Fox only mentioned Obama's comments four times. By contrast, on the day of the announcement and the day following the announcement, Fox's coverage of “you didn't build that” or of the convention theme saw a drastic spike, coming up 21 and 26 times, respectively.

The total number of mentions of the President's edited remarks or the theme of the GOP convention during the week of August 20-24 was 78 times. 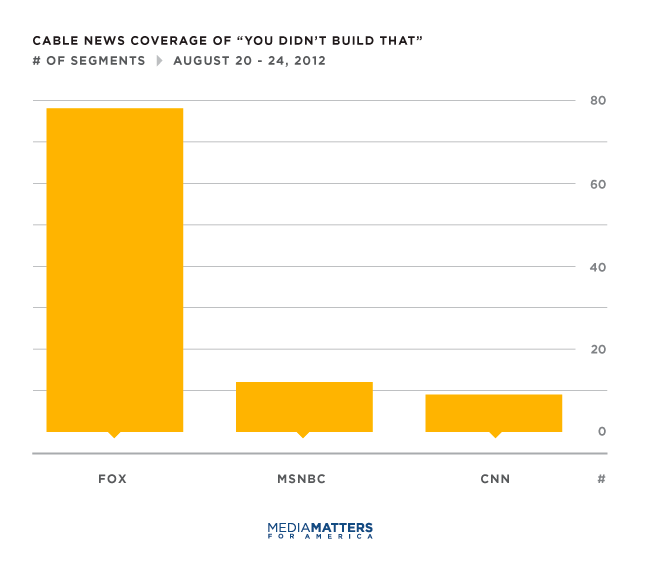 METHODOLOGY: Media Matters conducted a search of closed captioning transcripts for all of CNN, MSNBC and Fox's programming between Monday, August 20 and Friday, August 24. Search terms included “build that,” “you didn't build that,” and “we built it.” Recordings of the relevant segments were reviewed to determine whether Obama's comments or the Republican convention theme were referenced. Repeats of CNN, MSNBC and Fox shows that occur overnight were not included in the results.