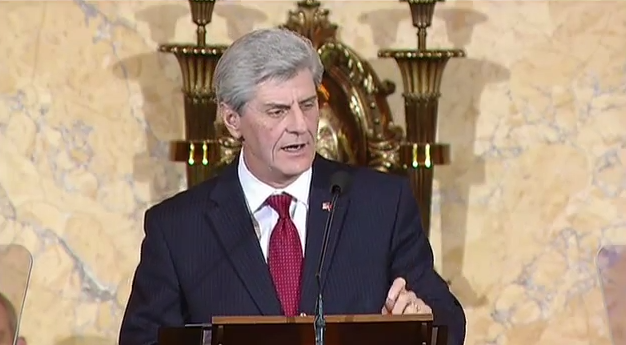 Less than two months after national media outlets spotlighted the debate over Arizona's proposed license-to-discriminate measure, CNN and Fox News completely ignored the passage of a similar measure in Mississippi that effectively sanctions the refusal of services to LGBT people.

On April 3, two days after the state legislature sent the bill to his desk, Gov. Phil Bryant (R-MS) signed the Mississippi Religious Freedom Restoration Act in a private ceremony attended by anti-gay hate group leader Tony Perkins of the Family Research Council (FRC). The law prohibits state actions that “substantially burden a person's right to the exercise of religion.” According to legal experts, the law could allow, say, a health care worker to refuse fertility treatment to same-sex couples on the grounds that providing such care constituted a substantial burden on the worker's religion.

But that was good enough for the FRC's Perkins, who lavishly praised the bill as a defense of religious liberty against things like same-sex marriage.

During the debate over Arizona's SB 1062, cable news networks extensively covered the controversy surrounding the measure. CNN ran multiple segments highlighting the anti-gay group behind the measure and grilled supporters of the bill about its impact on gay and lesbian customers. Even Fox News noted that the law might be an example of right-wing overreach, calling it "profoundly unconstitutional" and "potentially dangerous." 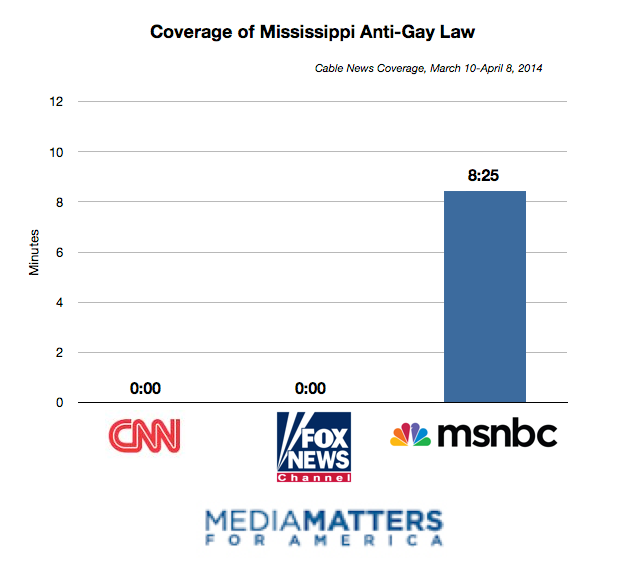 CNN and Fox's failure to cover the Mississippi law is the latest reminder of the media's short attention span. Mere weeks after key Fox personalities condemned the Arizona bill, many of those same personalities went right back to defending anti-gay discrimination this week, after the U.S. Supreme Court refused to reconsider a New Mexico Supreme Court ruling that a photographer had violated the state's non-discrimination law by refusing to photograph a same-sex commitment ceremony.

CNN, meanwhile, continues its hours upon hours of obsessive speculation over the missing Malaysian jetliner.

As Mississippi wages war on LGBT citizens' basic rights, two of the nation's leading news outlets apparently have nothing better to offer than silence.

Equality Matters searched transcripts on TVEyes between March 10 and April 8 for the term “Mississippi.” Reruns and teases for upcoming segments were excluded.