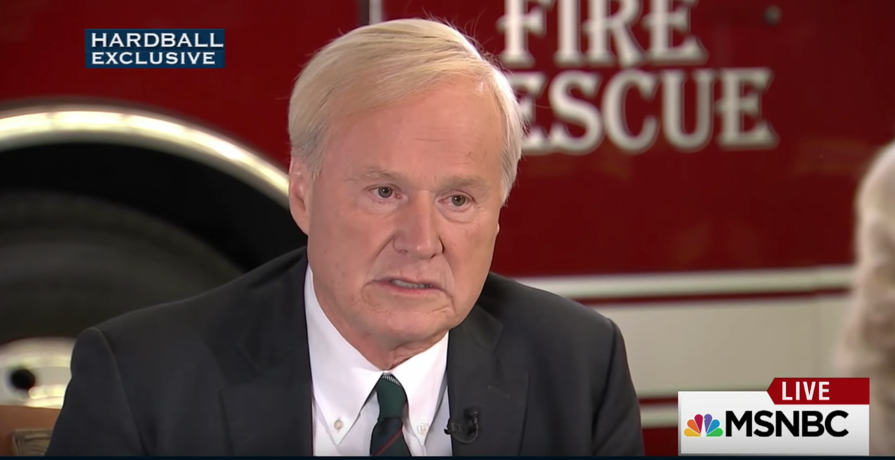 MSNBC’s Chris Matthews, currently under fire for making a comment about slipping then-Democratic presidential candidate Hillary Clinton a “Bill Cosby pill,” has a long history of misogynistic and sexist commentary.

Matthews, the longtime host of Hardball, is seen asking for “some of the queen’s water’s,” commenting, “Where’s that Bill Cosby pill I brought with me?” and then laughing in network footage obtained by New York magazine’s The Cut during the setup for a January 5, 2016, interview with Clinton.

Matthews has since apologized for the remark. “This was a terrible comment I made in poor taste during the height of the Bill Cosby headlines,” Matthews told The Cut, in reference to the dozens of women who said the comedian sexually assaulted them, some of whom said he had drugged and raped them. He added, “I realize that’s no excuse. I deeply regret it and I’m sorry.”

The video is consistent with reports that Matthews has a pattern of making objectifying and derogatory comments about female guests and staff off-camera. In 1999, NBC reportedly paid $40,000 to settle with an assistant producer for his program after the host made inappropriate comments to her.

Matthews’ on-air commentary has long been marred by a seemingly endless litany of degrading remarks about the physical appearance of his guests, colleagues, and subjects, as well as virulently sexist attacks on women in politics. I’ve curated some of the worst in this twitter thread:

In light of the footage of MSNBC's Chris Matthews joking about his “Bill Cosby pill” before an interview with Hillary Clinton, I'm going to tweet some of his sexist and misogynistic comments from our archives.

This will take a while. 1/too manyhttps://t.co/omBdd0WLXG

This is not even the first time Matthews has apologized for sexist comments directed at Clinton. In January 2008, he said that Clinton was not elected to the U.S. Senate on “her merit,” but rather because “her husband messed around.” Following a firestorm, he admitted that his statement had been unfair, and promised to do better in the future, saying, “If my heart has not always controlled my words, on those occasions when I have not taken the time to say things right, or have simply said the inappropriate thing, I'll try to be clearer, smarter, more obviously in support of the right of women -- of all people -- the full equality and respect for their ambitions. So, I get it.”