A Media Matters study of the use of the term “illegal immigrant” or any of its variations on cable evening programming found that in the first seven months of 2017, CNN, MSNBC, and Fox News described undocumented immigrants using that derogatory terminology 1,296 times, despite calls to end the practice from journalistic guidelines and linguists for its dehumanizing effects and its grammatical inaccuracy. Fox News was by far the worst offender, using the disparaging terms 1,107 times from January 1 to July 31, 2017. CNN and MSNBC used the denigrating terms 102 and 87 times, respectively, in the same time period. 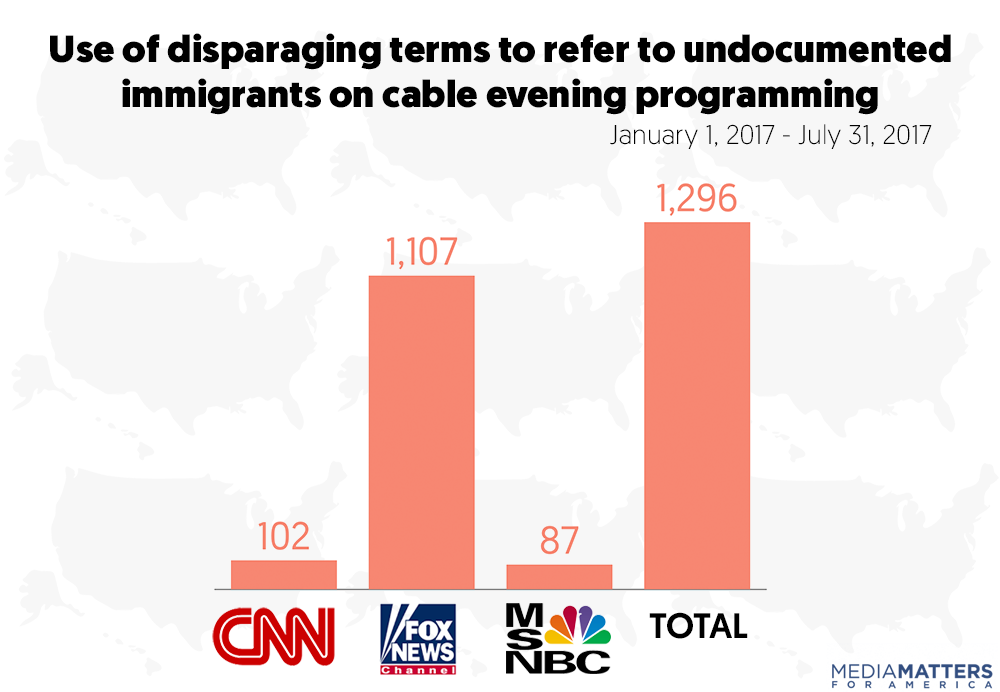 Media organizations, linguists, and the Library of Congress call the practice of describing a person as “illegal” “dehumanizing,” “pejorative,” and “grammatically incorrect”

AP Stylebook guidelines state that “‘illegal’ should describe only an action, not a person." In April 2013, as a result of the “Drop the I-Word” (DTIW) campaign launched by the national racial justice organization Race Forward, The Associated Press (AP) announced that it had changed its style guidelines, writing that one should use the term illegal “only to refer to an action, not a person.” From the AP blog post (emphasis original):

illegal immigration Entering or residing in a country in violation of civil or criminal law. Except in direct quotes essential to the story, use illegal only to refer to an action, not a person: illegal immigration, but not illegal immigrant. Acceptable variations include living in or entering a country illegally or without legal permission. [The Associated Press, 4/2/13; Colorlines, 4/2/17; Media Matters, 1/23/17]

DTIW’s journalist guide exhorts writers to avoid using the word “illegal” in immigration reporting. In its newly updated style guide for journalists, the Drop the I-Word campaign says writers should avoid using “illegal” to describe people in their immigration reporting. The guide instead says to “use terms that are legally accurate and avoid racially and politically charged labels.” [ Drop the I-Word, “Journalist Style Guide for Covering Immigration,” accessed 9/13/17]

Library of Congress announced it will cancel the heading “illegal aliens,” noting that the term is “problematic” and “pejorative.” On March 22, 2016, the Library of Congress responded to a grass-roots effort focused on removing the term “illegal alien” from the library’s subject headings, writing in a statement (emphasis original), “The heading Illegal aliens will … be cancelled and replaced by two headings, Noncitizens and Unauthorized immigration.” The statement further noted, “The phrase illegal aliens has taken on a pejorative tone in recent years, and in response, some institutions have determined that they will cease to use it.” [Library of Congress, 3/22/16; Media Matters, 1/23/17]

National Association of Hispanic Journalists issued a reminder to journalists not to use “pejorative terms” in their immigration coverage. The National Association of Hispanic Journalists (NAHJ) issued a statement on June 23, 2016, reminding journalists not to use “pejorative terms like ‘illegals' -- which is shorthand for ‘illegal aliens,’ another term NAHJ objects to using -- to describe the estimated 12 million undocumented people living in the United States.” NAHJ explained that “using ‘illegals’ in this way is grammatically incorrect and crosses the line by dehumanizing and criminalizing the person, not the action they are purported to have committed.” The NAHJ added, “By incessantly using metaphors like ‘illegals,’ the news media is not only appropriating the rhetoric used by people on a particular side of the issue, but also the implication of something criminal or worthy of suspicion.” [Media Matters, 1/23/17, 6/24/16]

Media Matters analyzed Nexis transcripts of CNN, Fox News, and MSNBC’s weekday programming between 5 p.m. and 11 p.m. from January 1, 2017, through July 31, 2017, searching for uses of the terms “illegal immigrants,” “illegal aliens,” and “illegals” and counting every time the denigrating terminology was used in the context of unlawful immigration. We counted any instance in which a speaker described a person as “illegal” but did not include the use of such terms as “illegal immigration” in which an action, and not a person, was described as illegal. Only original uses of the disparaging term were counted, meaning that the use of the denigrating terminology in a previously aired video clip (e.g. from a public event and not from an exclusive interview with the network) or in a direct quote did not qualify. Instances in which a person used the terminology to explain why it should not be used were also not counted. Special programming such as town hall events were not included in the analysis. Throughout the study, the derogatory phrase “illegal immigrant” frequently appeared in the context of Donald Trump’s false claim that Barack Obama was born in Africa. Those situations were included in the final count.