During their coverage of the 2012 GOP primary, cable news networks regularly called upon Tony Perkins, president of the Family Research Council (FRC), to provide commentary on behalf of social conservatives. Perkins made 56 appearances on CNN, Fox News, and MSNBC over the course of the primary, but never once was identified as the leader of an anti-gay hate group.

Tony Perkins Made 56 Television Appearances Over The Course Of The GOP Primary. According to an Equality Matters analysis, during the period between the first Republican presidential debate on May 5, 2011 and the Republican nomination in August, Tony Perkins appeared on CNN, Fox News, and MSNBC a total of 56 times to discuss the GOP primary: 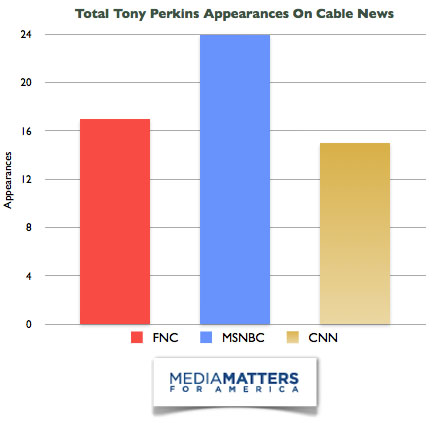 Perkins Regularly Acted As A Representative Of Evangelical, Socially Conservative Voters. In the overwhelming majority of segments, Perkins is featured as a spokesman for socially conservative and evangelical voters: 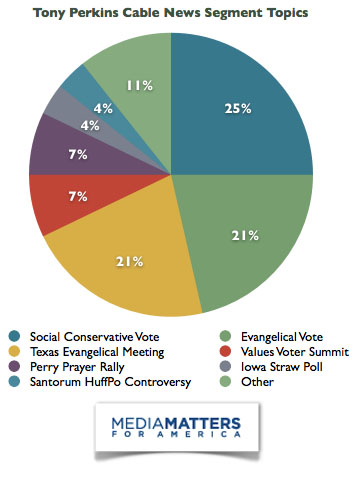 The number of Perkins's appearances spiked in January after it was reported that he would be attending a meeting of evangelical leaders in Texas to discuss which Republican candidate they should endorse: 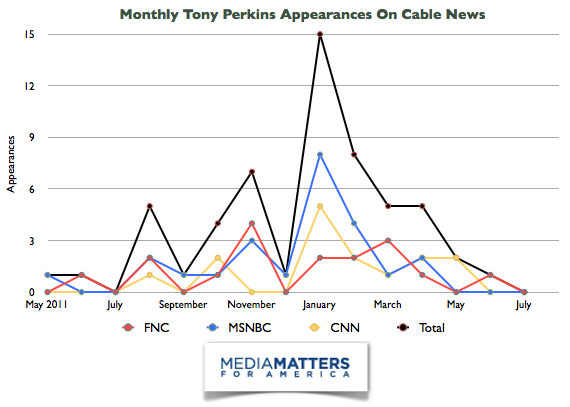 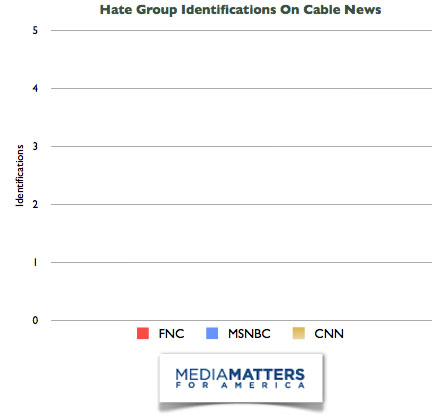 SPLC: FRC's “Specialty Is Defaming Gays And Lesbians.” From an October 7 SPLC report:

The Family Research Council (FRC) bills itself as “the leading voice for the family in our nation's halls of power,” but its real specialty is defaming gays and lesbians. The FRC often makes false claims about the LGBT community based on discredited research and junk science. The intention is to denigrate LGBT people in its battles against same-sex marriage, hate crimes laws and anti-bullying programs. To make the case that the LGBT community is a threat to American society, the FRC employs a number of “policy experts” whose “research” has allowed the FRC to be extremely active politically in shaping public debate. [...]

The FRC also strongly promotes the “ex-gay” movement as a way to combat LGBT civil rights measures, though professional organizations have repeatedly called so-called “reparative therapy” (which seeks to turn gays and lesbians into heterosexuals) into question and issued statements that don't support it. [...]

Part of the FRC's recent strategy is to pound home the false claim that gays and lesbians are more likely to sexually abuse children. This is false. The American Psychological Association, among others, has concluded that “homosexual men are not more likely to sexually abuse children than heterosexual men are.” That doesn't matter to the FRC, though. [SPLC Report, “The Anti-Gay Lobby,” 10/7/11, via LGBTQNation, emphasis added]

Perkins Has Consistently Pushed Anti-Gay Propaganda. As president of FRC, Perkins has promoted a number of vile and hateful smears about gays and lesbians, including:

SPLC: Perkins Has Ties To Anti-Abortion Extremists And A White Supremacist Organization. Perkins is reported to have “failed to report an illegal conspiracy by antiabortion activists to his superiors” while acting as a reserve police officer in Baton Rouge in 1992. Perkins also gave a speech to the Louisiana chapter of the Council of Conservative Citizens, a white supremacist group that once described African-Americans as a “retrograde species of humanity.” [SPLC Report, “The Anti-Gay Lobby,” 10/7/11, via LGBTQNation]

Equality Matters searched news transcripts provided by Nexis, TV Eyes, and SnapStream for the name “Tony Perkins” between May 5, 2011 (the first debate of the GOP presidential primary) and August 28, 2012 (Romney's nomination). For programs that were not available in those search databases, we conducted a search through our internal archives. The results do not include segments that were not focused primarily on the Republican primary race.