Despite major developments in HIV/AIDS prevention, treatment, and research in 2013, cable evening news shows devoted scant time to covering developments in the fight against HIV/AIDS in 2013. The lack of coverage of HIV/AIDS stories has continued into the first quarter of 2014.

American South Is Facing An HIV “Epidemic.” Though new HIV infections are on the decline through much of the United States, southern states continue to face an HIV “epidemic” due in part to lack of support and funding for basic HIV prevention and treatment efforts. [The New Yorker, 4/10/14]

Debate Intensifies Over Daily HIV Prevention Pill. Despite being approved as effective by the Food and Drug Administration in 2012, the daily HIV prevention pill Truvada has generated opposition from some HIV/AIDS activists, who fear Truvada's effectiveness may encourage users to engage in risky sexual behavior. [The New York Times, 12/30/13]

CDC Officials Agree To Stop Referring To Sex Without Condoms As “Unprotected Sex.” In a January 23, 2014 phone meeting, officials at the Centers for Disease Control and Prevention agreed to stop using the term “unprotected sex” to mean “sex without condoms,” reflecting new HIV prevention and risk strategies. [The Bay Area Reporter, 2/13/14]

ACA Could Dramatically Alter Federal And State HIV Programs. The Affordable Care Act (ACA) broadens healthcare for many Americans living with HIV, raising significant questions about the future of the landmark federal Ryan White program, which has primarily been used to purchase health coverage for uninsured HIV clients. Funding for the Ryan White program could be diverted for other HIV/AIDS efforts, or the program could face termination if it's no longer deemed necessary. [Stateline, 10/28/13]

Second Baby's HIV In Remission After Early Antiretroviral Drugs. A second baby's HIV was sent into remission as a result of being treated with antiretroviral drugs just after the child's birth. The success of the treatment follows an earlier case of a Mississippi child who was reportedly cured of HIV after undergoing early antiretroviral treatment. [RT, 3/6/14]

First Confirmed Case Of Lesbian HIV Transmission Reported. On March 13, federal health officials confirmed the first case of a lesbian transmission of HIV, prompting the Centers for Disease Control to advise that all infected people having sex with uninfected people stay on antiretroviral drugs. [The New York Times, 3/14/14]

Experimental Vaccine Apparently Cures 9 Of 16 Monkeys Infected With Close Relative Of HIV. An experimental new vaccine produced promising results after nine out of 16 test monkeys appeared to be “cleared” of the virus after receiving the treatment. [The New York Times, 9/16/13]

Study Shows Genes Could Be Altered To Fight Infection. A new report suggests that “gene editing,” a treatment that disables particular human genes, might help people infected with HIV combat and even rid themselves of the virus. Researchers caution that widespread use of the technique as a treatment for HIV is still “a long way off.” [The New York Times, 3/5/2014]

HIV Returns After Two Patients Appear Cured Through Bone-Marrow Transplants. Two patients in Boston appeared to have had their HIV in remission after receiving bone-marrow transplants for blood cancers. Unfortunately, their HIV returned months later. [The New York Times, 12/6/13] 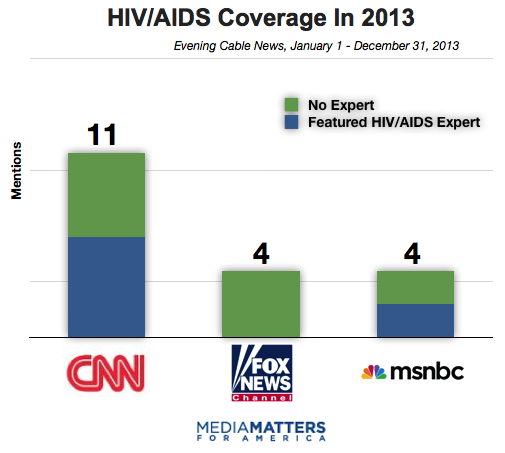 Less Than Half Of HIV/AIDS Stories Featured Expert Commentary. Of the 19 discussions of HIV/AIDS on cable evening news during 2013, less than half featured commentary from an expert on HIV/AIDS.

Cable News Ignored HIV/AIDS Stories In The First Quarter Of 2014. Between January 1 and March 31, 2014, CNN and MSNBC ran one story on HIV/AIDS during their weekday evening news shows. Fox News has yet to run an HIV/AIDS story during the first quarter of its 2014 evening news programming: 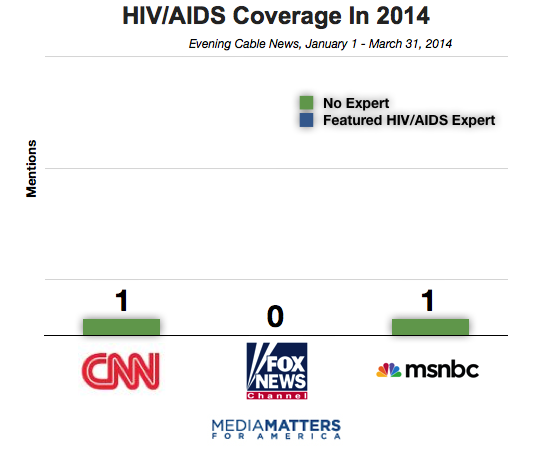 Media Matters searched news transcripts on Nexis between January 1, 2013 and March 31, 2014, using the search term “allcaps(HIV) or allcaps (AIDS)” during CNN, MSNBC, and Fox News' weekday evening news broadcasts. All segments that focused on stories involving HIV/AIDS prevention, treatment, research, and history were included. Crime stories involving HIV/AIDS, including the story of a man who was accused of knowingly infecting partners with HIV, were excluded. Passing mentions, teases for upcoming segments, and reruns were excluded.

For the purposes of the study, guests who were medical professionals, activists, or organizational leaders specializing in HIV/AIDS were considered “experts.”