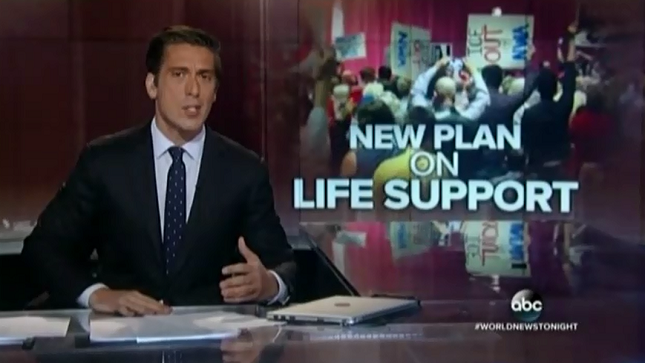 Immediately after Senate Republicans unveiled a new draft of their plan to repeal the Affordable Care Act (ACA), cable and broadcast newscasts framed reports about the bill around the challenges it faces in the legislative process, including vote counts and optics, rather than personal stories from those who would be most affected by the bill. However, the programs did use the opportunity to cover key changes to and consequences of the bill.

Senate Republicans on July 13 introduced a new draft of their bill to repeal and replace the ACA, which includes key changes surrounding health savings accounts and ways for insurers to offer more bare-bones policies. While the bill has changed a bit, the media coverage has largely stayed the same. Once again, media are continuing to focus on the process surrounding the bill and largely ignoring personal stories from those most affected. Unlike with previous coverage, cable and broadcast news did focus on the new changes in the bill and their potential consequences for Americans. MSNBC in particular provided more context and information about the bill than other networks.

During the July 13 newscasts, just hours after the new draft plan was introduced, broadcast news shows framed their coverage around the legislative process and optics of the bill. NBC’s Lester Holt introduced a report on the bill on NBC Nightly News by noting that “Republicans face a crucial battle for votes in their own party” over the bill. CBS’ Anthony Mason said the bill was “already in critical condition” on CBS Evening News because of the lack of Republican support. And ABC’s Mary Bruce framed her report on the new bill by pointing out that it faces “the same old problem: Can it get the votes to pass?”

Like previous coverage, broadcast newscasts largely neglected to offer personal anecdotes from people who would be most affected by the bill. One exception was CBS Evening News, which followed its coverage of the bill with a segment on how Kentuckians would be “hard hit” by its Medicaid cuts.

Network newscasts did do an exemplary job of highlighting the consequences of and new changes in this newest draft of the bill, however, including provisions that would allow “the return of skimpy junk insurance policies and discrimination against people with pre-existing conditions,” according to HuffPost, and expand the use of health savings accounts, which have been found to “primarily benefit the wealthy, the healthy, and the educated.”

Like broadcast newscasts, the 6 p.m. hour of cable news coverage framed the unveiling of the bill largely around vote counting and optics. Fox News’ Bret Baier introduced a panel discussion of the bill on Special Report by explaining that the GOP “can only afford to lose one more vote” to pass the bill. Earlier in the program, Baier set up a report on the bill by highlighting “the continued internal dissent” surrounding the bill. MSNBC’s Ali Velshi framed his discussion of the bill on MSNBC Live by saying that it “is hanging by a thread” in terms of votes. CNN’s Jim Acosta opened a segment on the bill by stating that Republicans are “increasingly optimistic about its prospects.” Acosta even conducted an interview with Sen. Ben Cardin (D-MD) and asked only about the prospects the bill would pass, not the actual policies it contains.

Like broadcast newscasts, cable coverage was also largely devoid of personal stories from those most affected. However, cable coverage did highlight several changes that are included in this draft of the bill and the consequences of the provisions. MSNBC, especially, excelled in this area, hosting Dr. Kavita Patel, medical director of Sibley Primary Care in Washington, D.C., who noted that this bill “does cause a death spiral … by allowing for insurance plans to sell … catastrophic insurance.”

MSNBC also hosted Virginia Gov. Terry McAuliffe, a Democrat, who pointed out that the bill negatively impacts state budgets, like in Virginia.