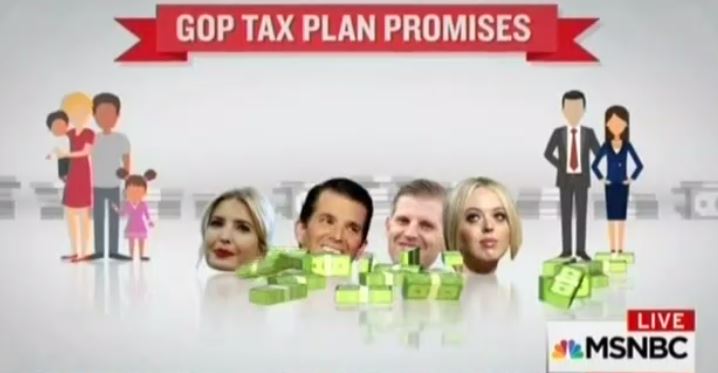 MSNBC hosts Ali Velshi and Stephanie Ruhle thoroughly debunked conservative talking points about the Republican Party’s pro-corporate tax policy during an interview with an ill-prepared member of Congress, who was attempting to build support for his party’s proposed tax changes that overwhelmingly favor the wealthy.

During the December 4 edition of MSNBC Live with Velshi and Ruhle, Velshi presented a detailed outline of the many ways in which Republican tax bills in the House and Senate will fall short of GOP promises and commitments. Velshi noted that numerous independent analyses have shown the GOP plans will add upwards of $1 trillion to the national debt, and pointed out that despite “huge changes made to our tax code … we’ve seen no observable shift to long-term growth rates in the last 150 years.” Velshi also pointed to a survey conducted by the University of Chicago’s Booth School of Business, which found that none of the 42 leading economists surveyed believe the plans will be able to boost economic growth rates by enough to make up for lost revenue. He concluded the segment by pointing to a recently-released Goldman Sachs analysis of the Senate tax bill, which concluded that economic growth stemming from the tax bill will be lower than Republicans have claimed, and, as Velshi stated, “possibly even … negative” after a few years:

Immediately after outlining all the problems in the GOP tax plans, MSNBC invited Rep. Chris Stewart (R-UT) on the program and gave him an opportunity to defend his party’s policy priorities. Stewart’s performance did not go as he might have anticipated, with co-hosts Velshi and Ruhle taking turns debunking GOP talking points and pillorying Stewart’s excuses for the tax plan.

The co-hosts rebuffed Stewart’s repeated assertions that tax cuts for profitable corporations and wealthy individuals will boost economic growth (a 2012 Congressional Research Service study found no correlation between income tax rates and economic growth, and a 2014 study from the Brookings Institution argued the relationship between tax cuts and growth was “theoretically uncertain”), they corrected his false claim that the United States has the world’s highest corporate taxes (effective corporate rates are the same as other developed countries), and they called out his false claim that “the American people want us to do this” (the GOP tax plans are actually extremely unpopular). When Stewart claimed the GOP plans are effective in simplifying the tax code, Ruhle challenged him over and over to name a single corporate loophole that is being removed (he couldn’t), and both co-hosts stung Stewart over how Republican plans fail to address the so-called “carried interest” loophole, which helps extremely high-income individuals avoid paying taxes on some of their income.

By the end of his nearly 11-minute grilling, Stewart was actually defending the discredited theory of “trickle-down economics” by name, which Velshi correctly noted was such a disaster in Kansas that the state’s Republican-dominated legislature had to abandon their conservative tax agenda.

This takedown from Velshi and Ruhle is not the first time the MSNBC duo has discredited the GOP’s hollow economic message. Both Velshi and Ruhle have spent considerable time over the past several months pointing out that the Republican agenda favors wealthy individuals, profitable corporations, and the Trump family at the expense of lower- and middle-income Americans. This important work in correcting purposeful misinformation about the GOP's right-wing agenda is all the more important as Republican lawmakers prepare to enact tax policy changes that could affect millions of Americans for years to come.