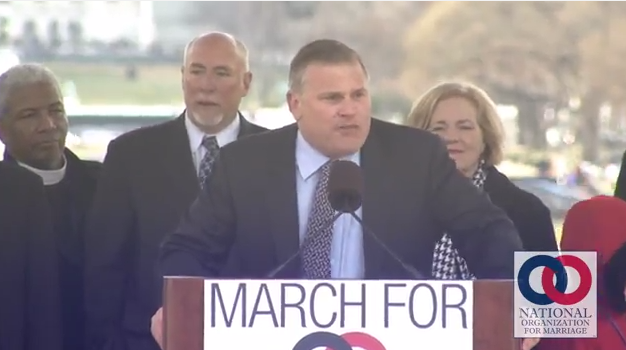 On June 19, the National Organization for Marriage (NOM) will hold its second March for Marriage in Washington, DC. Though the march has nabbed some high-profile speakers, journalists covering the event should know that it's likely to be a largely astroturfed affair.

Earlier this year, NOM announced its plan to organize a second March for Marriage to demonstrate that there's still “deep and wide support” for opposing same-sex marriage, despite polls showing a growing majority of Americans in favor of marriage equality.

The march is slated to feature high-profile speakers like Fox News host Mike Huckabee and 2012 GOP presidential runner-up Rick Santorum. In local press appearances, NOM employees have touted the event as a show of grassroots support for traditional marriage. In reality, the media should know that NOM's marriage march will feature some of the country's most extreme anti-gay voice. Here's what reporters can expect from this year's March for Marriage:

Look no further than last year's march. Even as the Supreme Court took up challenges to the Defense of Marriage Act (DOMA) and California's Proposition 8, NOM struggled to muster enthusiasm for the event. While NOM's Thomas Peters declared that 15,000 people had turned out for the march and NOM president Brian Brown estimated there were “more than 10,000” attendees, the Washington Blade estimated a turnout of only 2,000.

Church Groups Bussed In To “Visit The Monuments!”

Many of the attendees at the 2013 march were bussed in from New York City - free of charge - by anti-equality State Sen. Ruben Diaz (D-NY). Diaz claimed to have sent 32 busloads of primarily Latino New Yorkers to the rally; other attendees included Chinese Christians from Chicago and French activists flying their country's flag at a rally purportedly focused on the anti-equality fight in the United States.

This year's march is unlikely to be much different. Diaz has promised to dispatch 100 buses from the Bronx, posting a Spanish-language YouTube video promising rally-goers an all-expenses-paid trip. In the video, Diaz urges New York Latinos to "[a]sk for your bus! Fill the bus! And let's go to Washington! Let's go on a trip! Visit the monuments in Washington and testify that Jesus heals and saves and is the king we await."

In 2012, a leaked internal memo uncovered by the Human Rights Campaign laid out NOM's strategy to "drive a wedge between gays and blacks" and motivate Latino opposition to marriage equality. That strategy will likely be on display at this year's march. One of the speakers at NOM's rally will be Rev. Bill Owens, head of the Coalition of African-American Pastors, a NOM front-group that specializes in depicting African Americans as opposed to marriage equality. Owens will be joined by Bishop Harry Jackson, another NOM-linked race baiter who blames "rich white guys" for promoting same-sex marriage.

Owens and Jackson will be joined by a roster of speakers known for virulent anti-gay activism. That list includes American Values President Gary Bauer, who condemns homosexuality as a "destructive lifestyle," and Doug Mainwaring, a gay man who believes marriage equality is an "objective evil." Other speakers include Ryan T. Anderson, the Heritage Foundation's in-house champion of anti-LGBT discrimination and a promoter of “ex-gay” therapy, as well as California pastor Jim Garlow, who recently returned from a trip to Singapore to speak to an organization working to keep homosexuality criminalized there.

Among the most controversial appearances at the march will be that of San Francisco Archbishop Salvatore Cordileone. House Minority Leader Nancy Pelosi (D-CA), a Roman Catholic, signed a letter calling on Cordileone to cancel his speech at the event, noting the "disdain and hate towards LGBT persons" demonstrated by many speakers at the march. A number of Bay Area religious leaders have also called on Cordileone to withdraw from the march, citing NOM's history of extreme and hateful anti-gay rhetoric. Nearly 30,000 people have signed a Faithful America petition asking Cordileone not to attend the rally.

NOM might imagine its March for Marriage as a pivotal opportunity to show that the fight for anti-gay discrimination remains strong, but the event's astroturfed attendance and divisive speakers underscore the anti-equality movement's sorry state of affairs. Even anti-gay stalwarts are acknowledging the unmistakable trend lines; NOM co-founder Maggie Gallagher and Jennifer Roback Morse, whose Ruth Institute served as NOM's educational arm until last year, have both conceded the inevitability of nationwide marriage equality.