When Fox News executives face criticism of the network’s destructive, unethical, and propagandistic right-wing hosts, they often respond by pointing to the network staffers who do respect normal journalistic conventions. But on Sunday, when one of those much-touted news staffers practiced exemplary journalism at the expense of the White House, the network promptly buried it.

Fox News host Chris Wallace’s much-touted grilling of White House press secretary Sarah Huckabee Sanders over the administration’s false talking point that thousands of terrorists are stopped at the southern border each year was big news everywhere but at his own network.

Wallace challenged Sanders during a combative interview on Fox News Sunday, pointing out that the administration’s claim is contradicted by State Department reports that found, as Wallace said, “no credible evidence of any terrorist coming across the border from Mexico.” Sanders responded, “We know that roughly nearly 4,000 known or suspected terrorists come into our country illegally, and we know that our most vulnerable point of entry is at our southern border,” Wallace debunked her claim, saying, “I studied up on this. Do you know where those 4,000 people come or where they’re captured? Airports.”

Wallace’s fact-check drew cheers on Twitter and was subsequently written up by, among others, CBSNews.com, The Hill, HuffPost, The Week, Splinter News, The New York Post, The Daily Beast, TownHall.com, Mediaite, Newsweek, ThinkProgress, and The Washington Post. Many pointed to the incongruity of a White House aide having her talking points shredded by a host from the network that has done so much to support President Donald Trump.

Even Fox’s direct competitors have been giving the exchange lots of airtime. MSNBC discussed the interview on Sunday’s AM Joy and Kasie DC and on the Monday editions of First Look, Morning Joe, and MSNBC Live. CNN discussed the interview on Sunday’s Reliable Sources and CNN Newsroom and Monday’s Early Start (during the 4 a.m. and 5 a.m. hours), New Day (during the 6 a.m., 7 a.m., and 8 a.m. hours), and CNN Newsroom. “All I want to say is, thank you, Chris Wallace,” CNN host Brian Stelter said during one such segment. 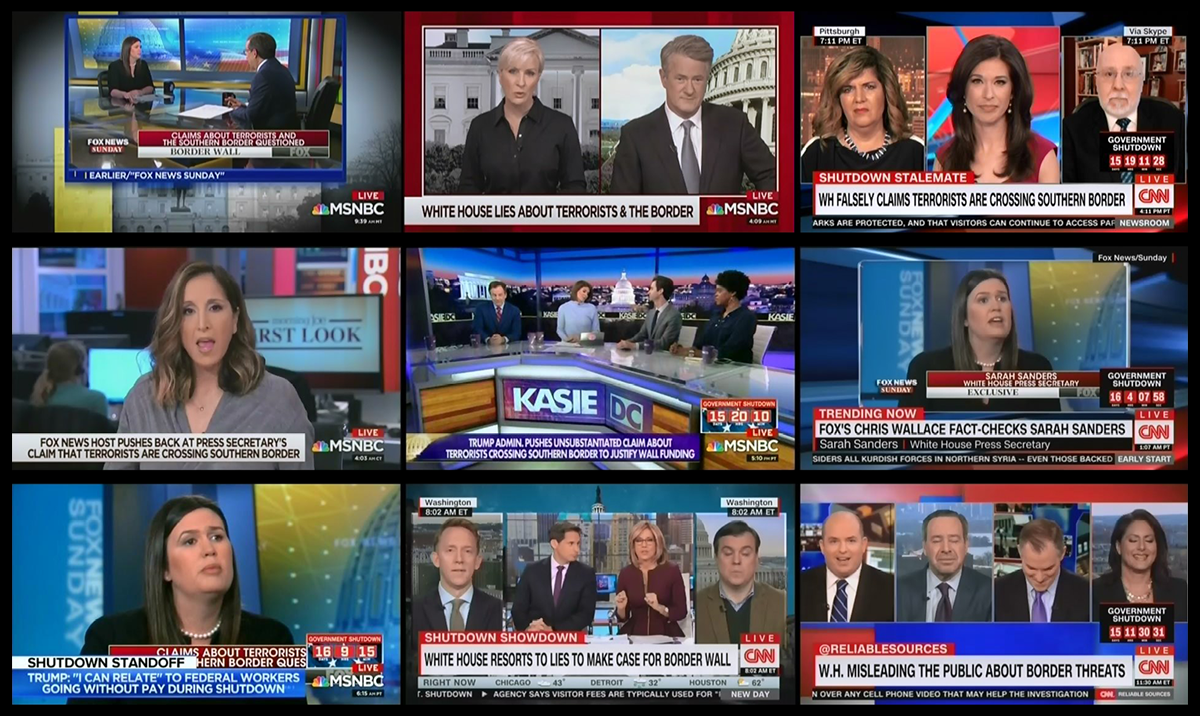 By contrast, as of 1 p.m. EST on Monday, outside of its regular re-airings of the program, Fox News had mentioned Wallace’s debunking of Sanders’ claim only once: on Fox & Friends First, during the 4 a.m. hour. Fox & Friends, the president’s favorite morning show, aired a clip from a different part of the interview, in which Sanders said that Trump is refusing to reopen the government without funding for a wall on the southern border to protect Americans from violent undocumented criminals.

Fox’s website has also been downplaying the exchange. On Sunday, it promoted the interview with the headline, “Sanders: Trump willing to ‘do what it takes,’ including bypassing Congress, to build border wall.” That FoxNews.com headline linked to a write-up that mentioned, in its eighth paragraph, that Wallace had responded to the Sanders talking point by “noting that the overwhelming majority of those individuals are captured at airports -- not at the border.”

By Monday morning, even that story had disappeared from the website’s front-page. But the website did continue promoting an interview with Sarah Huckabee Sanders: The one she gave to Fox & Friends on Friday morning, in which the hosts allowed her to push the same false talking point.

This case is instructive. Wallace’s interview is being widely and rightfully praised, and journalists across the political spectrum -- including at Fox’s competitors -- are treating his debunking of the administration’s talking point as a news story. A normal news network would take a curtain call and use its airwaves to highlight Wallace’s performance. But that would require Fox informing its audience about a false talking point that administration figures, Republican members of Congress, and the network’s own hosts have used on the channel. Put to that test, the network is effectively choosing to back the White House over its own staffer’s laudable work.

This is why people like Chris Wallace “can’t redeem Fox News,” as The Washington Post’s Erik Wemple put it. They may produce compelling journalism, but the network’s overall devotion to misleading its audience in support of the Trump administration will always win out.