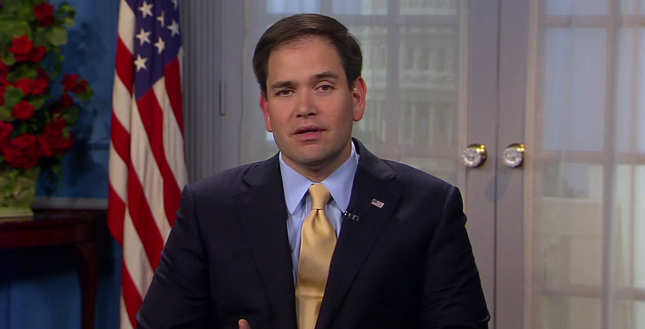 Local and national reporters should question Sen. Marco Rubio (R-FL) about the new draft of the Senate bill to repeal and replace the Affordable Care Act (ACA) and specifically about whether he supports a provision similar to the ACA’s “risk corridor” payments, which he previously led efforts to sabotage.

The Washington Post reported that the draft of the Senate bill, which would allow insurers to offer “bare-bones policies” as long as they also provide “more-comprehensive ones,” unveiled on July 13 “would establish a $70 billion fund to subsidize insurers providing both kinds of plans ‘for the associated costs of covering high-risk individuals,’ according to a GOP summary of the bill.” The fund appears to be similar to the ACA’s temporary risk corridor program, which, according to the Kaiser Family Foundation, “was intended to promote accurate premiums in the early years of the exchanges (2014 through 2016) by discouraging insurers from setting premiums high in response to uncertainty about who will enroll and what they will cost. The program worked by cushioning insurers participating in exchanges and marketplaces from extreme gains and losses.” George Washington University professor of health law Sara Rosenbaum said of a previous version of the Senate bill (which had a similar funding provision) that “There's 'no difference' between the insurer funds in Obamacare and the ones in the Senate Republican bill,” according to Bloomberg.

In 2013, Rubio committed what The New York Times called “quiet legislative sabotage” by limiting how much federal funding could go to these risk corridors. Right-wing media also adopted Rubio’s attack on the funds, with pundits like then-Fox host Bill O’Reilly claiming the payments “subsidize private insurance companies if they don't make profit from Obamacare.” Los Angeles Times columnist Michael Hiltzik noted that Rubio’s sabotage forced some small insurers out of business and created “higher premiums for [Rubio’s] constituents and insurance customers as a whole.”

Rubio's actions are part of a pattern of Republicans sabotaging the ACA. Reporters cannot settle for Rubio’s vague position on the bill, especially given the potential hypocrisy if he decides to support it. Journalists must question Rubio about his support for the bill, especially in regards to risk corridor funds.