Republicans are pushing forward with a repeal of the Affordable Care Act (ACA), and Florida is one of the states that stands to lose the most if health care reform is rolled back. Yet over the past two months, the top Florida newspapers -- the Miami Herald, the Sun Sentinel, the Tampa Bay Times, and the Orlando Sentinel -- have largely failed to convey the impact of repeal on many of the state’s vulnerable residents. While there were coverage flaws across the board, the Miami Herald outshone the other major newspapers.

Florida Sen. Marco Rubio joined 50 other Republicans on Wednesday to begin the process of dismantling the Affordable Care Act, a move that would have broad consequences for the Sunshine State.

Rubio voted for a budget resolution that paves the way for the repeal of President Obama’s signature health care law, with a vote coming as early as next week.

During his re-election bid, Rubio called it “a failed law that is hurting Floridians,” pointing to rising health care premiums and the struggle small business are having with the law’s “confusing rules and regulations.”

Few states would be as affected as Florida by a repeal of the Affordable Care Act.

More than 1.5 million Floridians enrolled last year in the health care exchange, the online marketplace set up by the law that allows consumers who don’t have access to coverage through their job or a government plan can sign up for insurance. In addition, 9 out of 10 state residents using the exchange qualify for some type of subsidy to offset the cost.

Regardless of its flaws, the health care law’s repeal without a suitable replacement would have devastating consequences, said Mike Ellis, CEO of Healthcare Network of Southwest Florida, which serves indigent patients.

“Very large numbers of people who couldn’t get insurance before will not be able to get insurance again,” he said. “This is a very large step backwards for the care of people in Florida." [USA Today, 1/4/17]

Center On Budget And Policy Priorities: “2.2 Million Florida Residents Would Lose Coverage In 2019 Under ACA Repeal.” A Center on Budget and Policy Priorities (CBPP) fact sheet cited analysis by the Urban Institute finding that “2.2 million fewer people in Florida would have health insurance in 2019 if the Affordable Care Act (ACA) is repealed.” The CBPP estimated that “nearly 529,400 more Florida residents have enrolled in Medicaid since 2013” and noted that those gains would be reversed by a repeal of the ACA’s Medicaid expansion. The fact sheet also noted the disproportionate impact of repeal on low-income communities and emphasized that “harmful effects would be felt immediately” even if the repeal delayed implementation because “repeal would destabilize the nongroup insurance market beginning in 2017.” From the December 2015 fact sheet (boldface original):

2.2 million fewer people in Florida would have health insurance in 2019 if the Affordable Care Act (ACA) is repealed, new Urban Institute estimates show. Republican policymakers plan to move quickly in January to repeal much of the health reform law without enacting a replacement.

Moderate-income working families in Florida would lose substantial financial assistance that is now available to help them pay their premiums and cost-sharing for insurance purchased in a marketplace. In 2016, Floridians who enrolled in marketplace coverage receive an average advance premium tax credit of $302, which covers 78% of the total monthly premium for comprehensive coverage.

In addition, nearly 529,400 more Florida residents have enrolled in Medicaid since 2013 – coverage gains that likely would be lost due to the elimination of the Medicaid expansion for low-income adults.

Harmful Effects Would Be Felt Immediately

Repeal would destabilize the nongroup insurance market beginning in 2017 as a combination of several factors — pending loss of subsidies, elimination of the requirement to buy insurance, and the requirement on insurers to sell to all purchasers — would cause prices to rise and the healthiest people to drop coverage. Nationwide, 4.3 million people would lose insurance right away, rising to 7.3 million by 2019. [Center on Budget and Policy Priorities, 12/7/16] 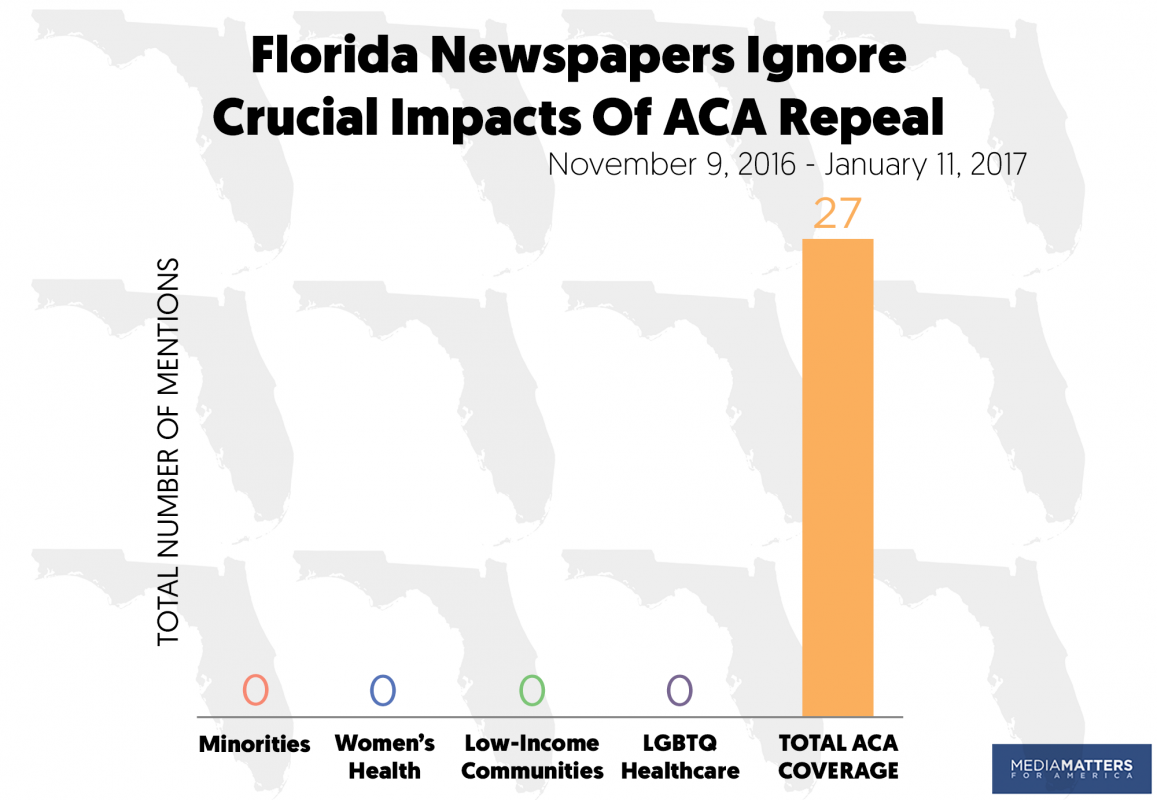 Papers Failed To Cover The Impact Of Repeal On Minority Communities, Despite The ACA’s Major Impact In Reducing Racial Health Disparities.

Florida Papers Had Zero Mentions Of The Impact On Minority Communities. Not a single article in the past two months from the top four Florida newspapers by circulation -- the Tampa Bay Times, the Orlando Sentinel, the Miami Herald, and the Sun Sentinel -- addressed the impact that the repeal of the ACA would have on minority communities.

The ACA Made Significant Strides In Reducing Racial Health Disparities. The ACA has decreased the gap in insurance rates between racial and ethnic minorities and non-Hispanic whites. Prior to the ACA’s implementation, minority communities faced financial barriers to accessing care in part because of, as Politico explained, pre-existing conditions such as “high rates of diabetes among Latinos or Hepatitis B among Asians.” When they fail to treat these conditions with a primary care physician, patients often get sicker, thereby requiring more costly treatment. [Politico, 1/19/11; Families USA, 4/22/14; Democratic Policy and Communications Committee Fact Sheet, accessed 1/9/16; The Atlantic, 4/9/14]

There Was No Coverage Of The Detrimental Consequences Of Repeal On Women’s Health Even Though The ACA Was Essential In Improving Access To Women’s Health Care.

Papers Ran No Articles Outlining The Impact Of Repeal On Women’s Health Care. The papers printed 27 total articles in the past two months about the Affordable Care Act, but none of them outlined the impact that its repeal could have on women’s health care, including but not limited to maternity care, gender rating, and the contraception mandate.

ACA Repeal Will Increase Costs And Reverse Gains In Women’s Health Care. Studies show the ACA significantly reduced out-of-pocket costs for women’s contraception while increasing coverage for reproductive-age women. Under the ACA, the uninsured rate among reproductive-age women has fallen by nearly one-third, according to a November 17 Guttmacher Institute study. According to the National Women’s Law Center, “Repeal of the ACA could return us to a world where insurance companies can indiscriminately charge women more than men for health coverage, deny women coverage of critical services, and impose high costs that effectively deter women from accessing care that is essential to their health and well-being. This not only harms women’s health, it also undermines the economic security of families and communities.” [Health Affairs, July 2015; Guttmacher Institute, 11/17/16; Kaiser Health News, 11/29/16; National Women’s Law Center, 12/12/16]

Papers Included Zero Mentions Of The Impact On The LGBTQ Community. Not a single article from the major four Florida newspapers mentioned the impact of a potential repeal of the ACA on the LGBTQ community.

The ACA Made Significant Steps Toward LGBTQ Equality That Repeal Would Reverse. Studies have shown that the ACA has reduced the number of uninsured LGBTQ people and decreased health disparities for the LGBTQ community. The law provided marketplace insurance subsidies to nearly 732,000 LGBTQ individuals nationally, and its expansion of Medicaid was particularly beneficial to LGBTQ youth, who are disproportionately likely to experience poverty and homelessness. The ACA helped the fight in achieving LGBTQ equality by dramatically improving access to health care for LGBTQ patients by banning discriminatory practices (like dropping individuals with pre-existing conditions) and prohibiting sex discrimination -- gains repeal would reverse. [Center for American Progress, 8/31/16, 5/30/13, 5/30/13; HealthInsurance.org, 6/26/15; The Huffington Post, 2/2/16; Kaiser Family Foundation, 11/11/16; Health Affairs, 6/6/16; Family Equality Council, 5/23/13, Washington Blade, 9/22/16]

Reporting Failed To Contextualize The Negative Implications Of Repeal And Proposed Changes To Medicaid On Low-Income Communities.

Newspapers Included No Mentions Of The Impact Of Repeal On Low-Income Communities, Despite The Potentially Devastating Impact Of Proposed GOP Changes To Medicaid. None of the 27 articles addressed the impact of ACA repeal on low-income communities. More problematically, there were four mentions of potential changes to Medicaid that didn’t contextualize the impact on the poor, even though Medicaid is a social program directly aimed at low-income communities.

Experts Show ACA Repeal And Proposed Medicaid Changes Will Gut Coverage. Full repeal of the Medicaid expansion could endanger 11 million Medicaid enrollees, according to 2015 data. In addition, reform plans, such as block grant proposals that anti-ACA activists have previously backed, would mean that millions of Americans would lose access to health insurance and that states would have decreased capability to expand the program or increase benefits in the future. [Urban Institute, 9/8/16; Center on Budget and Policy Priorities, 3/17/15; Kaiser Family Foundation, 12/6/16]

Despite Coverage Flaws, The Miami Herald Led The Group With Strong Overall Reporting

The Miami Herald Outshone Other Major Florida Newspapers In ACA Coverage. The Miami Herald surpassed the other major Florida newspapers in their coverage of the ACA and the upcoming repeal debate. It provided nearly double the coverage of other newspapers -- 11 articles in contrast to the five articles from the Sun Sentinel and Orlando Sentinel and the six articles from the Tampa Bay Times. It led the way in reporting on the impact of repeal on the uninsured, both nationally and in Florida. It was the only newspaper to write an article addressing the potential impact of repeal on state budgets -- a crucial topic for local newspapers.

Miami Herald Piece Highlighted Good Practices In ACA Reporting. A December 7 article from the Miami Herald provided a clear example of strong reporting on the potential impact of a repeal of the ACA. The piece explained the potential impact of ACA repeal in terms specific to Florida, citing local experts including Miriam Harmatz, an attorney with Florida Legal Services, to provide crucial context for readers. The article cited studies from think tanks like the Urban Institute and the Kaiser Family Foundation, clearly explaining how repeal will effect the uninsured rate, both nationally and in Florida, and crucially tackled the question of how repeal might impact the state budget. From the December 7 article:

A partial repeal of the Affordable Care Act without an adequate replacement plan could lead to nearly 59 million Americans without coverage by 2019 — resulting in a higher uninsured rate than before the law commonly known as Obamacare was adopted in 2010, according to a report released Wednesday by the nonpartisan Urban Institute.

Miriam Harmatz, an attorney with Florida Legal Services, a nonprofit legal aid group that advocates for increased coverage, said the Urban Institute report places the risks of an Obamacare repeal without replacement in stark terms — especially in Florida, where an estimated 1.5 million people have signed up for an ACA plan in 2016.

“It’s really powerful and indisputable data now that repealing the Affordable Care Act without having a replacement plan is going to create absolute chaos in the healthcare system in Florida,” she said.

Harmatz said the ACA’s financial assistance adds up to a significant amount of federal funds flowing into the Sunshine State — about $5.2 billion a year, according to a recent study from the nonprofit Kaiser Family Foundation, a health policy think tank.

“It would be a catastrophic cost shift to local government,” she added, noting that the state alone cannot make up a loss of billions in federal funds.

Whatever path Trump and congressional leaders take to repeal the health law, however, they will be hard pressed to maintain or increase the health insurance coverage gains achieved under Obamacare without facing some difficult choices, according to the Urban Institute study.

“To replace the ACA after reconciliation with new policies designed to increase insurance coverage,” the study authors wrote, “the federal government would have to raise new taxes, substantially cut spending, or increase the deficit.” [Miami Herald, 12/7/16]

Media Matters searched the dates November 9, 2016, to January 11, 2017, in Nexis for any mention of “Obamacare” or “Affordable Care Act” or “ACA” in the Tampa Bay Times, the Sun Sentinel, the Orlando Sentinel, and the Miami Herald. Articles that primarily focused on repeal of the Affordable Care Act were included for analysis. Mentions of Medicaid, Medicare, the potential impact of ACA repeal on Medicaid and Medicare, the potential impact of repeal on the uninsured (both nationally and in Florida), women, minorities, and low-income communities were tallied in their own categories.