Sen. Marco Rubio (R-FL) is scheduled to speak alongside anti-LGBT extremists at the “Rediscovering God in America Renewal Project” event in Orlando, FL, from August 11-12. So far, the top 10 Florida newspapers have largely given Rubio a pass on his scheduled appearance, with only one original report and one wire report about Rubio headlining the event. His appearance comes nearly two months after Rubio was criticized for politicizing the massacre at a LGBT nightclub in Orlando. Event speakers include a hate group leader who criticized memorials for victims of the Orlando massacre and a pseudo-historian who has wondered why the government doesn’t “regulate homosexuality” like trans fats. 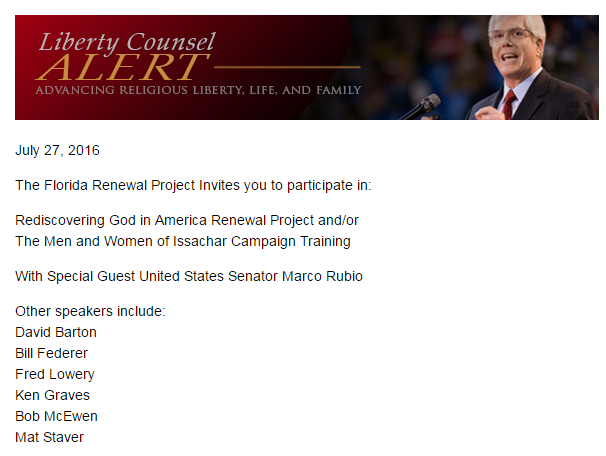 Rubio Will Speak Alongside Anti-LGBT Extremists And Hate Group Leaders

The Event’s Host Organization Is Run By An Anti-LGBT Extremist And Financed By An Anti-LGBT Hate Group. The “Florida Renewal Project” is an affiliate of the “American Renewal Project” (ARP). APR is funded largely by the American Family Association, an organization designated as an anti-LGBT hate group by the Southern Poverty Law Center. The ARP is run by David Lane, a well known anti-LGBT extremists who once predicted that “homosexuals praying” at President Obama’s 2013 inauguration would invoke the wrath of God in the form of “car bombs in Los Angeles, Washington D.C. and Des Moines, Iowa.” [Southern Poverty Law Center, accessed 8/4/16; Right Wing Watch, 1/29/15]

Pseudo Historian David Barton Believes God Is Blocking A Cure For HIV/AIDS To Punish Gay People. Right-wing pseudo historian and event speaker David Barton has a long history of anti-LGBT rhetoric, including claiming that God is preventing scientists from finding a cure for HIV/AIDS as a “consequence” of “homosexual behavior,” wondering why the federal government doesn’t “regulate homosexuality” like it does trans fats, and declaring that “homosexual indoctrination” is found in all public schools. In the 1990s, Barton spoke at events hosted by the racist and anti-Semitic Christian Identity movement, which asserts that Jews are “the synagogue of Satan” and that black people and other people of color are “subhuman.” [Right Wing Watch, 4/27/12; Right Wing Watch, 1/24/11; Media Matters; 10/7/10; Media Matters, 10/7/10]

Conspiracy Theorist Bill Federer Predicts The “Atheist Homosexual Gay Agenda Movement” Will Bring America “Into An Islamic Future.” A pseudo historian and conspiracy theorist, event speaker Bill Federer has speculated that President Obama attempted suicide to win re-election and that the U.S. military is intentionally “slaughtering” Christians. Federer alleges that the “atheist homosexual gay agenda movement” will move America “into an Islamic future.” Federer is also an anti-Muslim extremist who supports Muslim “no-go zones” in order to stop Muslims from “coming in like a billion hornets coming in and just stinging and vexing the people.” [Right Wing Watch, 5/14/15]

The Tampa Bay Times Reported A Statement From Rubio Denying That The Event Features Anti-LGBT Extremists. The Tampa Bay Times ran an blog featuring a statement from Rubio, in which he lambasted the “media and liberal activists” for labeling “a gathering a faith leaders as an anti-LGBT event.” From the August 4 edition of The Tampa Bay Times’ blog “The Buzz:”

Marco Rubio has come under fire from LGBT activists for an upcoming appearance at religious conference held next week in Orlando, two months after the massacre at the Pulse nightclub.

“The event 'Rediscovering God in America Renewal Project' is a who's who [of] some of the country’s most hateful anti-LGBT persons,” read a statement from the activist group Faith in America. “It's incredulous a Senator of [the] United States is willing to collude with individuals who are dedicated to oppressing LGBT people. The beliefs shared by this group actively harm LGBT people. This is not the America we want. God will not be found anywhere near that event.”

Rubio, in a statement to the Tampa Bay Times, said that characterization is false.

“The event I will be speaking at in Orlando is a gathering of local pastors and faith leaders. Leave it to the media and liberal activists to label a gathering of faith leaders as an anti-LGBT event. It is nothing of the sort. It is a celebration of faith,” he said.

"Because I believe that a strong America is not possible without strong families and strong values, for years now I have participated in events hosted by faith leaders to speak about the cultural and social issues before America, including the importance of parents and families, religious liberties and combatting poverty.

"I have always supported a traditional definition of marriage. But I recognize that a significant number of Americans hold a different view. Because marriage is regulated by the individual states, they have the right to petition their state legislature to change the law. And those of us who support traditional marriage also have a right to oppose those efforts.

“This debate should be conducted in a way that is respectful of the views and the dignity of those on both sides. That is the way I have expressed myself each time I have been asked to opine on this issue. And that is how I intend to continue to do so.” [The Tampa Bay Times, 8/4/16]

The Miami Herald Ran A Reprint Of A Newswire Article On Rubio’s Scheduled Speech. The Miami Herald published a reprint of McClatchyDC’s report about Rubio’s scheduled appearance at the event. The newswire noted that Rubio has “maintained anti-gay positions throughout his political career” and has been accused of “politicizing” the Orlando massacre by using it “as an excuse to reconsider running:”

Sen. Marco Rubio, R-Fla., is scheduled to speak at an event held by an anti-LGBT Christian group, after citing the terrorist attack on a gay nightclub in Orlando as a reason for reconsidering running for re-election.

Rubio, who had repeatedly insisted he would not seek re-election for his Senate seat after losing his Republican presidential primary bid, has maintained anti-gay positions throughout his political career. But after 49 people were killed by a gunman in Pulse nightclub, Rubio said the event “deeply impacted” him and led him to reconsider leaving politics.

“I think when it visits your home state, when it impacts a community you know well, it really gives you pause to think a little bit about your service to your country and where you can be most useful to your country,” Rubio said after the massacre.

Rubio has been accused of politicizing the tragedy and using it as an excuse to reconsider running, with the Human Rights Council calling it “staggering to think he would be using this moment for his own personal ambitions.”

Next week in Orlando, Rubio is scheduled to address an event hosted by the Florida Renewal Project, a chapter of the American Renewal Project, which works to promote an anti-LGBT political agenda. The event is being promoted by the Liberty Counsel, another anti-LGBT group, because its founder Mat Staver is speaking. Staver is the lawyer who represented Kim Davis, the Kentucky county clerk who refused to issue marriage licenses for gay couples. [McClatchyDC, 8/2/16; Miami Herald, 8/4/16]