Twice over the weekend, Townhall senior columnist and Rebel Media host Kurt Schlichter tweeted “14” at Twitter users with whom he appeared to be having political disagreements. “14” is a common white nationalist trope that refers to the slogan coined by white supremacist David Lane: “We must secure the existence of our people and a future for white children.” 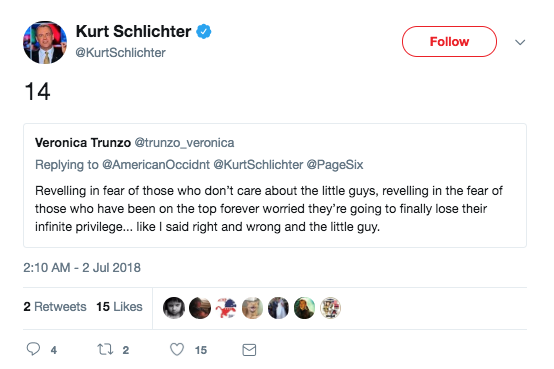 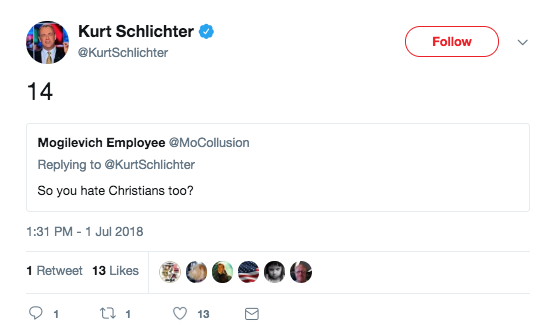 Schlichter is not the only right-wing media figure to use rhetoric linked to white nationalism in order to troll progressives. Milo Yiannopoulos, the far-right troll with Nazi sympathies struggling to stay relevant, recently sent a Jewish reporter $14.88, another code tied to white supremacy (the digital money transfer company Venmo kicked him off the platform, and PayPal did as well).  Similarly, a Department of Homeland Security February press release recently raised questions among journalists for echoing the trope.

By willingly associating with tropes so tightly tied to white nationalism, whether in jest or intentionally, Schlichter is revealing either that he has white nationalist sympathies, or he is comfortable with carrying water for white nationalists in order to “trigger the libs.” As New York magazine laid out, “ironic” trolling using white supremacist tropes has provided cover to genuine acts of hate and violence.