Fox’s Tomi Lahren embraced and amplified a sexist smear against Sen. Kamala Harris (D-CA) by accusing her of “using an extramarital affair to boost her political career.” The misogynistic smear has been gaining traction among anonymous message board users and right-wing influencers on Twitter.

Lahren devoted the January 29 edition of her show Final Thoughts on Fox Nation to alleging that all of Harris’ professional accomplishments by claiming they were due to a past relationship, and calling the Democrats who support the #MeToo movement hypocritical. Newt Gingrich had made a similar allusion just the day before on Fox & Friends.

As when Lahren spread a 4chan smear about Sen. Elizabeth Warren (D-MA), this misogynist smear about Harris was ripped from right-wing digital influencers and anonymous accounts in the fever swamps of the internet.

The sexist narrative started gaining traction in Reddit’s “r/The_Donald” subreddit (a forum devoted to President Donald Trump) closely following Harris’ announcement of her intention to run for president. Reacting to Harris’ announcement, users of the subreddit upvoted misogynistic memes and awful smears of a sexual nature (screenshots may not be safe for work).

In a January 26 San Francisco Chronicle column, former San Francisco Mayor Willie Brown addressed the press’s interest in his relationship with Harris. Brown stated that they had dated more than 20 years ago and that he had appointed her to political posts. Brown also wrote that Harris was the only one among “a host of other politicians” he had helped who “sent word” later that she would indict him if he “so much as jaywalked” while she was in office. Fox News spun Brown’s column in a sensationalistic article that amassed over 99,000 total interactions on Facebook; it then went viral on Reddit and inspired racist slur-laden posts on the anonymous message board 4chan. 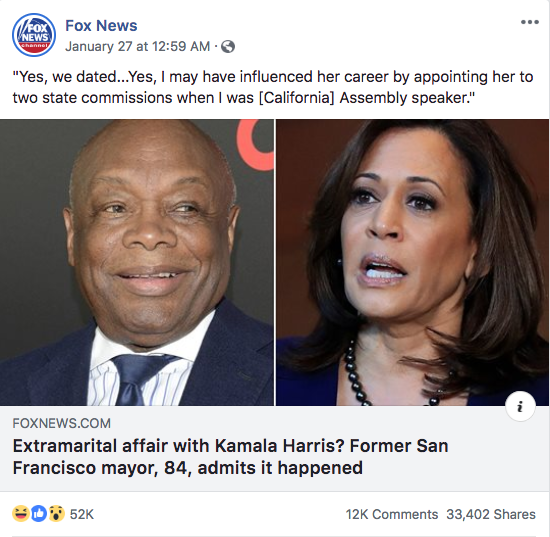 On the same day, popular right-wing Facebook pages also spread the narrative with click-bait headlines and misogynistic memes, and right-wing amplifiers picked up on the narrative.

The Gateway Pundit’s Jim Hoft accused Harris of launching “her political career in bedroom.” On his nationally syndicated radio show, Rush Limbaugh compared Harris to an adult entertainer. A host for conspiracy theory outlet Infowars went on a rant filled with demeaning accusations sexualizing Harris, saying she “basically sucked and ducked her way to the top.” (This show still livestreams on Facebook despite the platform’s supposed commitment to combating hateful speech from Infowars.) 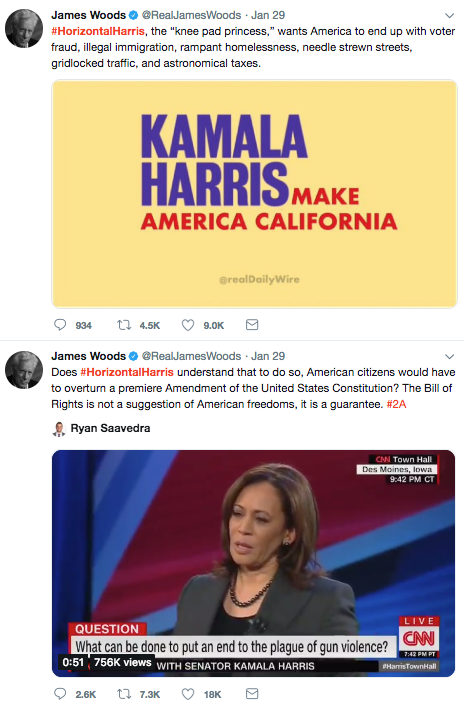 The barrage of crude memes attacking Harris is a clear reminder of the misogynistic double standard that applies to women who run for president.