Weeks before its release, the superhero movie Captain Marvel has already been targeted with negative reviews on the review aggregation site Rotten Tomatoes after users on 4chan called for a boycott and attacks on the woman-fronted and -directed film.

On February 12, Entertainment Tonight posted an article in which actor Brie Larson, who portrays the film’s superhero, said: “I had a meeting with Marvel and what we discussed is they wanted to make a big feminist movie.” The next day, The Hollywood Reporter posted a profile of Larson in which she discussed the movie’s significance for women -- in addition to it being the first Marvel movie led by a woman, it is also the first to be directed by a woman. Larson also said in an interview published on February 11 that the movie critic community “appeared to be overwhelmingly white male” and that she wanted the film’s press tour to be “more inclusive” for film critics of color and women.

Some in far-right circles have responded by lashing out online at Larson, calling her an “idiot” and saying that a “big feminist movie” “sounds awful.” Right-wing writer Courtney Kirchoff wrote articles calling Larson a “rude, sexist, racist bigot” and an “insufferable sexist bitch” on the website of BlazeTV host Steven Crowder, who is part of YouTube’s far-right community and who has hosted conspiracy theorist Alex Jones on his show and vice versa. On Reddit’s “r/MensRights” subreddit, a user promoted a YouTube video calling Larson an “NPC superhero” -- a reference to a meme about people who supposedly parrot left-wing views without thinking for themselves.

Users on on 4chan’s “/pol/” message board have been particularly angry, calling the movie “Captain SJW” -- short for “social justice warrior,” a far-right term criticizing those who support liberal causes such as feminism, racial justice, and LGBTQ rights. They also wrote that her “career needs to be destroyed for what she said about white men” and called for the movie to be boycotted. Some users also specifically urged others to “tank” the film’s ratings and “downvote” it on review sites like Rotten Tomatoes and IMDb, along with pushing users to start Twitter campaigns like #BoycottBrie and #BoycottMsMarvel:

On February 18, another 4chan message board, "/tv/," had a thread in which a user asked, "#BoycottCaptainMarvel raids when?"

Thousands of reviewers flocked to Rotten Tomatoes to tank the film’s pre-rating, which measures what percentage of people want to see it. The film's score dropped from 90 percent on February 11 to 59 percent as of the publication of this article.

On February 19, some 4chan posters suggested message board users had played a role: 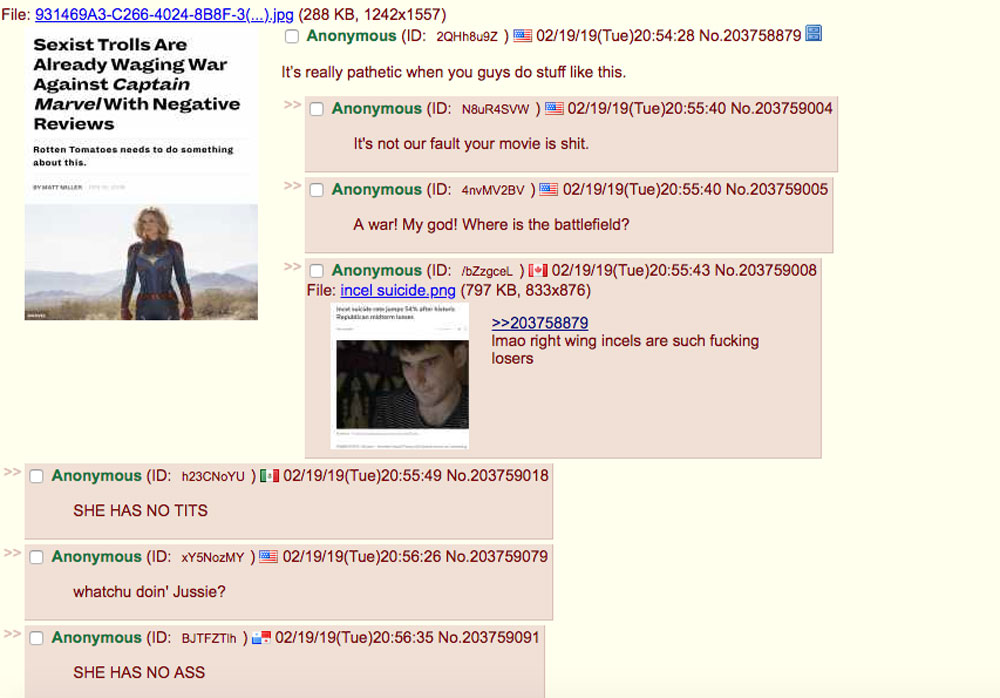 This would not be the first time far-right trolls tried to impact reviews on Rotten Tomatoes. In 2017, some on the far-right took credit for tanking the rating for Star Wars: The Last Jedi because they were angry about the film’s “feminist agenda.”