Far-right trolls are attacking the Green New Deal by sharing a fake version of the proposal that includes a suggestion to use recycled urine.

When your #GreenNewDeal legislation is so strong that the GOP has to resort to circulating false versions, but the real one nets 70 House cosponsors on Day 1 and all Dem presidential candidates sign on anyway https://t.co/BbHIn8cu0f

The Green New Deal is a comprehensive plan to fight climate change that has been championed by Rep. Alexandria Ocasio-Cortez (D-NY). She and Sen. Ed Markey (D-MA) introduced a nonbinding resolution on February 7 that outlines policies for the U.S. to achieve net-zero greenhouse gas emissions within 10 years, including transitioning from fossil fuels to clean energy and revamping transportation, agriculture, buildings, and other infrastructure.

As the Twitter account Unfakery pointed out, right-wing trolls are parodying the contents of the Green New Deal in an attempt to fool people into believing it actually includes a proposal to recycle urine.

The #GreenNewDeal is going around, but few people who aren't policy wonks actually read the details of documents like that. That makes it easy to parody, and also easy to fool people that the parodies are real.

So about that 'recycling urine'.... pic.twitter.com/Oz4pzbvCR9

Google’s search engine also picked up the disinformation: The hoax currently comes up as a suggestion when one types in “recycling urine.” (Media Matters searched for the term via an incognito browser.) 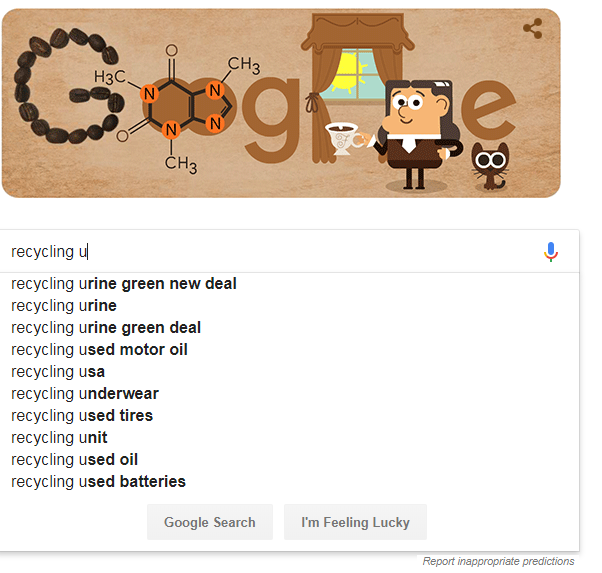 YouTube conspiracy theorist Mark Dice posted the hoax on both Twitter and Facebook and admitted that he made up the language, urging his followers to “spread it around,” make it “go viral,” and “don’t give away the joke.” 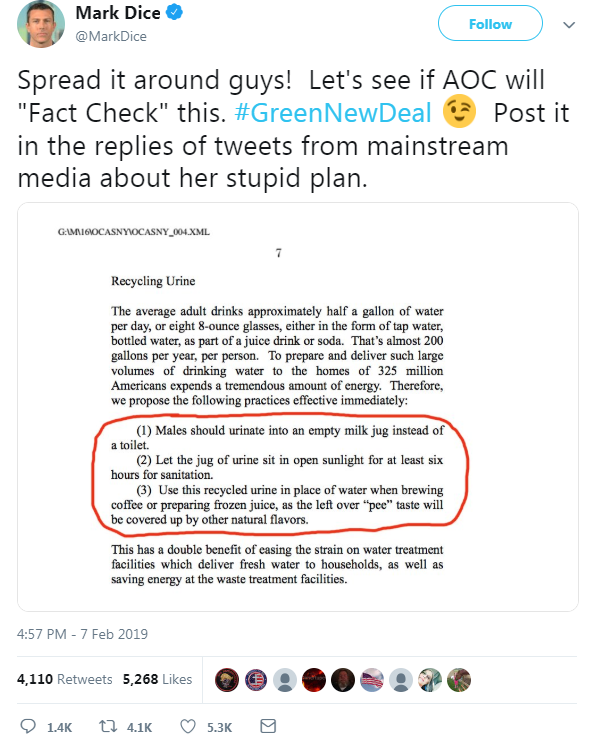 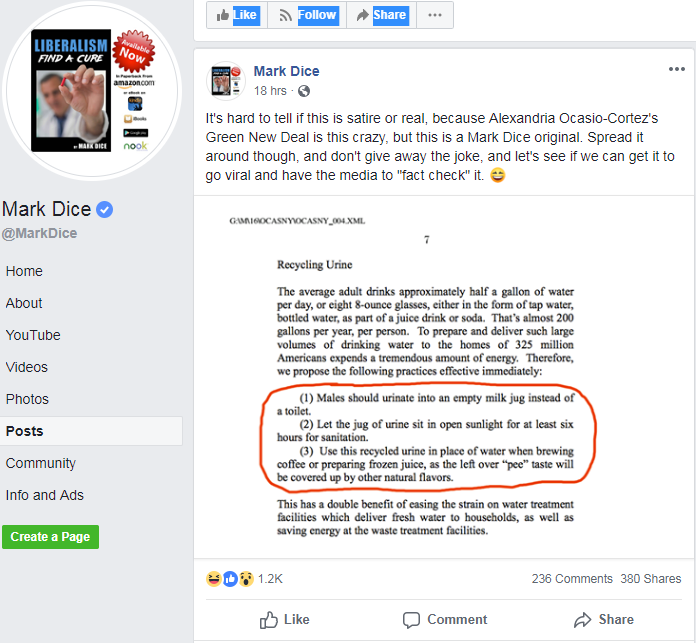 A YouTube user posted a video about the Green New Deal that mentioned Dice’s hoax as if it were a real point in the proposal. Dice wrote a comment under the video saying that he created the hoax as “satire,” again urging people to spread it: 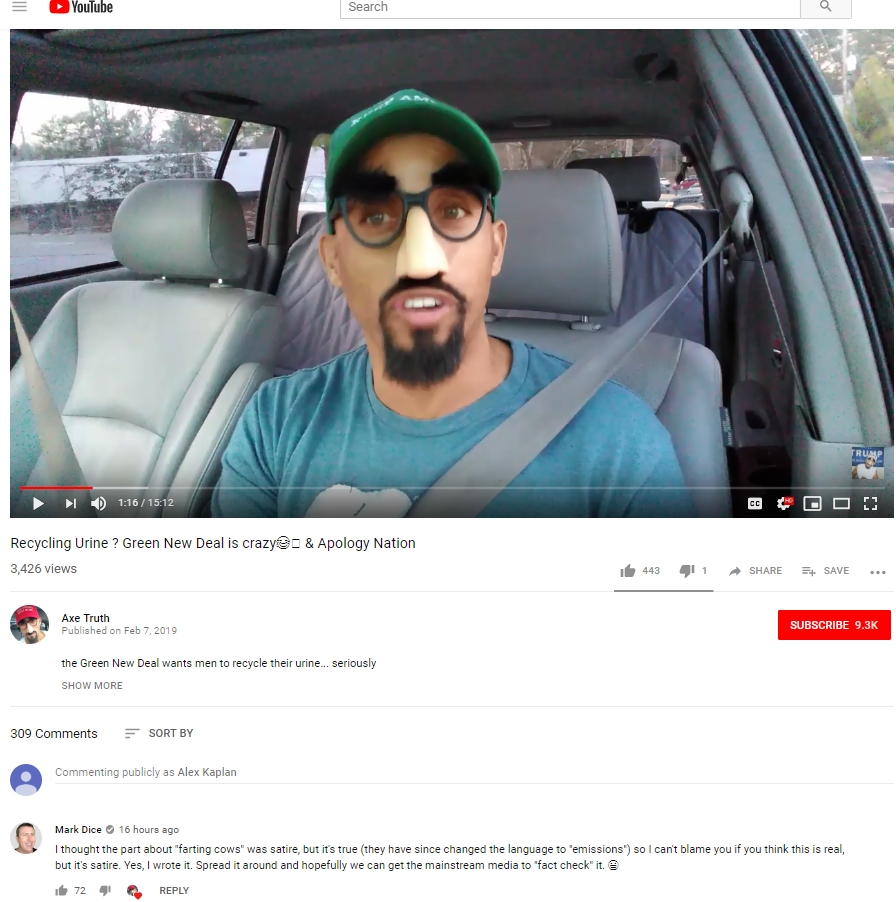 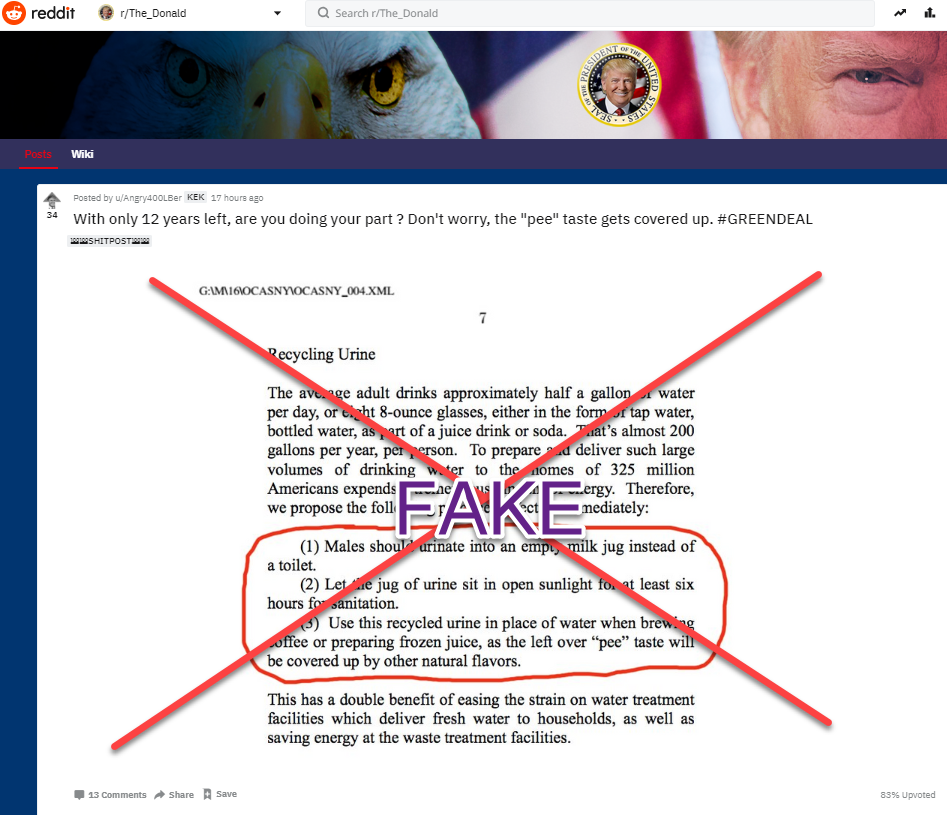 4chan’s “politically incorrect” message board known as “/pol/” (an earlier 4chan thread also pushed the hoax, but it has since been deleted): 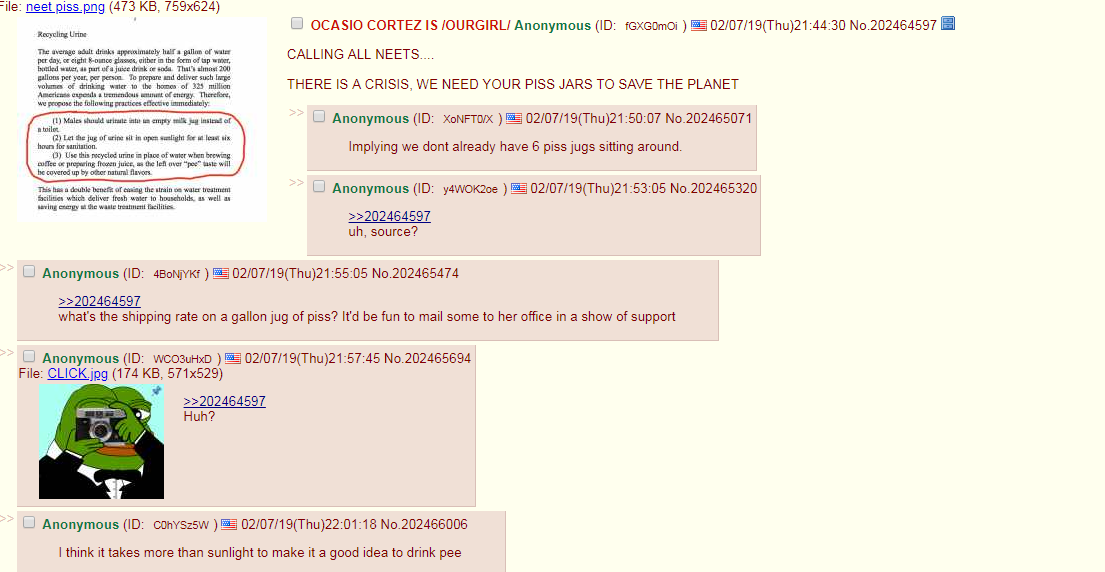 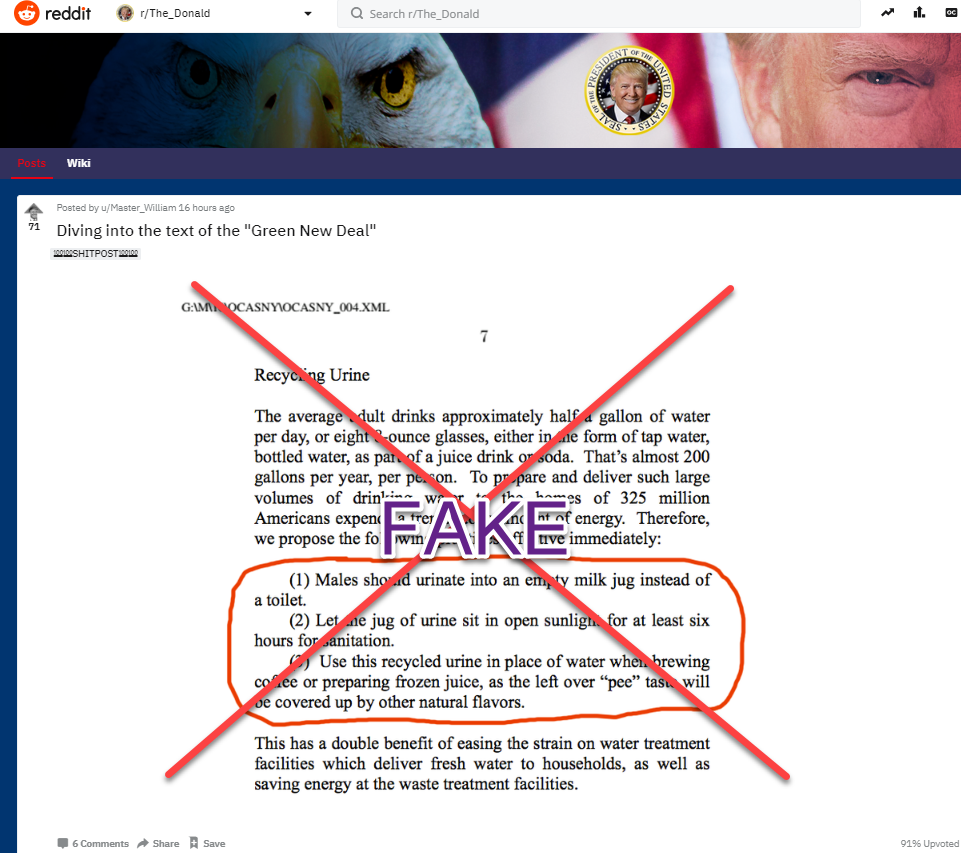 Far-right troll and One America News Network host Jack Posobiec (who later wrote that it was “obvious satire”): 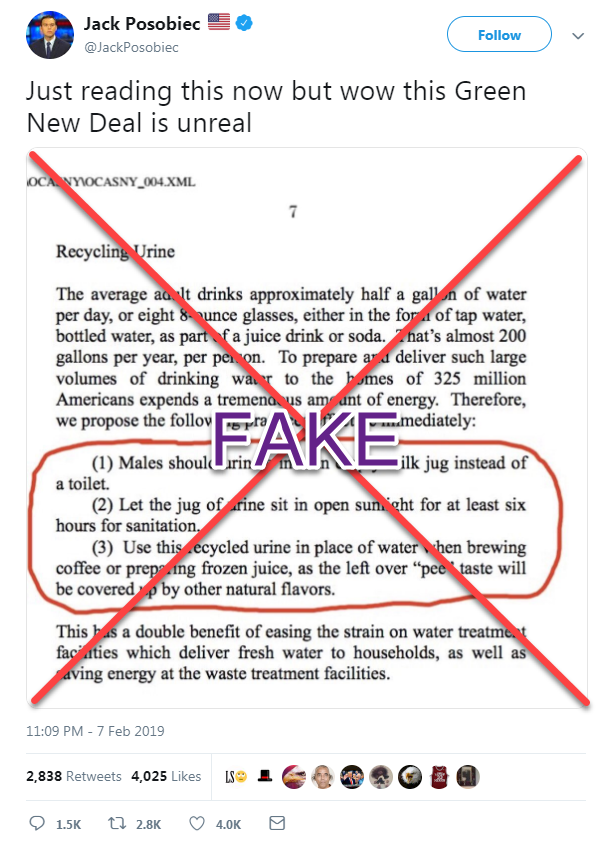 Even though Posobiec noted that it wasn’t real, other far-right trolls continued to spread the hoax, including on /pol/: 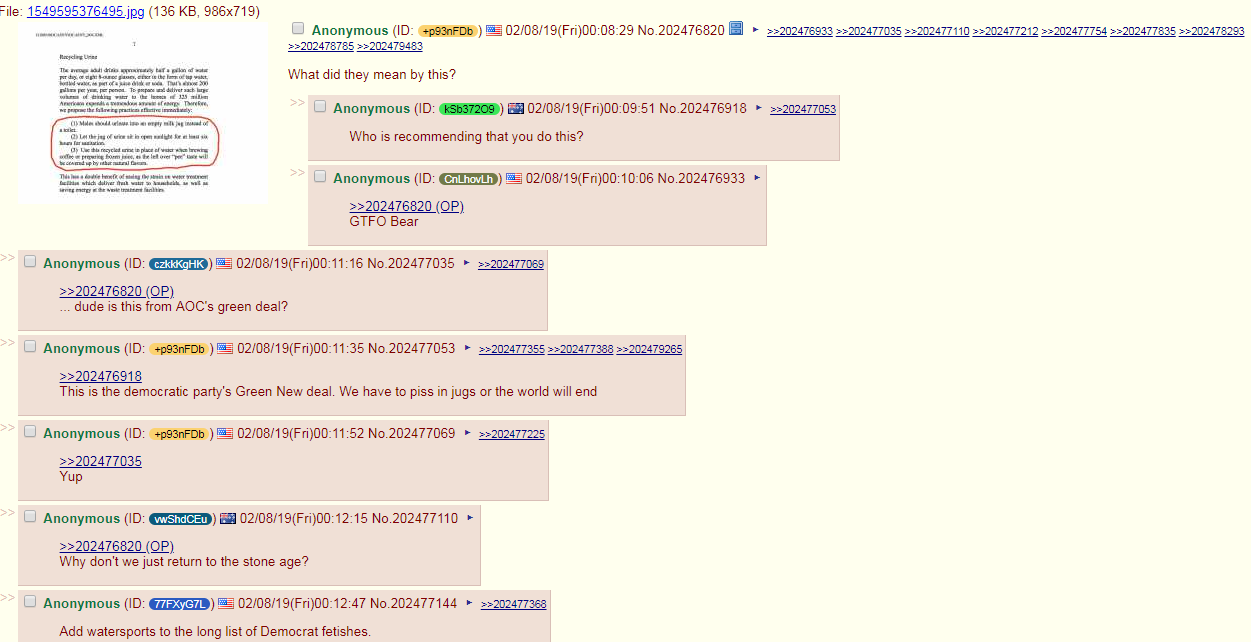