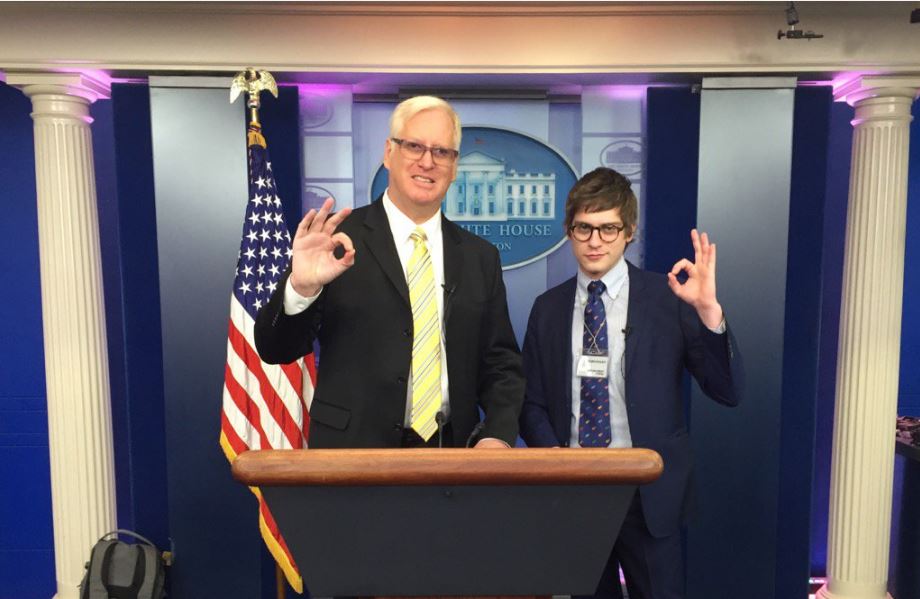 The Gateway Pundit’s Lucian Wintrich said he’s doing “performance art” as a White House correspondent in a Pittsburgh Post-Gazette profile, reinforcing that his role is less of a journalist and more of a sycophantic troll.

Wintrich, who was behind the “Twinks4Trump” photography exhibit, was hired by the far-right fringe (and often wrong) political blog The Gateway Pundit as its White House correspondent in February. Since then, Wintrich has adopted the Trump administration’s playbook for delegitimizing the media, including referring to anything critical reported about the administration as fake news and attacking media organizations like CNN. This coincided with the propaganda effort by the Trump administration to rely on pro-Trump shills to spread its message. Additionally, according to The Hollywood Reporter, Wintrich admitted that  “Half of what I do — well, on social media specifically — is f—ing with people.”

The Post-Gazette’s July 14 profile noted that Wintrich “has yet to ask a question in a White House briefing” and that he “doesn’t have formal journalistic training” and “wears his [pro-Trump] allegiance on his sleeve.” The Post-Gazette also quoted Media Matters president Angelo Carusone, who explained that Wintrich “is not really doing what a White House correspondent does, but he wasn’t supposed to. They’re looking for that moment when they get a viral response.”  From the Post-Gazette:

Mr. Wintrich, who previously worked for a New York advertising firm, has yet to ask a question in a White House briefing. But he’s already scored a different kind of journalistic coup: being confronted by another journalist.

When Mr. Wintrich gained White House credentials in February, The New York Times reported “concerns that the Trump administration, which has called the news media ‘the opposition party,’ is favoring outlets more sympathetic to its views.”

For his part, Mr. Wintrich told the Times “We will be doing a little trolling of the media,” referring to the online practice of goading opponents into lashing out and making fools of themselves.

He wears his allegiance on his sleeve, penning stories like “Trump Administration: One of the Most Transparent in US History, Open to Media,” which countered media grumbling with reminders of secretive practices by President Barack Obama.

Many posts rely on material reported elsewhere. And often, Mr. Wintrich himself is the story.

“I consider some of what I’m doing to be performance art,” he said, adding that “quote-unquote serious journalists are doing performance art themselves, but they don’t understand that.”

Angelo Carusone, president of liberal media-criticism outlet Media Matters for America, said Mr. Wintrich “is not really doing what a White House correspondent does, but he wasn’t supposed to. They’re looking for that moment when they get a viral response.”