Far-right grifter and “Pizzagate” conspiracy theorist Mike Cernovich is putting his star power behind Republican Kelli Ward by joining her on a bus tour before the Arizona primary on August 28. Ward, who is competing for the GOP nomination to represent Arizona in the U.S. Senate, described Cernovich in her announcement of the bus tour as “a social media personality and the author of several books examining political and social trends,” forgivingly glossing over Cernovich’s record of peddling disgusting conspiracy theories, shilling for the “alt-right,” dismissing date rape, and endorsing misogyny.

JUST NOW: “I don't really know what Mike Cernovich's views are. I know he's got an audience and I want to serve everyone” Ward said pic.twitter.com/ZRaKrYRPJq

Questioned about the decision, Ward hilariously claimed to not know what Cernovich’s views are. Ward, along with her husband, is an administrator of a Facebook group that traffics in some of the same conspiracy theories that Cernovich pushes. Ward has also been an ally of conspiracy theorist Alex Jones, and Cernovich has done frequent work with Jones’ Infowars in recent years.

Despite running with Cernovich’s crowd for years, Ward can try to get away with claiming to not know who he is perhaps because of his attempts to scrub a lot of his caustic record from his online portfolio. However, an abundance of deleted tweets, blog posts, and videos reveal him for the unhinged conspiracy theorist, rape denier, and “alt-right” shill that he became famous for being.

Cernovich has made journalists a target of many attacks

Cernovich has repeatedly pushed bigotry, and shilled for white supremacists and the “alt-right”

During the 2016 presidential election, some supporters of President Donald Trump baselessly claimed Democrats and powerful celebrities were tied to a pedophilia ring hiding in a Washington, D.C., pizzeria. As a consequence, a man went to the restaurant to “self-investigate” and opened fire inside.

Cernovich said, “Pizzagate is real. There are pedophiles at the highest level of media, Hollywood, and in government.”

Cernovich has attempted to scrub his wide-ranging “Pizzagate” record to obscure his role in propagating it. But since-deleted tweets show evidence of his responsibility. 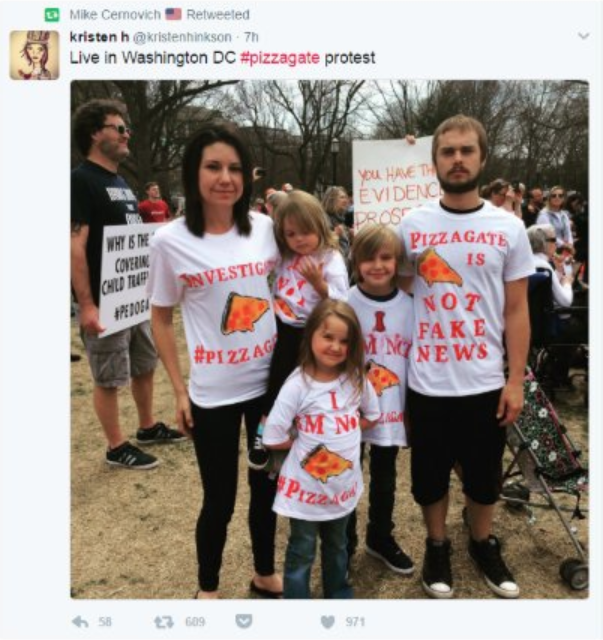 In one video, Cernovich said, “If you want to have the real power, they force you to rape children and they record it. And that does two things. One is you are now blackmailed forever. ... And then two is only someone depraved enough to rape a child is going to be allowed in the shadow government.”

In a video that can still be found on far-right misogynist Stefan Molyneux’s YouTube channel, Cernovich claimed John Podesta, chairman of the campaign of former presidential candidate Hillary Clinton, was involved in “spirit cooking” rituals, during which he claimed participants mixed “semen with breast milk” to drink.

Besides pushing the baseless claims on his website, Cernovich also suggested that then-candidate Donald Trump should have addressed the conspiracy theory during one of his rallies and accused the Clinton family of “100 percent” being connected to pedophile rings. On another occasion, he also suggested a visit to Haiti was evidence that the Clintons were trafficking children. 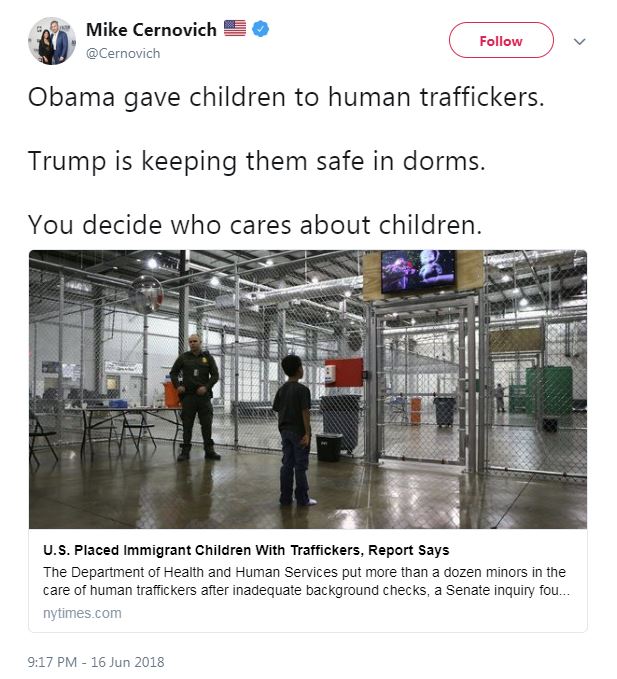 Cernovich also claimed to have heard that Obama’s children are not actually his children.

In another video, Cernovich said, “We have to purge the satanists from the FBI,” noting that he thought former Deputy FBI Director Andrew McCabe was a satanist, while he was unsure about former FBI special agent Peter Strzok.

As reported by The New Yorker, Cernovich was “among the first” to falsely claim that Hillary Clinton “had a grave neurological condition.”

Cernovich has also tried to smear all of his protesters and critics as pedophiles. And while he has avoided to outright endorse it, he is one of the far-right figures who amplified the QAnon conspiracy theory on their social media platforms.

Cernovich promoted a forged document that accused Senate Minority Leader Chuck Schumer (D-NY) of sexually harassing a former staffer, then quickly walked back the claim when the document was reported to police as a forgery.

He also promoted forged documents about Emanuel Macron before he was elected president of France.

Cernovich has also reportedly help spread pro-Assad propaganda. Cernovich declared that he was “not buying” that Syrian President Bashar al-Assad carried out chemical attacks against Syrians.

Democratic National Committee staffer Seth Rich was murdered in Washington, D.C., on July 10, 2016. On August 9, WikiLeaks founder Julian Assange brought up Rich unprompted on a Dutch TV program, implying (but refusing to confirm) that Rich was his source for the DNC emails Wikileaks made public before the presidential election. Cernovich promoted the interview while questioning point-blank if Rich was Assange’s source. 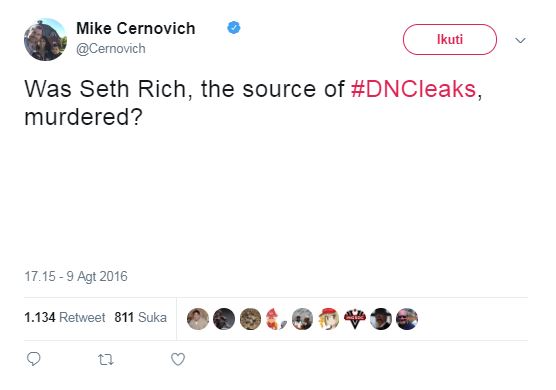 Cernovich falsely claimed that Beverly Young Nelson, who has reported that former Alabama Republican Senate candidate Roy Moore sexually assaulted her when she was 16, admitted that she forged Moore’s signature in her high school yearbook. Nelson actually said she added some notes next to the signature but that it was Moore’s signature. In fact, Cernovich cast doubt on all of the reports made against Moore.

In a since-deleted blog post, Cernovich claimed that “there was more than one shooter at Pulse in Orlando,” referring to the 2016 mass shotting at Pulse nightclub in Florida. Cernovich wrote, “As you follow the story, look for” certain “evidence.” He added, “If we don’t see all of this, then there was a second shooter.”

He also attempted to blame a mass shooting in New Mexico on anti-fascist protesters and made similar comments following a series of bombings in Austin, TX.

After a suicide bomber killed 22 people, including children, who were leaving an Ariana Grande concert in England, Cernovich attacked the pop star for liberal and “anti-American” statements that she made while reacting to a tray of donuts years prior.

Cernovich has made journalists a target of many attacks

Cernovich lashed out at a HuffPost journalist for reporting on a notorious anti-Muslim social media account. He also once planned a website to harass journalists and since then has set out to get some journalists fired by weaponizing fake outrage over past tweets taken out of context, unleashing his followers on harassment campaigns against targeted journalists on the way. He has said, “Most people in journalism are pedophiles.”

He also implied on Twitter that Jacobs may have had the assault coming.

Cernovich has repeatedly pushed bigotry, and shilled for white supremacists and the “alt-right”

Before rebranding away from the term when it became unpopular, Cernovich was among the main online proponents of the “alt-right,” rallying against diversity and going on the record to represent the movement’s views while declaring himself to be “alt-right friendly.” He also used to promote some of its figures, including “Baked Alaska” (who is white supremacist and serial-self owner Tim Gionet), Nazi sympathizer Milo Yiannopoulos (whose handle was @Nero before he got permanently banned from Twitter), and white supremacist Ricky Vaughn. 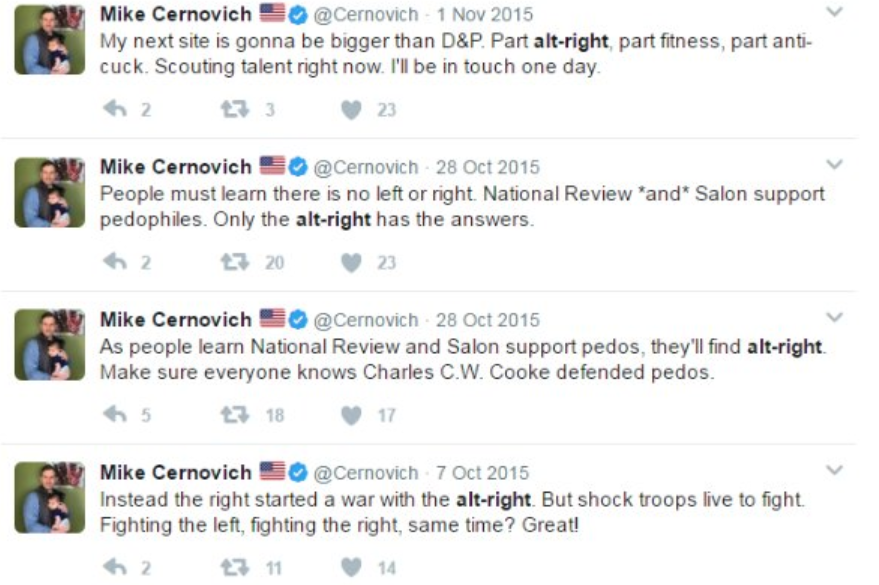 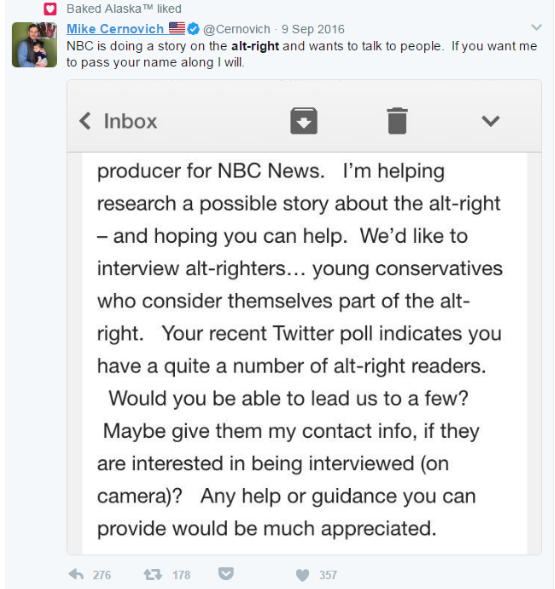 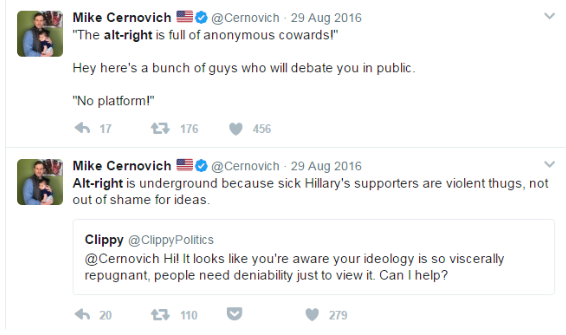 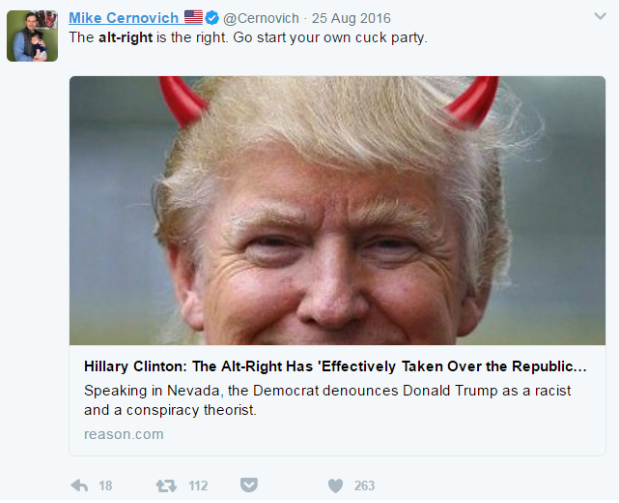 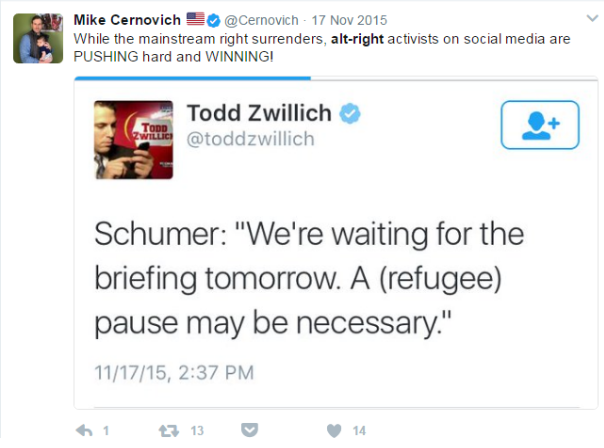 One of his tweets supportive of the “alt-right” even gave credence to the idea of “white genocide,” a common white supremacist trope. 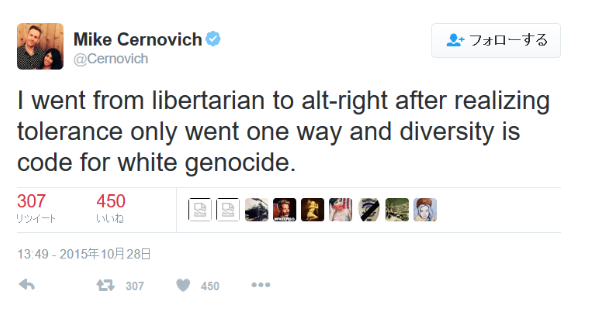 In one video, Cernovich trivially used the n-word:

He also complained about “thugs” attacking “me and my kind,” and he admitted that he was “happy” that a white supporter of Black Lives Matter was stabbed to death, saying he wouldn’t be stabbed because “I’m a … man.”

During one of his broadcasts to his followers, Cernovich repeatedly used a homophobic slur.

He has said, “Anywhere Muslims go, they’re blowing things up.” He also said that Muslims in America may want to “kill all women.” In another video, Cernovich warned transgender Americans that if refugees in Germany “find out about you, they’ll rape you and kill you.”

Cernovich called the Anti-Defamation League (ADL) “anti-America” and said that it is “extorting Jews.” He also replied “exactly” when Alex Jones said ADL has “always been the group that feeds on the Jews working with the Nazis.”

Cernovich has tried to hide his misogynistic musings, which the self-declared former “total hottie” used to post on his site Danger and Play. That site was a blog “about how to pick up women” and featured posts like “Misogyny Gets You Laid.”

One of his posts featured statements that minimized rape, including, “If you believe in rape culture, I understand a lot about you: you’re a gullible fool who believes feminists.” In a now-archived post, Cernovich denied the existence of date rape: 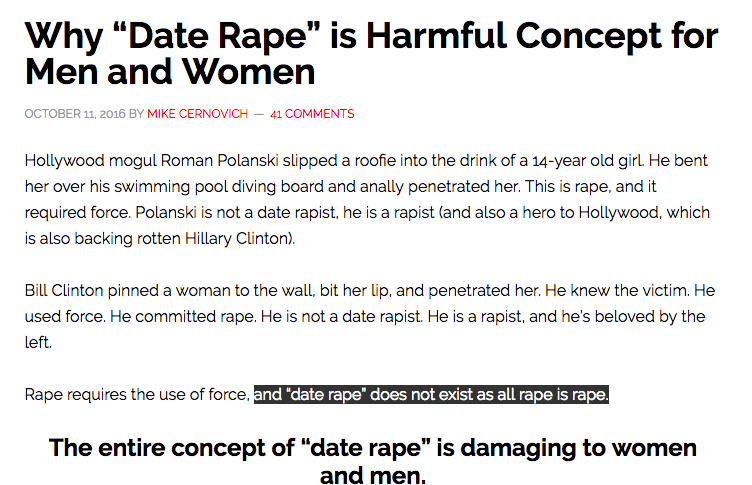 Additionally, in a post offering advice on “how to choke a woman” he claimed, “Women only want to have consensual sex with men they know could rape them,” and confessed to having “choked women unconscious” on occasion. He also advocated for choking women “when standing around,” saying to do it when she “acts up.” He’s on the record offering similar advice:

Cernovich once presented consent as a burden, saying, “If you as a man read a signal wrong, you’re a rapist.” In one video, Cernovich complained, “If your son, or you, … has sex with your girlfriend while she is sleeping … that’s technically rape.”

He has also said that “there is probably 10 men enslaved to every one woman enslaved.”

A 2016 Mediaite report rounded up a sample of Cernovich’s misogynistic tweets, which included “Have you guys ever tried ‘raping’ a girl without using force? Try it. It’s basically impossible. Date rape does not exist,” as well as “Not being a slut is the only proven way to avoid AIDS. If you love black women, slut shame them.” Mediaite additionally noted Cernovich had tweeted and deleted: “A whore will let her friend ruin your life with a false rape case. So why should I care when women are raped?”