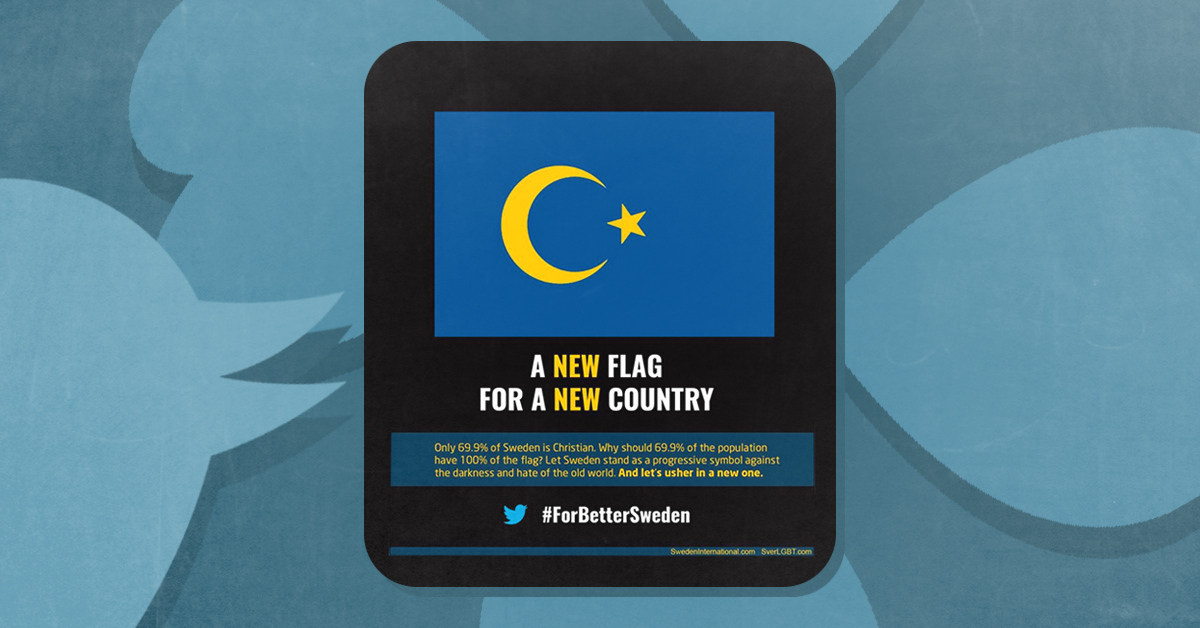 UPDATE: Avaaz has removed the petition from their website, telling BBC Trending: “This small petition is one of thousands started by individuals on the Avaaz platform. ...We've polled our members on it, and the overwhelming majority voted to take it down, so it's now been removed from our site.”

On Monday, November 13, a user on 4chan’s “politically incorrect” (/pol/) message board started a campaign to mock Swedish multiculturalism by ironically referencing a petition hosted by Avaaz, a U.S.-based global activism group that has not endorsed the online effort, to change the cross on the Swedish flag to an Islamic crescent. While the petitioner's motives are unclear, the 4chan post launched a corresponding campaign, which it called “Operation Swedistan,” encouraging users to “create significant traction” for the petition because it would “create the opportunity” to persuade an international audience that multiculturalism is a problem in Sweden, which the post called “the most Cucked nation on earth.” The campaign was a stunt, but it had a real, clear strategy: divide the left, outrage the right, and continue the drumbeat of xenophobic content targeting Swedish society. 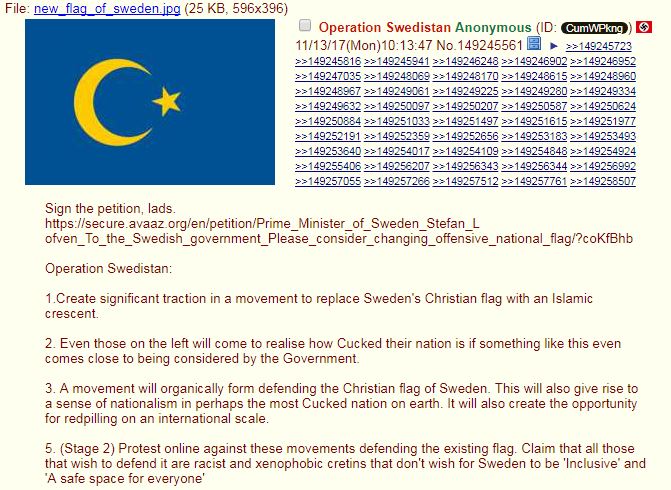 The campaign continued on Tuesday, when a poster on the message board gave additional instructions for users to spread the stunt on Twitter by showing their support for the petition and using the hashtag “#ForBetterSweden.” The objective, according to the message on the thread, was for “a movement [to] organically form defending the Christian flag of Sweden.” 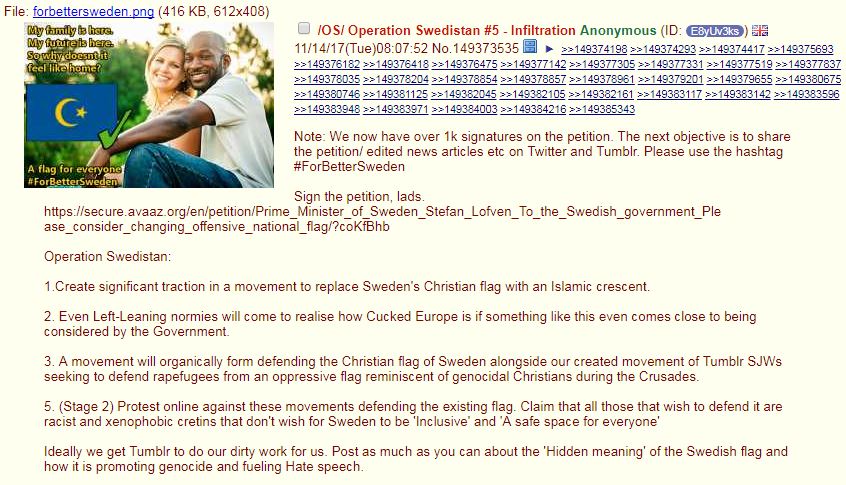 Twitter users dutifully obliged, tweeting the hashtag alongside memes created to give the movement an appearance of legitimacy. 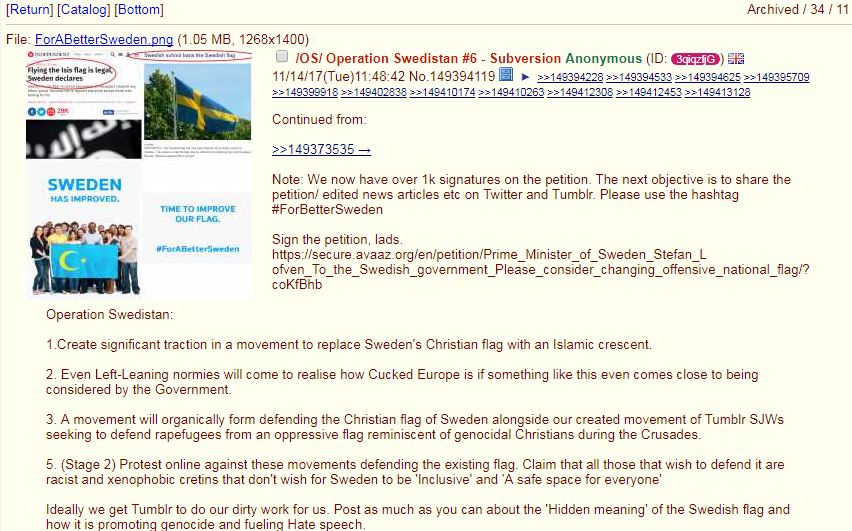 By Tuesday afternoon, the campaign had reached prominent conspiracy theory website Infowars and pro-Trump Reddit forum “/r/The_Donald.” Infowars author Kit Daniels acknowledged the petition might be fake, writing, “Some have alleged the campaign is a troll job by 4Chan, but Sweden is so cucked that the country might actually go along with it anyway.” Daniels basically admitted what we already know: The truth is of little importance. The dissemination of outrage is all that matters.

The petition gained over 3,700 signatures in a little over three days. Twitter trolls promoted it and some, again taking cues from 4chan, even uploaded images of fake articles presented to look like they had been published by BuzzFeed and Slate, left-leaning outlets, in support of the campaign. 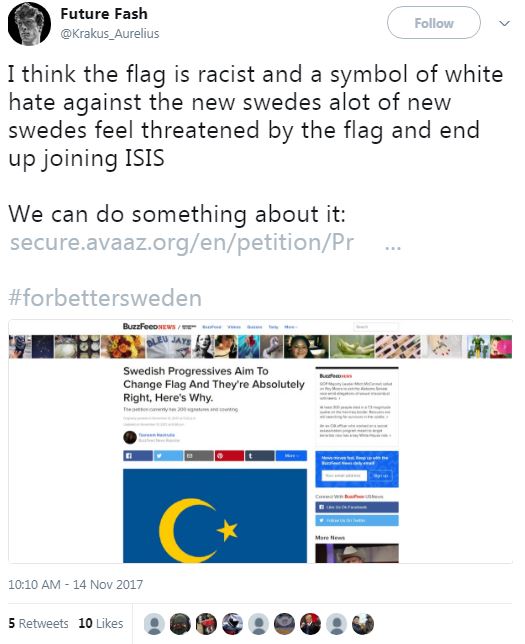 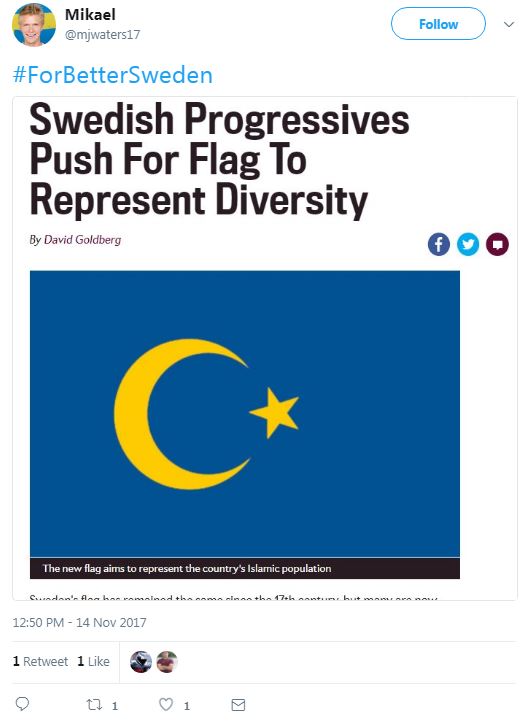 On Wednesday, the campaign became even more complex when a new 4chan thread claimed that at least two foreign news outlets had picked up the story. The poster put up an image of an article from a Swedish outlet that said that 4chan users were behind a fake petition to change Sweden's flag. The thread also provided further instructions: “Any press claiming they have exposed the 'Alt Right Hoax' should be informed that 'the alt-right hijacked the movement to give it less credibility' and that the petition/ majority of the movement is real.” The comment was a clear attempt to abdicate responsibility for the campaign, sow confusion, and promote skepticism of mainstream media: right out of the pro-Trump media playbook. 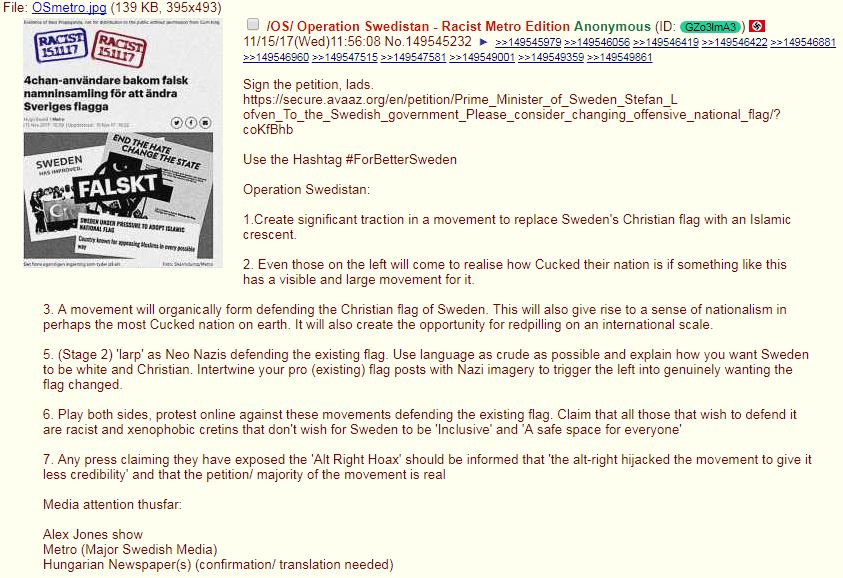 The #ForBetterSweden campaign has not been promoted by prominent pro-Trump trolls and far-right websites (other than Infowars), but that could change. Moreover, while this particular xenophobic 4chan campaign is a stunt orchestrated primarily to elicit reactions, it’s worth noting that 4chan has previously launched sincere, anti-immigrant campaigns designed to harm real people. In January, users on the “/pol/” message board encouraged others to trick Twitter users who are undocumented immigrants in the U.S. into publicly outing themselves so they could be reported to the federal government for deportation.

The 4chan message board is a notorious outrage machine on the front lines of the online culture wars. Users create politically relevant, emotionally salient troll campaigns with the intention of dividing progressive communities and distracting from real social issues. In this case, the issue is a real, growing anti-Muslim backlash to recent upticks of violence in Sweden, including an increase in hate crimes against Sweden’s Muslims and even those perceived to be Muslims.

Sweden is a popular target of pro-Trump media, fake news websites, and even Fox News, and the country’s historic embrace of multiculturalism has been a source of meme-based bigoted mockery since at least 2012. Operation Swedistan is just one example of the ways various internet trolls and xenophobic ideologues converge to achieve their goal: in this case, by attacking Swedish progressives’ appreciation of diversity in an effort to promote white European ethnocentrism. As the American alt-right movement attempts to expand its reach into Europe, particularly in Sweden, a country with a small but well-connected and decades-old nativist movement, these campaigns, however disingenuous, become all the more dangerous.

This post has been updated to include a statement from Avaaz on the petition and to clarify that the Swedish article calling the 4chan campaign fake was, in fact, published by the outlet.