Oath Keepers founder Stewart Rhodes and members of his far-right armed militia were spotted in the front row at President Donald Trump’s February 11 rally in El Paso, TX. Rhodes has advocated for training armed militias to do Trump’s bidding, embraced white supremacist conspiracy theories, endorsed using “lethal force” against left-wing protesters, and called on armed Oath Keepers to stand guard outside of schools and to spot unauthorized crossings at the U.S. southern border. 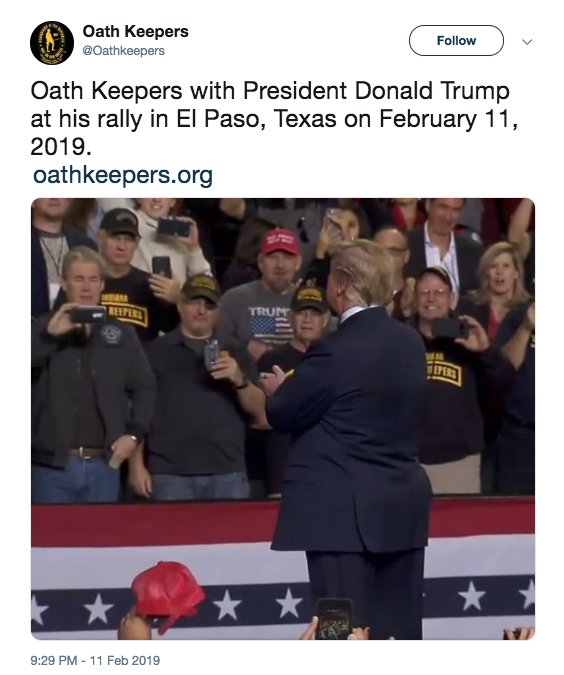 Rhodes founded Oath Keepers “in the direct aftermath of the election of the nation’s first black president,” Barack Obama, in reaction to the baseless claim that the federal government was hellbent on destroying liberties protected by the Constitution. The militia holds radical anti-government beliefs and is made up of “current and formerly serving military, police, and first responders” claiming to uphold the oath they made to “support and defend the Constitution.”

In reality, the group and its founder openly espouse radical beliefs. Some of these include calling transgender rights “nuts,” dismissing the racist use of blackface as “nonsense,” and claiming Rep. Alexandra Ocasio-Cortez (D-NY) is using identity politics focused on “anyone not white” to “weaponize them against their own nation.” In the Obama years, the group promoted conspiracy theories such as “mass, forced internment into concentration camps” and claimed that they were operation to “prevent dictatorship” in the United States. In 2015, Rhodes reportedly said that Sen. John McCain “should be hung by the neck until dead”; Rhodes also was one of the far-right figures pushing the Jade Helm conspiracy theory. Rhodes also reportedly claimed that the Obama administration was using Ferguson riots and the Ebola virus to “spark a race war.”

Rhodes has repeatedly pushed baseless claims of massive voter fraud by undocumented immigrants and directed his armed militia to combat it. In the days leading up to the 2016 presidential election, he announced “Operation Sabot 2016,” and asked fellow Oath Keepers to “go out into public on election day, dressed to blend in with the public … with video, still camera, and notepad in hand, to look for and document suspected criminal vote fraud or intimidation activities.” While he asked that they not bring guns, the Oath Keepers are closely associated with open carry protests, including the open carrying of firearms during protests against police brutality in Ferguson, MO, in which armed members looked down from rooftops. 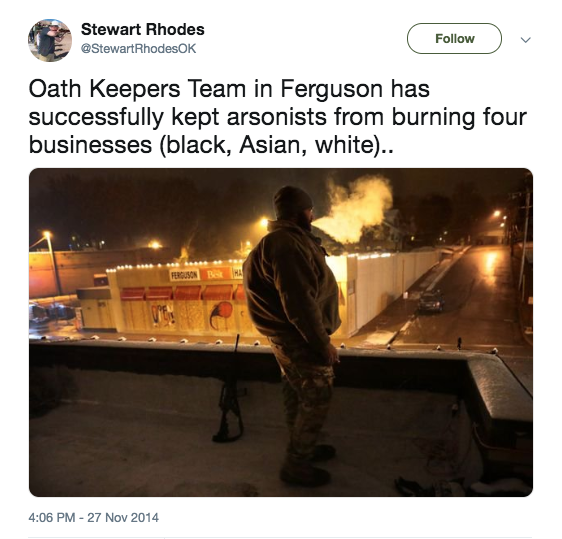 After the February 2018 mass shooting at Marjory Stoneman Douglas High School in Parkland, FL, Rhodes called on Oath Keepers to “post up armed outside your local school” and some members obliged.

On December 5, Rhodes went on Alex Jones’ Infowars outlet to push the white supremacist talking point that a caravan of immigrants at the U.S.-Mexico border was evidence of “globalists” (a term with anti-Semitic connotations) executing what he described as “the latest tactic or assault in an ongoing war on the West to flood us with Third World people and then overwhelm us and kill our countries.” He called for the Justice Department to indict “all these NGOs that are assisting these illegal aliens coming into the United States.” A similar white supremacist conspiracy theory that migrant caravans are the result of a Jewish plot to replace white people was embraced by the shooter who went into a synagogue in Pittsburgh, PA, and killed 11 Jewish people in October.

Two days after Infowars posted Rhodes’ appearance, his group issued a “call to action” on Twitter, asking members to head to the southern border “to conduct surveillance and to spot and report any suspected illegal infiltration of the U.S.”

Rhodes has also talked about forming an armed militia to do whatever Trump wants. During one of his frequent guest appearances on Infowars, Rhodes announced the launch of “a new program called Spartan training groups.” Rhodes said that the program is for “the average American” to learn combat skills to be available if “called out by the president of the United States to serve as a militia of the United States to secure the schools, protect our borders, or whatever else he asks them to do.”

He also talked about the group’s involvement in providing security for far-right rallies and advocated for armed militias to recruit retired police for their nationwide concealed carry privileges as a “final line of lethal force” against anti-fascist protesters in any jurisdiction. Rhodes alluded to working alongside other violent extremist groups such as Patriot Prayer -- the group responsible for a cache of firearms found on a Portland, OR, rooftop in preparation for a protest last summer -- and the self-identified gang Proud Boys.

In another appearance on Infowars, Rhodes hinted at the Oath Keepers murdering anti-Trump protesters, saying that left-wing protesters were coming close to “forcing” militias like his to have “no choice” but to “kill them.”