As a fire consumed the Notre Dame Cathedral in Paris, far-right figures took to social media platforms and message boards to spread misinformation and baseless claims, such as speculating that the fire was connected to terrorism or suggesting that Muslims and ISIS were linked to the tragedy.

As reported by The New York Times, a spokesperson for the cathedral said the fire’s cause is not yet known, and prosecutors have since ruled out arson. And yet far-right narratives and speculation have already influenced automated suggestions on social media platforms like YouTube, which scrambled as the news was breaking to contain auto-generated text linking content about the cathedral fire to the 9/11 terrorist attacks.

Here are some examples of the far-right using the Notre Dame fire to spread bigotry, misinformation, conspiracy theories, and other baseless claims on tech platforms and elsewhere:

A popular conspiracy theorist known as Partisangirl speculated that French President Emmanuel Macron had “probably set fire to Notre Dame” as a way to deal with recent protests:

The word “probably” is the part that's interesting to me and is such a great example of what social media is doing to people's brains. pic.twitter.com/rEjRkczCKn

Infowars’ Paul Joseph Watson spread a claim based on a since-deleted tweet that cited a Notre Dame Cathedral worker saying “the blaze was deliberately set": 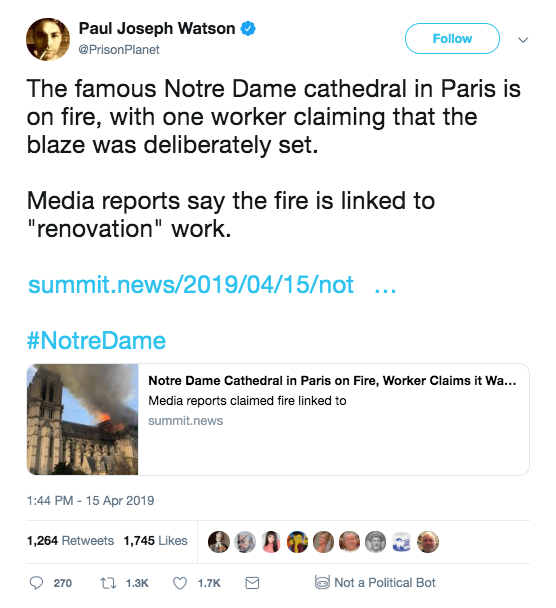 White nationalist Faith Goldy appeared to suggest that the fire was possible retaliation for the mosque shootings in New Zealand last month in which 50 Muslims were murdered: 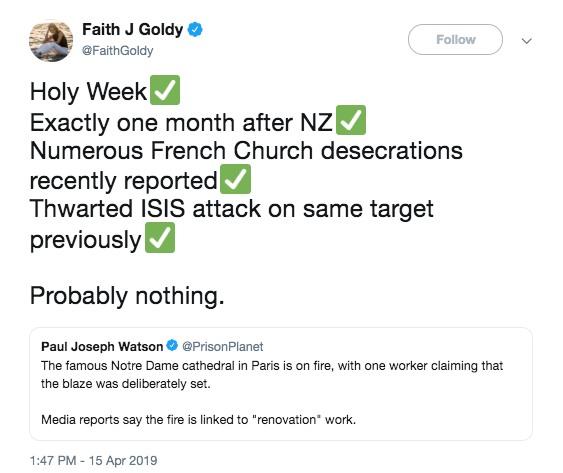 Jim Hoft’s The Gateway Pundit published a “flashback” to ISIS claims that the 2015 terrorist attack in a Paris concert house was “just the beginning”:

A thread in Reddit’s pro-Trump forum “r/The_Donald” suggested Islam was to blame for the tragedy: 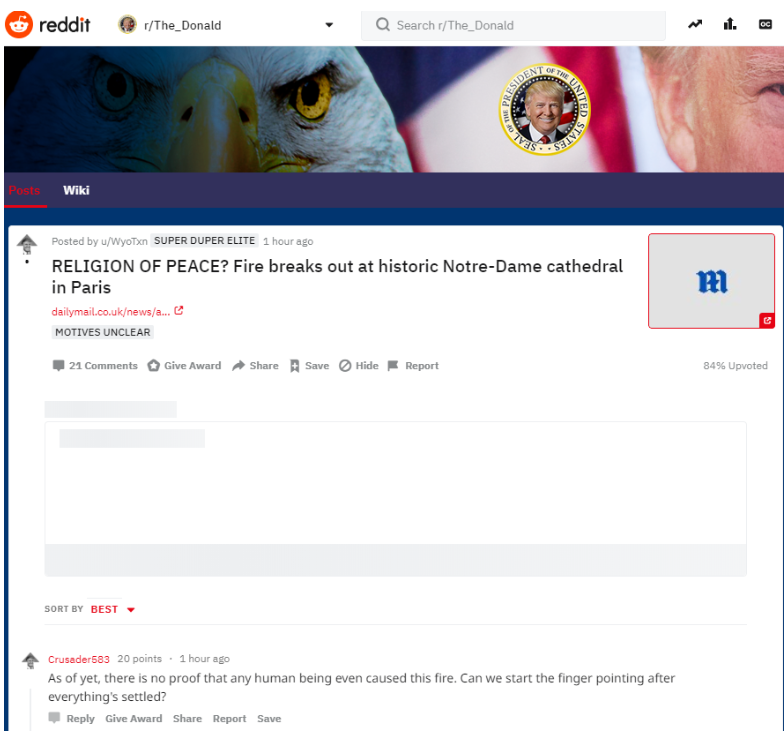 Anti-Muslim extremist group leader Frank Gaffney baselessly suggested that the fire was part of a “Sharia-supremacist assault on Christianity.”

Anti-Muslim blog Jihad Watch originally wrongly implied a Muslim woman arrested for an attempted car bombing was related to the attack (it later noted it was a separate story); the baseless suggestion was picked up by The Gateway Pundit and anti-Muslim conspiracy theorist Laura Loomer.

9. This story from Jihad Watch was published right as news about Notre Dame was breaking.

It's picking up speed on Facebook and has a “this is not about Notre Dame” update that you'll only see if you click into it. pic.twitter.com/12xEOGvUf7 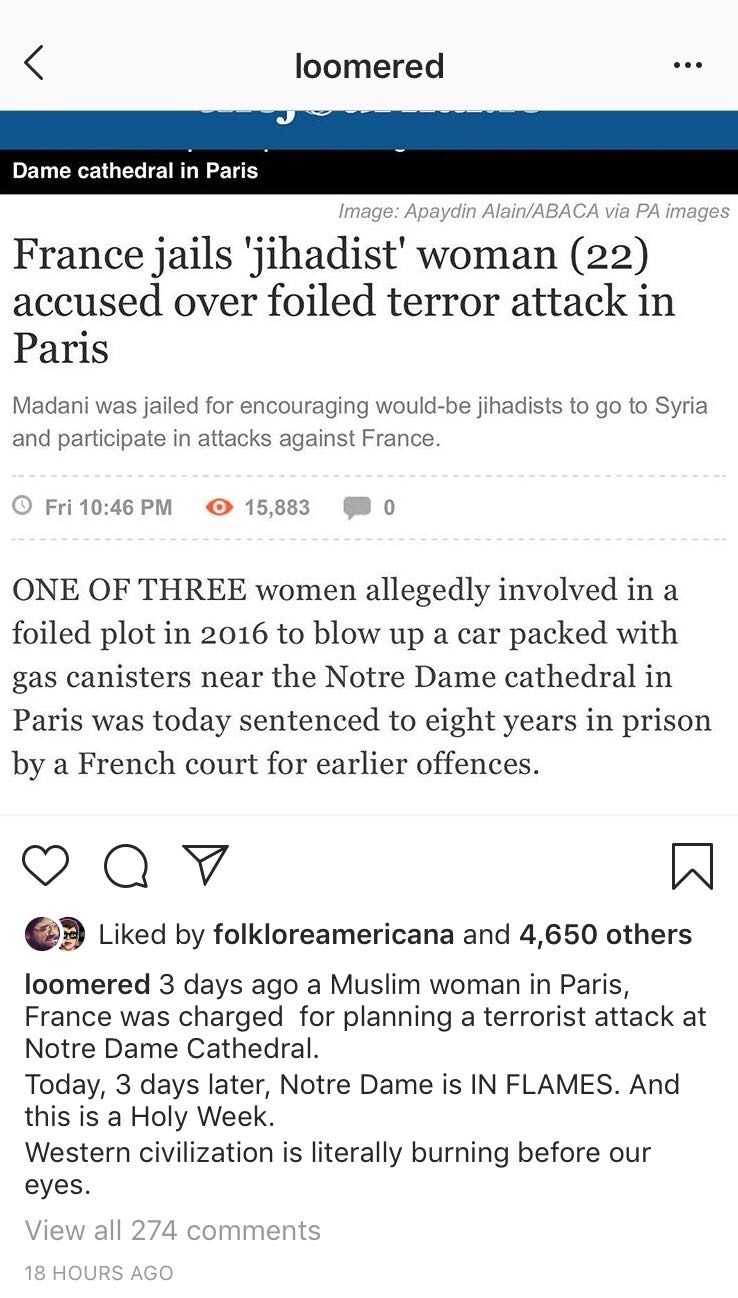 Fox guest host Mark Steyn mentioned terrorist attacks by Muslims while discussing the fire and suggested it showed the decline of Christianity in Europe.

Loomer, fellow anti-Muslim bigot Pamela Geller, and others on social media suggested a connection between the fire and two men smiling near it, with Geller writing, “Muslims laugh as blaze destroys Notre Dame.” 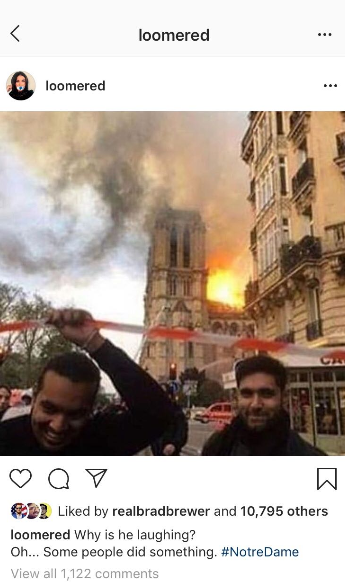 Far-right conspiracy theorists Mike Cernovich, Stefan Molyneux, and James Woods claimed the fire meant “the West has fallen,” that it showed the “general decline in IQ throughout the West,” or that it showed “the great and glorious history of Christianity … being eradicated from the face of the ‘new’ Europe.” 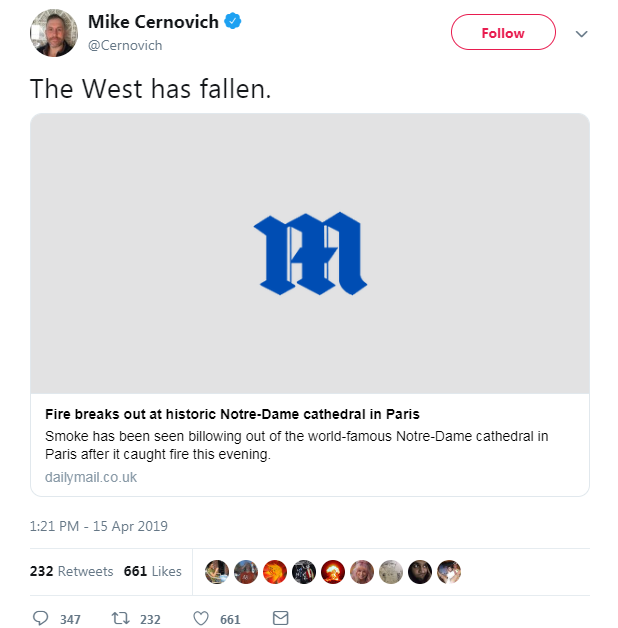 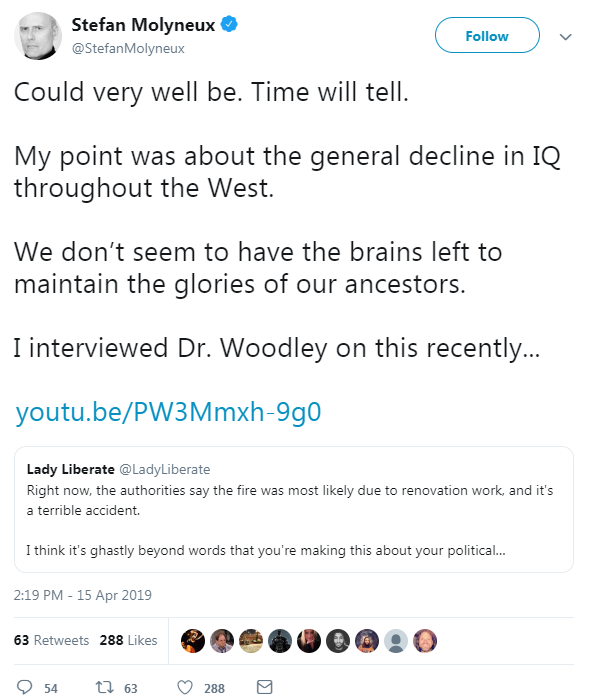 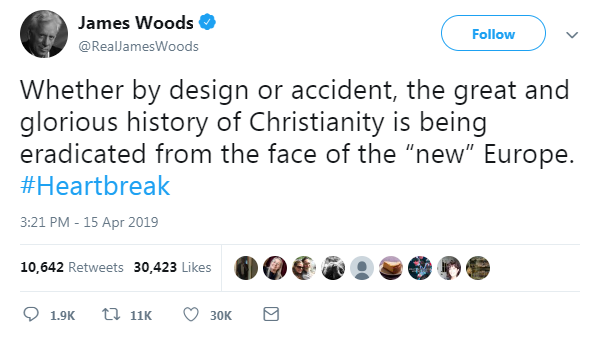 TheBlaze host Glenn Beck said that if the fire “was started by Islamists, I don't think you'll find out about it.”

As I predicted, the big QAnon “decoder” accounts are piling on the Notre Dame fire conspiracy theories. These people have six figure followings and large revenue streams based off getting gullible people to believe this garbage. Attention must be paid. pic.twitter.com/VR49bMxyw3 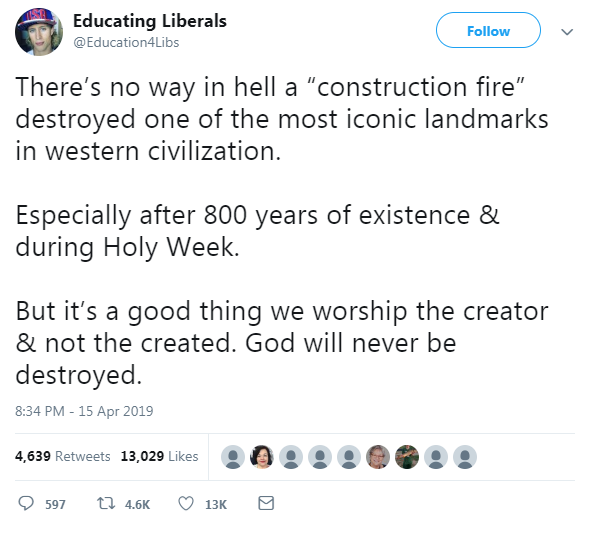 Anonymous users on far-right message boards on 4chan and 8chan blamed Muslims, suggested it was a false flag, and claimed it was retaliation from “the deep state.” 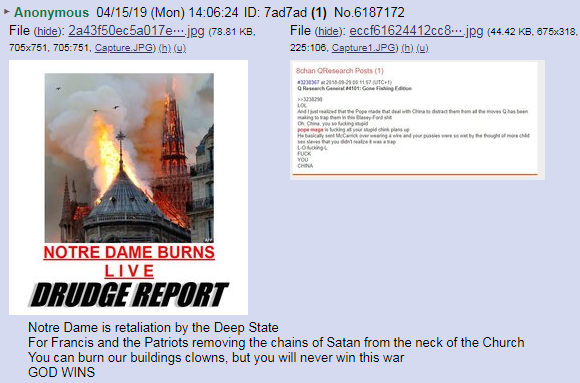