Facebook has repeatedly featured the blog Zero Hedge -- which is known for trafficking in conspiracy theories and misinformation -- on its pages for news Trending topics. And at least once in the past week, the blog was the featured news source for a story on the Trending topics section of the news feed.

Facebook has recently claimed it is taking steps to combat the spread of fake news and misinformation on its platform, which proliferated around and after the 2016 election cycle. One of the key moments leading to Facebook’s misinformation problem was its decision in August 2016 to fire its “news curators” and put the Trending topics section under the control of an algorithm. The appearance of Zero Hedge as a news source in that section shows the algorithm is still struggling with curating credible news sources.

Some of the false or dubious claims Zero Hedge has indulged in together with those websites include:

Despite Zero Hedge’s history of misinformation, between January 22 and January 26, different Facebook Trending topics pages featured it as a news source, including pages about:

On January 24, the Trending topics section on the main news feed featured the blog as its top story about the Alliance for Securing Democracy (ASD), a think tank that tracks Russian influence online. That Zero Hedge article criticized ASD for noting that Russian-linked accounts were pushing #ReleaseTheMemo, a campaign to get a memo written by House Republicans released that allegedly discredits the FBI’s investigation into Trump’s campaign. 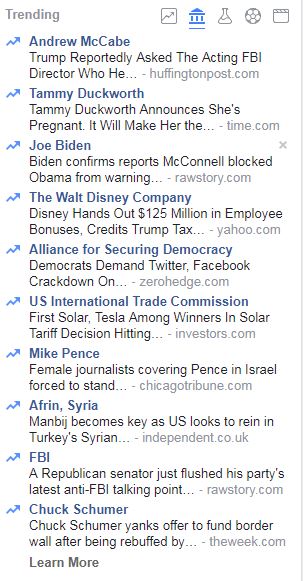 This is not the first time that Facebook has prominently promoted the blog; in October, the social media platform’s crisis response page for the Las Vegas, NV, mass shooting featured a link to an article from a site called antimedia.org that was a reprint of a Zero Hedge post.

The risk of sites like Zero Hedge finding a platform in Facebook’s Trending news stories section became clear with Facebook’s announcement that it will rely on users to determine which sites are trustworthy: If users have been seeing a source trending often, they will be more likely to trust it when asked.

Facebook’s misinformation problem will continue to persist if it keeps giving a boost to outlets like Zero Hedge that regularly peddle misinformation. While the platform has made announcements in recent weeks that it claims will lessen the impact of misinformation on the news feed, the continuing problems of the Trending topics section promoting dubious websites as legitimate news sources are just as important. Nearly two years since it fired humans to curate its Trending topics, this section -- and the website as a whole -- continues to fail its users.