As evidenced by a recent appearance former Klu Klux Klan’s leader David Duke made on a YouTube livestream, the company’s measures to deal with content produced by extremists are seemingly not enough to dissuade white supremacists from using the platform to evangelize and make money. While YouTube has put other appearances by Duke behind a warning explaining that users have flagged the content as inappropriate, the June 27 livestream has no such label. 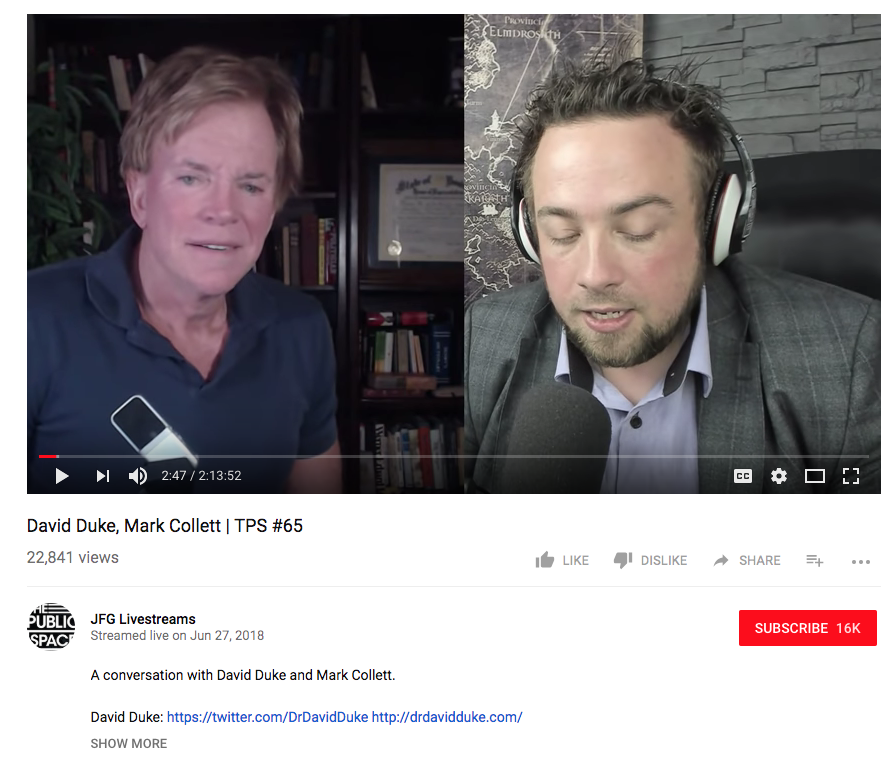 On June 27, Jean Francois Gariepy hosted a livestream -- which, as of this writing, has over 22,800 views -- on his channel featuring Duke and known neo-Nazi Mark Collett. According to The Daily Beast, Gariepy has called in the past for “a white ethnostate” and featured other extremists like Richard Spencer on his YouTube channel. Collett, a neo-Nazi who was recently elevated by Rep. Steve King (R-IA) on Twitter, has repeatedly collaborated with Duke and expressed his admiration for Adolf Hitler. The livestream included the Youtube feature Super Chat, through which users can pay for their messages to stand out during a live chat, allowing Gariepy to earn money from users paying to highlight racist slogans like “it’s OK to be white.” During the livestream, Collett bragged about the success of his channel despite YouTube’s restrictions on his “most successful video,” an anti-Semitic tirade titled “The Jewish role in the refugee crisis.” Though his anti-Semitic video displays a warning from YouTube that users have flagged the content, it is still easily accessible after a click.

Duke complained that his appearance on a June 19 livestream on Gariepy’s channel had been restricted, but Gariepy claimed that YouTube didn’t delete the video meant the platform was “admitting that there was no hate speech in there.”

DAVID DUKE: I’m still kind of recovering from our last show. I’m really kind of angry at YouTube and it’s just amazing to think that this broadcast -- there was no hatred in it, it was very decent, it was just criticizing some aspects of racism in a different way, and it had a 95 percent positive rating, it had hundreds and hundreds and hundreds of comments and they were overwhelmingly positive, and they even blocked out the ratings, they blocked out being able to comment, they blocked out being able to share directly, which really hurts a video, and they also wouldn’t put the numbers -- I think you’ve had about 40,000 views now, only you can see that, the average person cannot see that around the world. It’s just -- it’s amazing. That is very powerful propaganda, right? Because they don’t want people to know and people to see that there’s a lot of support for an idea when 95 percent of the watchers say this is great. They know that when people see that, that it makes people also tend to understand it’s OK, it’s alright to like it, psychologically, and that’s what they always do on the other side. So it’s OK to like this interview, and it’s OK to be white.

JEAN FRANCOIS GARIEPY: Absolutely. And by choosing to censor in that way and not delete the video, they’re essentially admitting, YouTube is admitting, that there was no hate speech in there. There was not a single sentence that could be interpreted as hate speech. However, as we’ve seen many times in the past, the subject of Zionism, of the involvement of Jewish people in certain industries, has always been a subject that YouTube tries to hide, tries to hide any form of encouragement and any form of social sharing. It is sad. We’ve documented right here on the show, the “Frame Game” reports the kind of advocacy groups that are behind that kind of censorship. They are advocacy groups that are tracking our activities. They are organized and financed for the purpose of reporting these videos as hate speech when in fact they are not.

On the June 19 appearance that YouTube placed behind a warning, Duke claimed Washington, D.C., is “occupied by the Zionists.” He also went on to say that Jewish people “control most of the media conglomerates” and control “Hollywood, which dishes out horrific hate propaganda, the destructive propaganda against our people, against our heritage, against true values of humanity, the true human values.”

After issuing an apology to advertisers for placing their brands over toxic content and allowing extremist content creators to make money, YouTube CEO Susan Wojcicki had reiterated her promises, saying, “We can, and we will, do better.” Yet Duke’s repeated appearances on Gariepy’s thriving channel clearly demonstrate that the mechanisms the platform has put in place to identify and combat extremism are not enough to deter content creators who profit from spreading toxic messaging.