Following the deadly high school shooting that claimed 17 lives in Parkland, FL, news sites and outlets scrambled to report details about the shooter’s identity and motive in a timely manner. Some of those details were manipulated by far-right trolls in efforts to plant misinformation and sow chaos, along the way creating a PR crisis for known white supremacists. It also created a lesson for media to not take attention-seeking extremists at their word.

The Anti-Defamation League (ADL) reported that Jordan Jereb, the leader of white supremacist militia Republic of Florida (ROF), claimed that suspected shooter Nikolas Cruz was affiliated with ROF. Other outlets quickly picked up the story, causing known white supremacists like The Daily Stormer’s Andrew Anglin and Traditionalist Worker Party’s Matthew Parrott to go into crisis management mode and distance themselves from ROF and the shooting.

Jereb, who years ago flooded the Southern Poverty Law Center with “pleas for attention,” is somewhat of a joke among extremists, mocked for trying too hard, as he posts content related to the “Read Siege” meme, which refers to Siege, the collection of writings by neo-Nazi writer James Mason. As Mason’s writings have increasingly become tied to the most violent and deadly factions of white supremacism -- like the Atomwaffen division (which has been tied to several recent killings) -- “establishment” white supremacists are attempting to distance themselves from those who act on their convictions by calling them satanists and “Siegefags”. That was exactly what Anglin did after reports surfaced that Jereb had claimed the Parkland shooter was a white supremacist, claiming it was “a setup” and that the militia was infiltrated by “satanists pretending to be Nazis:” 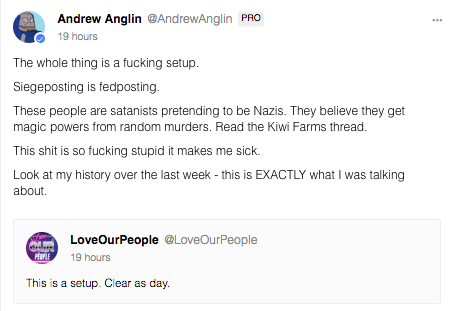 However, as local authorities found no evidence to back up Jereb’s claims that Cruz belonged to ROF, media outlets started updating their initial reporting on the story. Jereb took to Gab, the social media platform dubbed a “haven for white nationalists,” to recant his statements to ADL and media outlets, blaming it all on a “misunderstanding,” his need for a good night’s sleep, and “the lying jew media”: 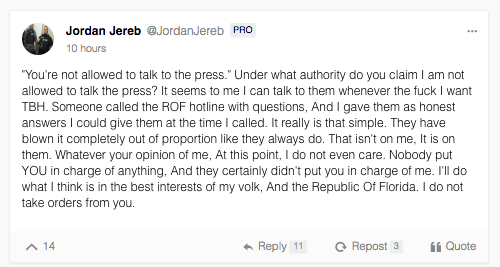 Meanwhile, trolls bragged on 4chan message boards and other platforms about conceiving and planting the hoax in the chat platform Discord, with the purpose of mocking Jereb -- who eventually played along with the hoax -- and discrediting media outlets. The hoax narrative immediately allowed prominent white nationalists some relief: 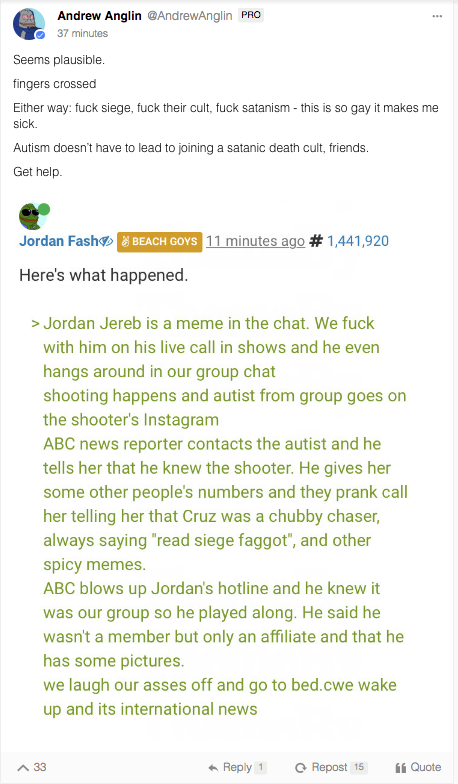 Trolls interpreted the events as their resounding victory over media, with Anglin claiming on The Daily Stormer that the hoax had been a way of “humiliating the media” and “blowing the credibility of the ADL:”

I have actually seen people saying this is not good. And I’m just like. lolwut.

Of course it is good. Humiliating the media is always good, and doing that while totally blowing the credibility of the ADL as a reliable source for information is quadruple good.

Basically, there was a 6 hour news barrage across the entire planet based on a 4chan post because the ADL will just believe any internet rumor they hear and order the media to spam it.

This demonstrates, fully, that Jewish ethnic activist groups such as the media and the ADL are so obsessed with blaming white identity movements for violence that they will act recklessly and in a totally deranged fashion.

This makes the whole idea of constantly blaming white people for everything look retarded, and it will lead to any future event where they try to do this being questioned. Because before this, they were able to get away with like, “oh this one thing he posted on Facebook – he’s a Nazi” – that shit isn’t going to fly anymore.

Beyond all of that: this shit is just fucking hilarious. This is your mainstream media, which claims that it is above reproach, not even attempting to confirm a story before they spam the entire planet with it. This was like a Sam Hyde shooter meme times six million.

The episode illustrates the perils of media taking attention-seeking white nationalists at their word: trolls can manipulate the media to plant misinformation and sow chaos, hijack national news narratives by confusing journalists, and render audiences not steeped into troll culture unable to distinguish between fact and fiction.