On Saturday, press secretary Sarah Huckabee Sanders tweeted via her official Twitter account that the owner of the Red Hen in Lexington, VA, had asked her to leave the restaurant because of the Trump administration’s policies.

Last night I was told by the owner of Red Hen in Lexington, VA to leave because I work for @POTUS and I politely left. Her actions say far more about her than about me. I always do my best to treat people, including those I disagree with, respectfully and will continue to do so

Following her tweet, supporters of President Donald Trump and pro-Trump trolls started targeting the restaurant, its staff, its owner, and her family online. The avalanche of harassment so far has included doxxing her (publishing her personal contact information) on multiple online platforms including Twitter, Facebook, and message boards Voat and 4chan. Previous harassment campaigns organized by pro-Trump trolls have had dangerous, real-life consequences for their targets, including acts of violence and potentially dangerous pranks.

On Voat, pro-Trump trolls called for a comprehensive harassment campaign and posted the personal online profiles of the members of the restaurant’s culinary team: 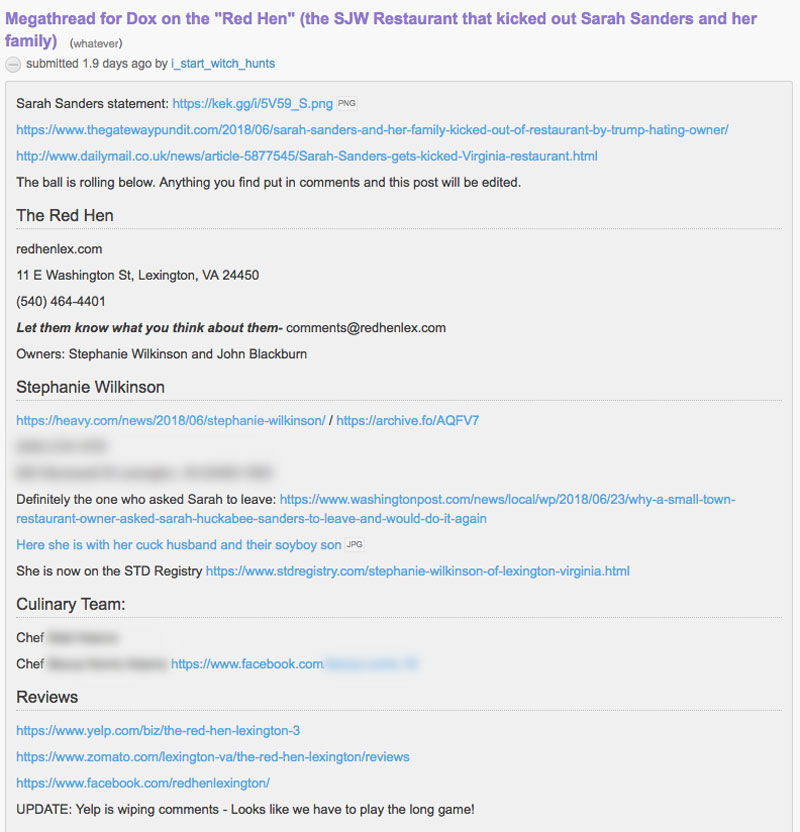 Trolls uploaded pictures of the owner’s family, including her son, on 4chan threads that included death threats. They also posted what seemed to be her personal phone number on a now-archived thread: 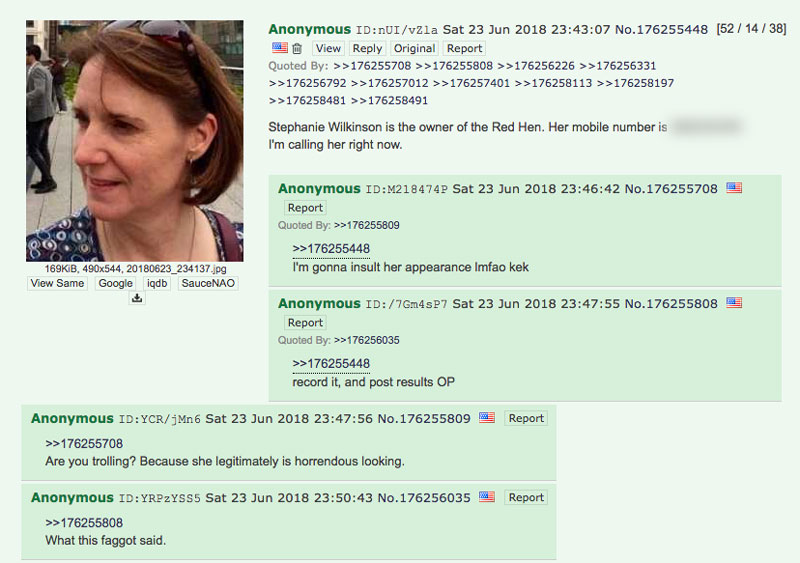 Another since-archived thread included her personal address and called on people to send her some “love mail”: 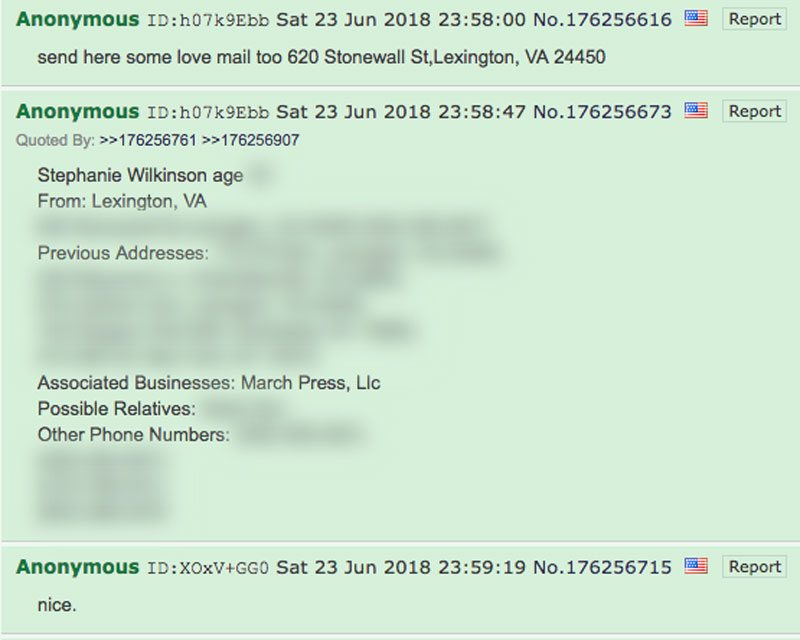 On Twitter, even though the platform specifically prohibits users from sharing such sensitive information, people shared the restaurant owner’s personal phone number: 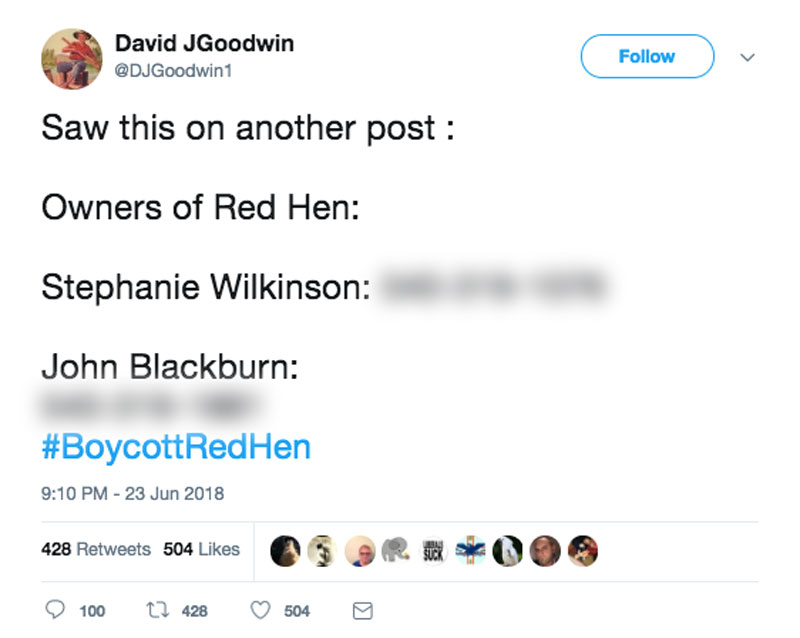 Pro-Trump pages on Facebook were also part of it: 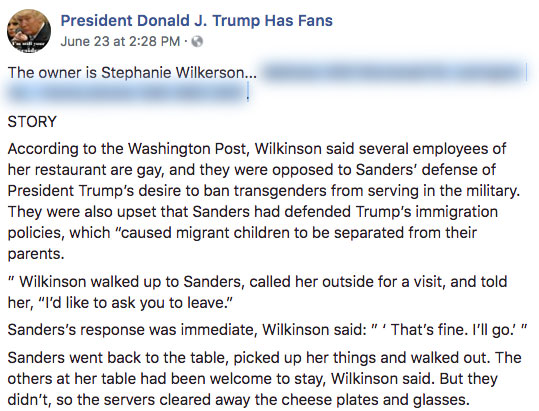 The doxxing has been accompanied by promises of violence, and prominent trolls are already connecting the restaurant to the dangerous “Pizzagate” conspiracy theory and to “Q,” a fictitious person from a related conspiracy theory about the “deep state,” “QAnon.” Pro-Trump trolls pushed the Pizzagate conspiracy theory during the 2016 presidential election, claiming that celebrities and Democratic politicians had links to a pedophilia ring hidden in the basement of a Washington, D.C., pizzeria. Even though the conspiracy theory was debunked, the story still inspired a man to open fire inside the family restaurant, which he claimed he had entered to self-investigate.

so looks like it took just 24 hrs for the Red Hen to get Pizzagate'd. jesus. pic.twitter.com/doJfh0mPTi

It is extremely worrisome to see trolls sharing the restaurant owner’s personal information, particularly given the dangerous incident that followed the targeted harassment of Parkland shooting survivor David Hogg. After trolls made his personal information public and spread it on message boards, someone made a prank call to the police and claimed there was a hostage situation inside Hogg’s home, prompting deployment of an armed police team. The act is known as “swatting,” and it’s a harassment tool that trolls aim at their targets; on at least one occasion, it has proved fatal.

Another terrifying consequence of harassment campaigns unleashed by pro-Trump trolls is that they sometimes target parties with no connection to the situation spurring the attacks. In this case, a D.C. restaurant with the same name as the Lexington establishment has been “bombarded with calls, emails,” and “death threats” -- and was egged over the weekend --  despite having no connection to the Virginia Red Hen. Similarly, after the February school shooting in Parkland, FL, Infowars host Alex Jones accused an innocent man of being the shooter, unleashing “ridicule, harassment, and threats of violence” against him.

Media outlets, however, seem to be focusing their coverage on whether the actions of a private business owner who followed her conscience reflect intolerable incivility. Meanwhile, reporting on the dangerous harassment and attacks that have followed is taking a back seat.

The fact that Trumpers physically assaulting a restaurant unrelated to the controversy will attract less coverage than Red Hen declining to serve Sanders is a reminder that the actual issue here is the disproportionate clout of conservative propaganda television and not civility.