A post on 4chan’s “politically incorrect” message board contains instructions to help spread a campaign to influence the upcoming Swedish election by reaching out on Reddit to “redpilled Swedes” (the red pill is a popular “alt-right” meme to describe far-right ideological converts), attending rallies of the anti-immigrant nationalist party Sweden Democrats (SD), and distributing pro-SD propaganda both online and in Sweden.

Sweden is holding a general election in September 2018 to elect members of Sweden’s law-making body, the Riksdag, led by Prime Minister Stefan Löfven, who hopes to win another term. Though Löfven’s party is ahead, his coalition partners are struggling, and the anti-immigrant Nazi-linked Sweden Democrat party, now polling third in Sweden, is slated to make some gains.

Though many 4chan campaigns are launched primarily to troll the left and create chaos with limited influence outside of the online message boards, this Swedish campaign resembles the far-right strategy to sow global discord through anti-globalist organizing. Last year, in what is now considered a cautionary tale of 4chan’s role in the disinformation ecosystem, a 4chan campaign that disseminated fake documents to smear Emmanuel Macron, the current president of France, was eventually referenced by far-right candidate Marine Le Pen herself. A similar campaign was attempted during the 2017 German elections, though to less effect. In addition to Sweden, 2018 is a crowded election year across Europe, with rising nationalist leaders competing in high stakes elections in Italy and Hungary later this year. Just last week, the Czech Republic elected its xenophobic, populist leader to a second term. His opponent’s campaign was marred by false accusations levied on social media and attacks on his pro-immigration stance with billboards like “Stop immigrants and Drahoš! This country is ours.”

The ongoing 4chan campaign is characterizing the upcoming Swedish election as “the last chance Sweden has to stop itself from falling over the edge,” stoking fears of immigration and multiculturalism. It’s calling for support of the Sweden Democrats because “we need the SD to start putting Sweden right and push the overton window.” Pushing the “Overton Window” (a concept that describes the spectrum of what’s acceptable to say) to make hate speech that targets ethnic groups or immigrants acceptable again, has become part of the crusade of white supremacists. The 4chan campaign also describes a plan to put up posters in “leftist strongholds and areas with high immigration” on January 31, as well as attend SD leader Jimmie Åkesson’s rallies to show support. 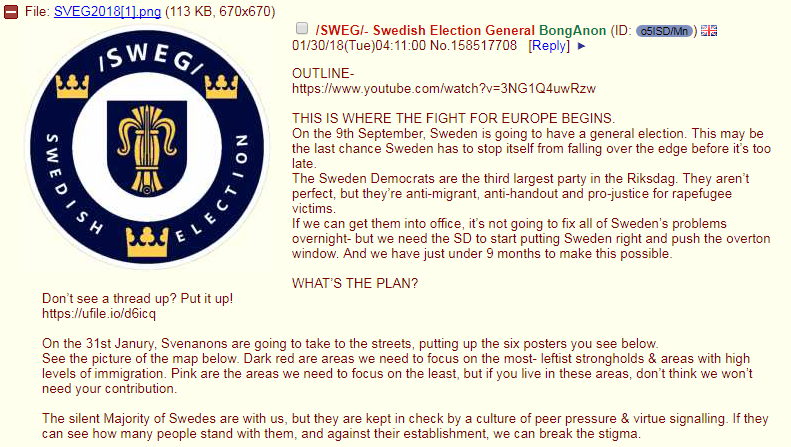 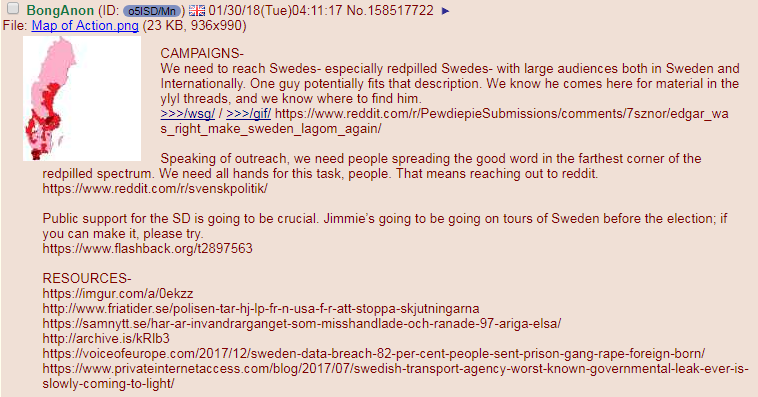 The post also included “resources” in the form of articles from Swedish hate sites Fria Tider and Samhällsnytt (a site previously known as Avpixlat and linked to Sweden Democrats) and a repository of anti-immigrant posters and memes like “It’s OK to be Swedish,” a take on the American white nationalist meme, “It’s OK to be white,” which was also born on 4chan. The propaganda mirrors the weaponization of memes that has become a popular tactic in the United States, where far-right and “alt-right” trolls have not only deployed memes to attack political candidates they opposed online, but started “meme wars” that translated into real-world harassment campaigns against journalists.

Although the most recent posting about the campaign is from January 31, a YouTube video embedded in the post discussing the campaign alluded to a similar, archived 4chan post from January 6. There are several additional archived posts on the subject, one of which indicates support for the NMR, the neo-Nazi Nordic Resistance Movement, but ultimately identifies Sweden Democrats as a more politically viable choice. The initial campaign appears to have been launched December 16, 2017.

In the video entitled “Election year in Sweden,” a YouTube personality known as Angry Foreigner commented that the “information war will be taken to new levels” in the run-up to Sweden’s 2018 election, lamented the so-called censorship of “alternative media,” and called for his audience to “get more active in real life,” by spreading propaganda through posters and memes as laid out by the 4chan post. A January 24 edition of the 4chan thread acknowledged Angry Foreigner’s “shout out,” claiming that it’s “really helped the visibility of the campaign.” The campaign also seeks a partner in Swedish YouTube celebrity troll and far-right darling PewDiePie, though the hashtag #PewDiePieForSweden has gotten almost no traction on Twitter.

Less than three months ago, 4chan trolls launched a hoax campaign to change the Swedish flag in order to mock proponents of multiculturalism, consistent with the online far-right ethos of “triggering the libs.” That campaign spread to the pro-Trump subreddit /r/The_Donald and conspiracy website Infowars before the petition that spurred the campaign was removed.