After HuffPost’s Luke O’Brien published an investigative piece profiling the woman behind a prolific Twitter account that regularly spews anti-Muslim vitriol, MAGA trolls reacted by falsely claiming the piece published the women’s personal information and by singling out O’Brien for harassment. On 4chan, trolls even suggested creating a database containing personal details of “leftist journalists” to facilitate harassment against them.

Much of the backlash was led by the subject of the piece herself, who goes on Twitter by Amy Mek, short for her name, Amy Mekelburg, and uses a real photo of herself. 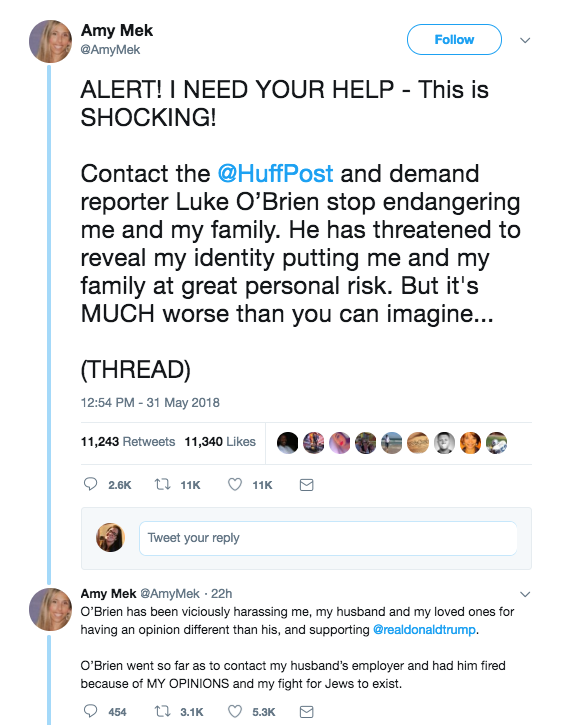 Prominent Pizzagate conspiracy theorist and One America News Network correspondent Jack Posobiec and opportunistic MAGA troll Mike Cernovich also helped spread the false narrative that O’Brien had doxxed the woman, with anti-Muslim troll Pamela Geller presenting her as merely a “patriot who tweets” while ignoring the vitriolic hatred against Muslims she regularly spreads on her prominent platform. 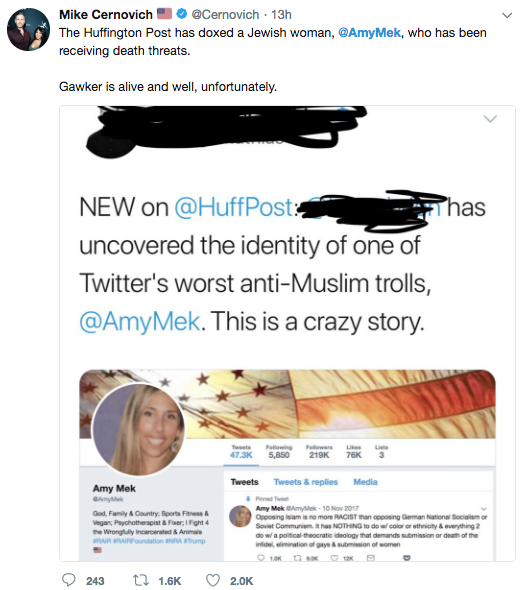 As the New York Times reported, doxxing -- or making an individual’s identifying or contact information public with malicious intent -- “has emerged from subculture websites like 4Chan and Reddit to become something of a mainstream phenomenon.” Trolls are arguing O’Brien’s investigative journalism was equivalent to doxxing, but he didn’t provide a phone number, address or email address for her (the usual approach to doxxing), and the story’s supposed outing wasn’t much of a stretch given that her real photo was attached to her Twitter account, which uses a name similar to her legal one. As Right Wing Watch’s Jared Holt -- who used to work for Media Matters -- explained, O’Brien’s piece is “different from what is commonly thought of as ‘doxing’” because “he did not publish personally identifiable information such as an address, which could put Mekelburg in potential danger.”

Also, Mekelburg is hardly an unassuming private individual of no interest to the public. She has become extremely prominent on Twitter, and she has done so by posting vitriol that poses a real threat to entire communities.

Nevertheless, on 4chan, trolls are reacting to O’Brien’s piece by proposing the creation of a database housing the personal information of those they deem “leftist journalists”.

Within the forum, suggested tactics include targeting “national rag journos” with “reach and audience”:

A member suggested using Wikipedia as a model:

Another member pushed the idea of adding activists to the list, pre-emptively gathering their information to deploy “when they do something” and including information that could help locate them outside of social media:

Online message boards have proven to be hubs that house conspiracy theories, hoaxes, and harassment campaigns against individuals the far-right dislikes. Targeting journalists could have a chilling effect on the coverage of extremism and hate.