Scott Beierle, a man with an online footprint of far-right misogyny and a police record of groping women, opened fire at a yoga studio in Tallahassee, FL, on November 2, killing two women before shooting himself. As reported by Buzzfeed, in his online videos, Beierle had openly praised Elliot Rodger, who went on a misogyny-fueled killing rampage in 2014 and has become a hero for the women-hating “incel” (involuntary celibate) community online. This is the fourth incident of violence connected to far-right extremism in the U.S. in just the past two weeks.

In reaction to the shooting and reports of Beierle’s record of misogyny, members of the anonymous online forum incels.is -- a new domain established after the forum reportedly got suspended for violating its past registrar’s anti-abuse policies -- shared and gleefully consumed the content of Beierle’s YouTube videos; and at least one person claimed he downloaded Beierle’s video presumably as a contingency in case social media platforms took it down. The same poster claimed to have found the shooter’s website and promised to post it to the forum.

Another poster claimed that comments on the shooter’s YouTube videos that denounced his misogyny are the sort of thing that radicalize white men. 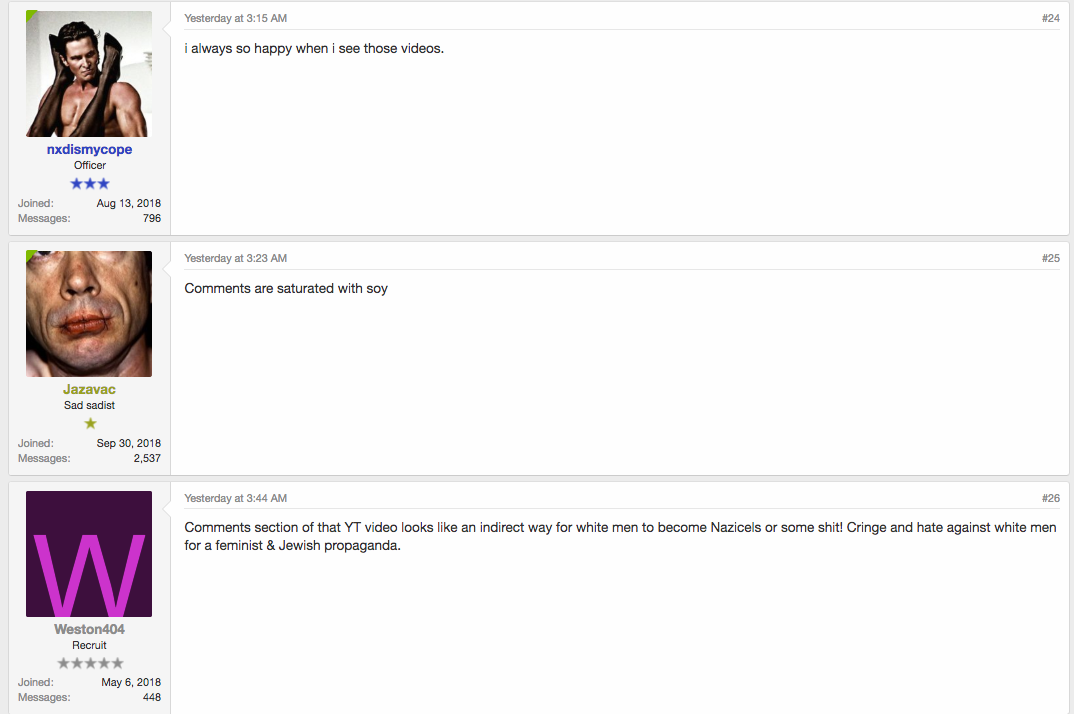 In their comments about the shooter's rants in which he condemned white women who date Black men, some posters underscored the intersection between misogyny and white supremacy: One claimed that Beierle’s “views on race mixing are not wrong,” and another questioned how many white incels would follow the shooter’s example in response to interracial couples. As shown in the screenshot, one poster is already using a picture of Beierle as the profile's avatar.

A member of the forum characterized the shooter as a “legend,” while another complained that he “only killed 2” women:

Another thread warned readers that nothing will stop sexually frustrated men from going on rampages. The thread featured “an open letter to cucks” (the far-right’s go-to insult against those perceived as weak for embracing political correctness) supposedly explaining “why you can’t do shit about people going ER,” using incel shorthand for Elliot Rodger.

The poster warned “cucks” and “foids” (a dehumanizing term incels apply to women) that they will “NEVER, EVER, EVER” stop men who are frustrated sexually from seeing “blackpill content online” and getting inspired to go on killing rampages. “Blackpill content” refers to messaging telling men who consider themselves involuntary celibate that the world is stacked against them and there “can be no personal solutions to systemic problems.” 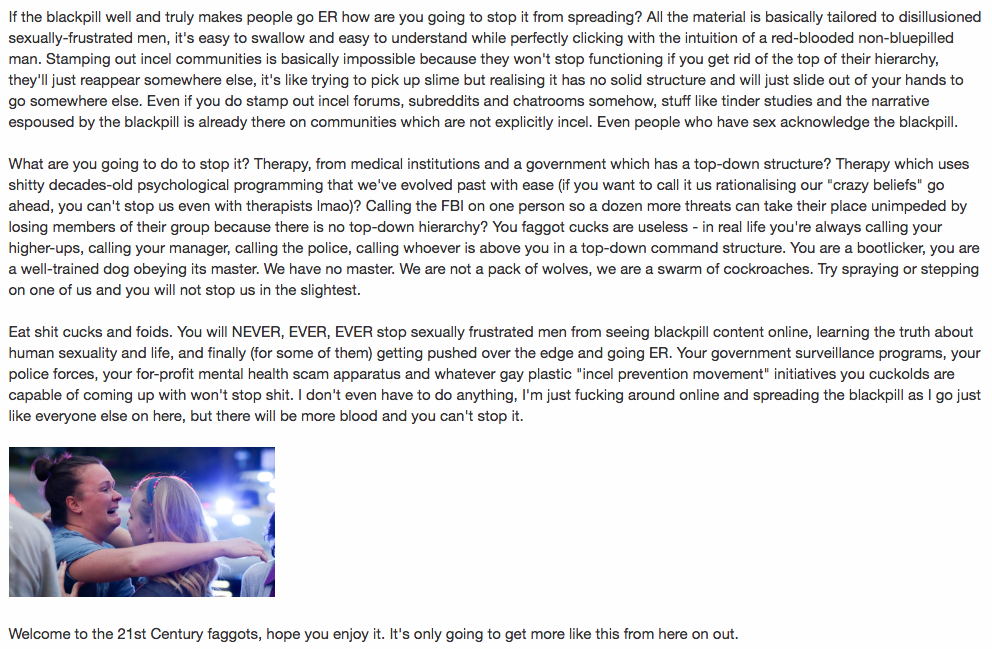 Replies to the open letter looked like battle cries: “We’ll get down every one of you,” one user wrote; another, who bragged about having an AK-47 semi-automatic rifle, posted, “Come and take me”:

Other posters called on other incels to build “muscular physiques” that make them strong enough to “hurt others”: 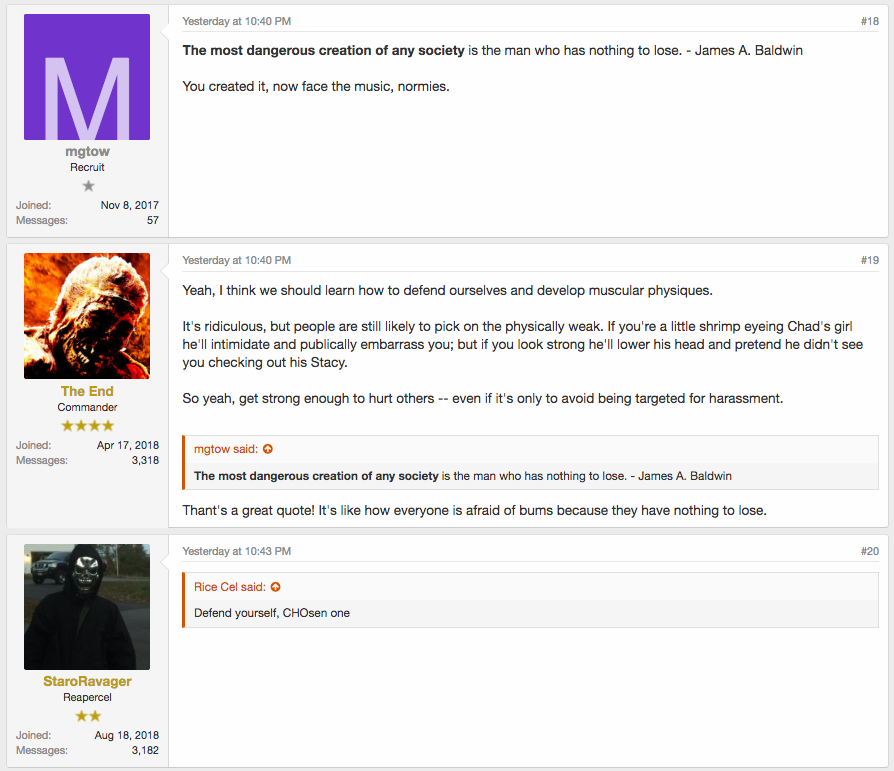 A member of the forum speculated about whether an account that had posted “going ER” on November 2 in a similar forum for incels, Truecels.org, belonged to the shooter. Truecels includes a board called “hall of heroes” that honors -- among others -- Rodger, terrorist Timothy McVeigh, and Yamaguchi Otoya, a far-right assassin who killed the leader of the Japanese socialist party in 1960. Proud Boys founder Gavin McInnes recently honored Yamaguchi Otoya by re-enacting the violent murder at the Metropolitan Republican Club in New York City.

Accounts in these forums are anonymous, so anyone with an account can participate on different message threads. Members can also participate on Discord and Telegram chats after some vetting from the community. In the Truecels forum, posters also questioned whether the shooter had an account, expressing concern that screenshots of his profile could inspire a feminist “to stage a crisis to make it look like incels are violent … right before an election:” 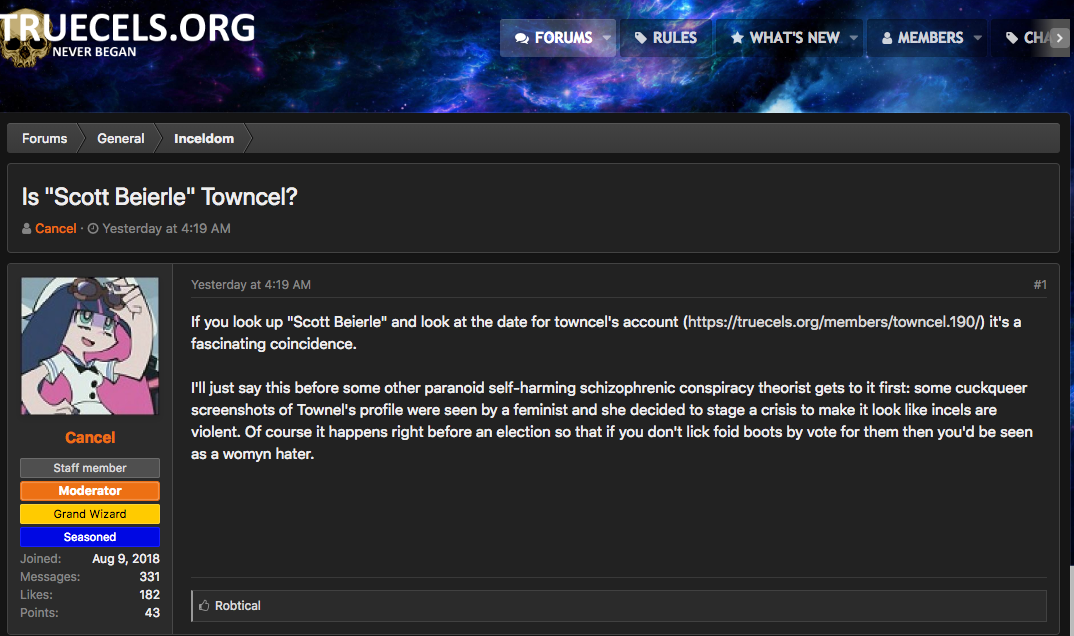 In just the past two weeks, four far-right extremists have gone on violent, hate-fueled attacks around the U.S. On October 24, 51-year-old Gregory Bush attempted to enter a predominantly Black church in Jeffersontown, KY, before heading to a Kroger grocery store where he shot two Black people, the first in the store and the second in the parking lot. Two days later, a man with a long record of posting right-wing content and threats online mailed explosive devices to prominent Democratic figures and the cable news network CNN. On October 27, a man who posted virulently anti-Semitic messages on the website Gab, known as a “haven for white nationalists,” went on a murderous rampage in a synagogue in Pittsburgh, PA.

Given the violent posts about women, racial and ethnic minorities, and religious groups that can be easily found in online forums, and the common thread of far-right content posting among attackers, it’s not far-fetched to think that the next far-right violent attack might be brewing online. On mainstream social media platforms like Twitter, extremism is not particularly difficult to find: The incels forum links to its an official Twitter account, and accounts that post anti-Semitic and white supremacist content fly under the radar undisturbed. And yet, right-wing media figures refuse to either connect the dots between far-right rhetoric and the extremism it inspires or take responsibility for mainstreaming and empowering extremists.