President Donald Trump promised to act in reaction to Google purportedly “suppressing voices of Conservatives” in pre-dawn tweets this morning. The comments came after he tuned in to a recorded Fox program in which several of his dedicated followers fulminated about a sketchy study concluding that the company is “manipulating its algorithm to prioritize left-leaning news outlets in their coverage of President Trump.” This is no way to run tech policy.

In a pair of tweets issued beginning at 5:24 a.m., Trump said that Google search results for “Trump News” had been “RIGGED” to ensure that reports from “Fake News Media” were highlighted and that conservative outlets were “shut out.” He concluded, “This is a very serious situation-will be addressed!”

Trump was tweeting while watching last night’s edition of Fox Business’ Lou Dobbs Tonight, as his subsequent tweets demonstrated. A segment on that program highlighted an August 25 report in the conservative website PJ Media headlined “96 Percent of Google Search Results for 'Trump' News Are from Liberal Media Outlets.”

Good morning. The president was up before dawn this morning watching and tweeting about last night's episode of Fox's Lou Dobbs Tonight.

PJ Media supervising editor Paula Bolyard wrote the piece after she ran a Google News search for “Trump,” took the first 100 articles, and “analyzed the results using Sharyl Attkisson's media bias chart.” This is an absurd methodology, as Attkisson’s chart (embedded below) places mainstream outlets like The New York Times, The Washington Post, and CNN on the far left -- indeed, further to the left than it places avowedly conservative outlets like The Weekly Standard, The Federalist, or National Review to the right. If you believe that to be an accurate view of the state of the news media, I cannot help you. (Attkisson is this decade’s Bernie Goldberg, a former CBS reporter with a history of conspiracy-minded reporting who left the network in 2014 and carved out a niche in conservative media in part by portraying herself as a victim of liberal media bias.) 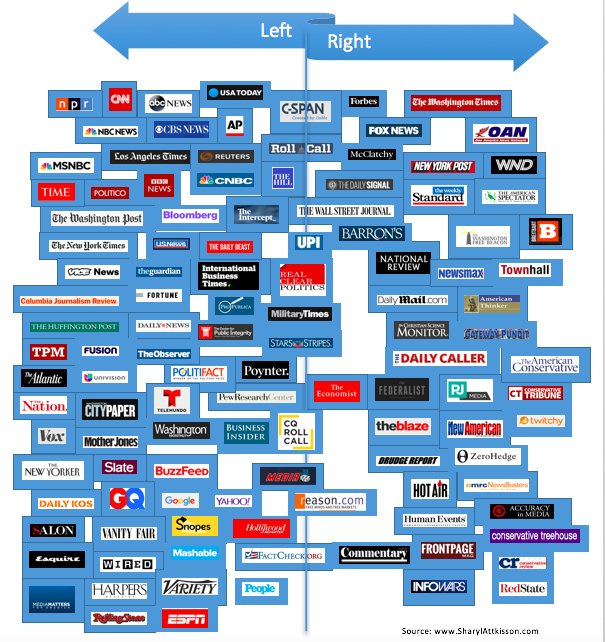 In a Twitter exchange this morning with the tech ethicist Matthew Stender, Bolyard acknowledged she had not conducted a “scientific study,” but said she stood by her “anecdotal results.”

That might have been the end of the story. But the Drudge Report featured Bolyard’s post, and then Dobbs picked it up last night. The host, whom the president reportedly venerates as “a political and populism godfather,” opened the segment by claiming the report shows that Google is “blatantly suppressing conservative media outlets.” He then turned to Diamond and Silk, pro-Trump YouTubers who have become a cause célèbre on the right due to their baseless claims of censorship by tech companies. True to form, the pair claimed Google is engaged in “tyranny” and “political lynching” to prevent people from learning the truth about “our beautiful president.”

Diamond added that “somebody's going to have to step in and take a look at this here.” And the president, engaged in his usual practice of watching recorded Fox programs, said this morning that he would. All that’s left to determine is which Republican senator decides to answer the president’s call and garner some of the limelight when tech executives testify before the Senate intelligence committee next week. A right-wing conspiracy theory moved through the conservative noise machine to one of the president’s on-air apparatchiks, and now it may end up guiding federal tech policy.