Since Joe Biden was declared the winner of the 2020 presidential election early last month, the nationwide right-wing media apparatus has entered a voter fraud fever dream in which dead people voted by the millions, wheeled containers of camera equipment were actually suitcases full of ballots, and voting machines across the country were rigged by the Democrats and China.

Nowhere has this conservative media fantasy been on display more than in Georgia. As the state prepares for two crucial Senate runoff elections in early January, right-wing media outlets are not only relitigating the outcome of the state’s presidential race but they are also offering it as evidence the upcoming contest will be “rigged” and churning out an excess of content alleging widespread voter fraud.

Serial misinformers like Fox News and Breitbart have been primary organs for the amplification of such deranged nonsense ahead of Georgia’s runoff elections. But there’s also an emerging suite of hyperpartisan local news sites that have seized on fading trust in the news media and the insolvency of local journalism to shepherd audiences toward online posts that tell them a global plot to destroy America is underway in the state.

As right-wing media and hyperpartisan local news sites like Georgia Star News have turned focus to the runoff, here are a few of the laughable narratives of voter fraud and conservative propaganda the site has directed at Georgia voters the past few months.

The Yang gang is coming to town

In early November, right-wing outlets seized on a tweet from former Democratic presidential candidate Andrew Yang encouraging campaign volunteers to “head to Georgia” ahead of the runoffs. Although Yang said nothing of his intent to register to vote in the state, Georgia Star News spun a voter fraud conspiracy theory out of the tweet. On November 10, the site ran an article accusing Yang and other Democrats of engineering a plot to “stuff ballot boxes in runoff elections” by “advocating for ‘blue voters’ to become Georgia residents.” (This is, of course, not true.) 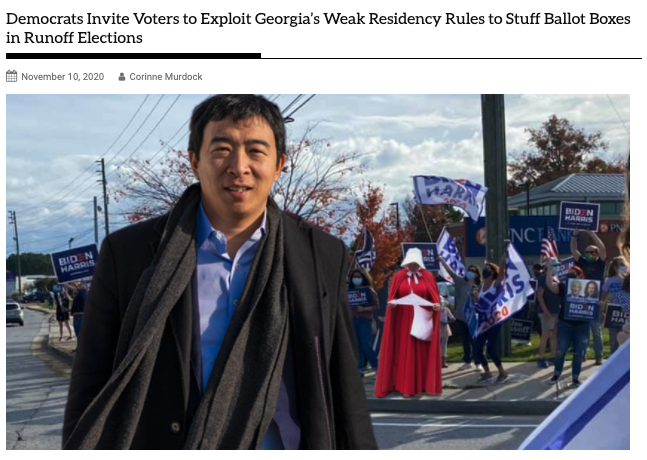 Meanwhile, John Fredericks, the publisher of Georgia Star News and host of The John Fredericks Show, echoed the claim on his radio program and on former Trump adviser Steve Bannon’s War Room podcast. (Fredericks launched a Virginia-based Star News publication this summer but recently temporarily moved his operation to Georgia ahead of the runoffs.) On November 11, Fredericks told Bannon that the Georgia Republican Party chairperson had referred Yang and his social media posts to the Department of Justice for investigation of potential voting crimes.

Ironically, a Republican lawyer from Florida is currently under investigation for registering to vote illegally ahead of the Georgia runoffs after he was caught in a Facebook Live video telling a GOP group: “We absolutely have to hold the Senate and we have to start fighting back, and we have to do whatever it takes. … And if that means changing your address for the next two months, so be it. I’m doing that. I’m moving to Georgia and I’m gonna fight and I want you all to fight with me.” Additionally, according to the Law & Crime website, the attorney “reportedly repeated his brother’s name and address [in Georgia] out loud for the party faithful to copy it down in the hope that they will actually follow his advice and illegally register to vote in the upcoming elections.” This case was ignored by Fredericks and the Georgia Star News in their coverage of Yang’s comments.

Georgia Star News has also launched more predictable attacks against leading Democratic figures in the state. A recent article criticized Stacey Abrams, who has drawn ire from the right for her voter registration efforts, for auctioning off a signed copy of a romance novel she wrote under a pseudonym. The publication has also repeatedly characterized Democratic candidate Raphael Warnock as an anti-Semitic socialist and even suggested he was involved in a child abuse cover-up -- a claim which has been thoroughly debunked. Another Georgia Star News narrative even links the two Georgia Democratic figures together through past work for a voter registration group to suggest they are part of a new investigation into mail-in voting fraud.

Everything is connected to China

Another strategy right-wing media have adopted to spread misinformation ahead of the runoffs is wielding connections to China, no matter how thin, as a cudgel against the Democratic candidates -- or even Republicans seen as insufficiently loyal to Trump.

Some of the most deranged theories to emerge this cycle deal with a company, Dominion Voting Systems, that manufactures voting machines used in Georgia and other states. According to pro-Trump attorney Lin Wood -- who has ignited something of a civil war in Georgia Republican politics over his baseless claims of voter fraud -- the company has connections to China (which isn’t true).

Efforts underway to verify. If true, this confirms other evidence that Communists intend to overthrow our government to get our precious land.

NOT ON OUR WATCH.

Georgia Star News has dutifully reported on Wood’s baseless claims about the company, which Wood has often shared on Fredericks’ radio show, along with other Dominion-related conspiracy theories, including “rumors of a secret U.S. military raid on purported servers in Germany” -- yet another debunked election story circulating in right-wing media.

Georgia Star News has also cast Democratic senate candidate Jon Ossoff as beholden to China because a Hong Kong-based media company once paid to license a documentary that he helped produce. But as even Fox News was forced to admit, the videos made by Ossoff’s firm “are not regime propaganda, but rather independent journalism ... later licensed to other companies.”

Georgia Star News has also used the China cudgel against the GOP to pressure Georgia politicians to reverse the results of the election.

A recent Georgia Star News story -- which was originally published on the pro-Trump website American Greatness -- cast the state's Republican Gov. Brian Kemp as a shill for China because he signed a contract to use Dominion’s voting machines weeks after meeting with a Chinese diplomat. (Kemp, who rode a Trump endorsement to the governor’s mansion in 2018, has emerged as a villain to Trump supporters because of his refusal to unilaterally overturn his state’s election results.) 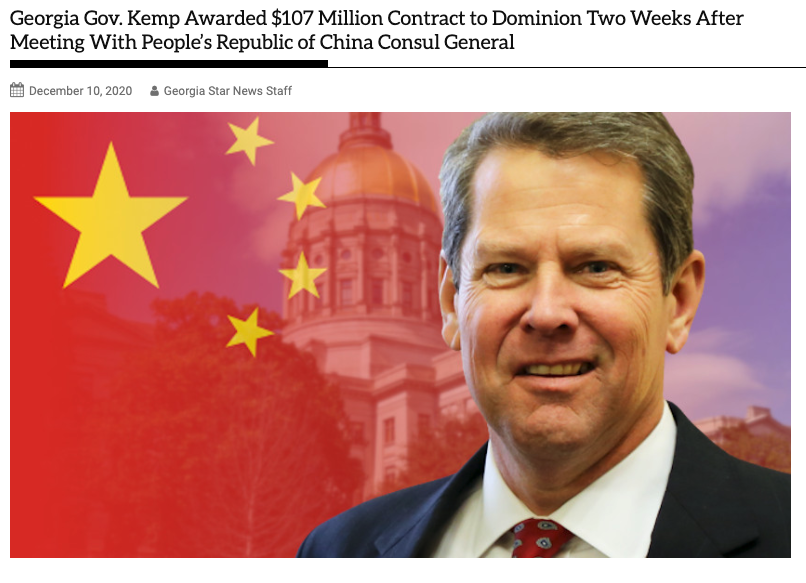 There’s a plethora of other absurd examples, whether it’s the Star’s credulous reporting on dubious affidavits cited by the Trump campaign to allege voter fraud or repeatedly echoing Wood’s dangerous claims that the election results in Georgia will eventually be overturned.

No matter how fantastical this ceaseless amplification of voter fraud conspiracy theories, far-fetched allegations about China, and baseless contestations of the November election results have proved to be, major right-wing outlets and their hyperpartisan local counterparts will continue to launder these GOP narratives into online news coverage, serving as a propaganda mouthpiece in hopes of swinging next month’s Senate runoff elections.