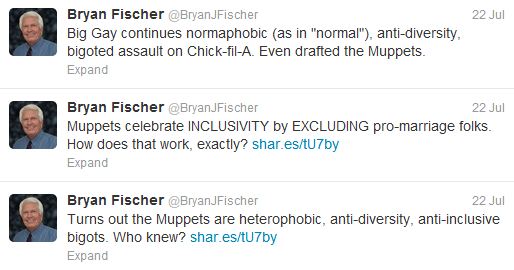 Members of the conservative media are attacking The Muppets for its founding company's decision to sever ties with Chick-fil-A, which supports numerous anti-gay causes. The Muppets have been called “heterophobic, anti-diversity, anti-inclusive bigots,” and against family and Christian values. Conservatives, including Fox News, recently criticized The Muppets for allegedly promoting liberal propaganda in their 2011 film.

In the wake of criticism, Chick-fil-A President Dan Cathy recently defended the company's support of anti-marriage equality groups. In a statement on Friday, The Jim Henson Company, which partnered with Chick-fil-A on a promotion, announced that it “has celebrated and embraced diversity and inclusiveness for over fifty years and we have notified Chick-fil-A that we do not wish to partner with them on any future endeavors. Lisa Henson, our CEO is personally a strong supporter of gay marriage and has directed us to donate the payment we received from Chick-fil-A to GLAAD.”

Though The Jim Henson Company was founded by the creators of The Muppets, the company sold the rights to The Muppets in 2004 to The Walt Disney Company, which produced their most recent movie.

Breitbart News wrote that the “Muppet brand continues to shed its apolitical cloth, fur and ping pong ball eyes” and criticized the Muppets movie for casting “an eeee-vil oil baron as its villain, and Kermit the Frog and Miss Piggy let loose with an anti-Fox News gag during a press conference." The Fox Nation website linked to a portion of a Reuters article noting the decision and headlined it, “The Muppets Get Political.”

If Jim Henson wants to have Kermit marry Fozzie Bear in a ceremony presided over by Beaker in assless chaps, far be it from me to criticize that. Actually, come to think of it, I would criticize the hell out of that. But for now, let me just note that it's sad that Jim Henson doesn't think the Muppets should be associated with Chick-Fil-A because it's taken a pro-Christian, pro-family stand. Christians should keep that in mind before they allow their children to be exposed to the Muppets.

In a July 23 article, WorldNetDaily wrote that “Henson's company is just one more such company dependent on America's families with children to adopt the politically correct support for homosexual behavior.”