“Why suffer through the annihilation if it’s not going to matter?” California professor Christine Blasey Ford told The Washington Post in explaining why she had decided in late August not to come forward and tell the world that Supreme Court nominee Brett Kavanaugh had sexually assaulted her at a party when they were teenagers in the early 1980s. It’s easy to see why she might feel that way. After her story began to leak out but before she was publicly identified, Kavanaugh’s supporters began questioning her motives. And once those leaks pushed her to speak out publicly, a sloppy, intellectually bankrupt coalition of right-wing internet sleuths and members of the conservative media echo chamber began seizing on any scrap of information they could find to try to discredit her.

I wrote yesterday about a fever swamp of the foolish and the politically motivated who targeted unflattering student reviews of a different Christine Ford in order to smear Kavanaugh’s accuser as “dark, mad, scary and troubled.” At the same time, that nexus pushed a baseless conspiracy theory that Ford held a grudge against Kavanaugh because his mother had presided over the foreclosure of her parents’ home in 1996.

This was, as more careful reviews of the record found later that day, a dramatic and cynical misreading of publicly available court documents. Martha Kavanaugh, who was a Montgomery County Circuit Court judge at the time, did preside over parts of the 1996 foreclosure case involving Ralph and Paula Blasey, Ford’s parents. But her role was actually to dismiss the case after the Blaseys refinanced their house, which the family still owns to this day.

The foreclosure conspiracy theory took a well-trod path through the pro-Trump echo chamber.

#MAGA social media users dredged up the court documents and incorrectly interpreted them.

Storytelling pro-Trump websites that trawl the online social space for content and have no fact-checking standards then picked up the tale. Jim Hoft, whose Gateway Pundit website consistently falls for fake stories and pushes conspiracy theories, headlined his piece on the story “Bad Blood: Judge Kavanaugh’s Mother Foreclosed on Far Left Accuser’s Parents’ Home.” Pacific Pundit’s take was “Christine Blasey-Ford Motive: Revenge - Kavanaugh’s Mother Judge Against Parents in Foreclosure Case 1996.” America First Media Group, a prominent Seth Rich conspiracy site, also got in on the act. And on, and on, and on.

As those stories went viral, more prominent right-wing pundits began promoting them. In a since-deleted tweet, Fox News host Laura Ingraham highlighted the America First Media Group piece. The Resurgent’s Erick Erickson, who has spent the last few days flailing incoherently over Ford’s story, urged reporters to “honestly vet” the story that “a growing body of blogs” were posting about. 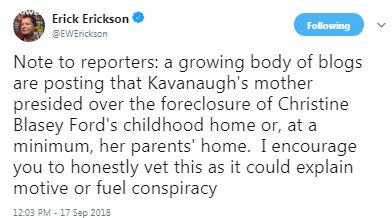 And then those reporters vetted the story, making all the conservatives involved look like the cynical fools that they are.

Crucially, and as with the student reviews hatchet job, even if the smear artists had their facts in order, their argument would still be nonsense. Let’s say Kavanaugh’s mother really had cost Ford’s parents their home. How would Ford’s purported “motive” come into play? Ford told her therapist about the assault in 2012, per notes she has provided, and she reportedly told a friend about it last year, well before Kavanaugh’s appointment. That’s a lot of evidence to plant in advance in order to get her supposed revenge.

But that’s how the right-wing smear machine operates -- its members take a handful of facts and twist them and twist them in the hope that they can convince their audience not to believe their targets. Those right-wing readers will probably never hear the truth; they’ll continue to believe that Ford is a terrible teacher who’s out to get the son of the judge who foreclosed on her parents’ house. Meanwhile, Erickson, Hoft, and their ilk will simply move on to the next smear.

This is how bad it got in the first day after Ford came forward. With the Senate Judiciary Committee asking her to give testimony before them next week, there will be more annihilation to come.