Fox is hyping comments by former RNC chairman Michael Steele in which he criticized the NAACP for “signing up with an organization like Planned Parenthood,” which he said had worked in the past to “eliminate and limit” African Americans and other minorities. Guest hosting for Bill O'Reilly, Fox News contributor Laura Ingraham aired Steele's comments, which were made earlier today on Ingraham's radio show. Steele's comments were also touted by Fox Nation.

Unmentioned by Ingraham and Fox Nation, however, is that fact that Martin Luther King Jr. accepted an award from Planned Parenthood and praised the organization for its dedication to family planning.

During a discussion of Planned Parenthood on Ingraham's radio show, Steele stated: “I have yet to understand how when you look at something like the NAACP signing up with an organization like Planned Parenthood that has a part of its history and its charter and its existence, you know, the use of abortion to eliminate and limit the number of African American and other minorities in this country, I -- to me, it's just beyond the pale.”

Tonight on The O'Reilly Factor, after discussing the NAACP's recent endorsement of same-sex marriage with Fox's Juan Williams and Mary Katherine Ham, Ingraham said: “I interviewed Michael Steele on my radio show this morning about the views of black voters on the issue of abortion and abortion in the Democratic Party.” She then aired Steele's comments:

Steele's comments were also hyped by Fox Nation, which linked to a Mediaite article on the comments with the headline “Michael Steele: Planned Parenthood Used Abortion To 'Limit' African-Americans.” 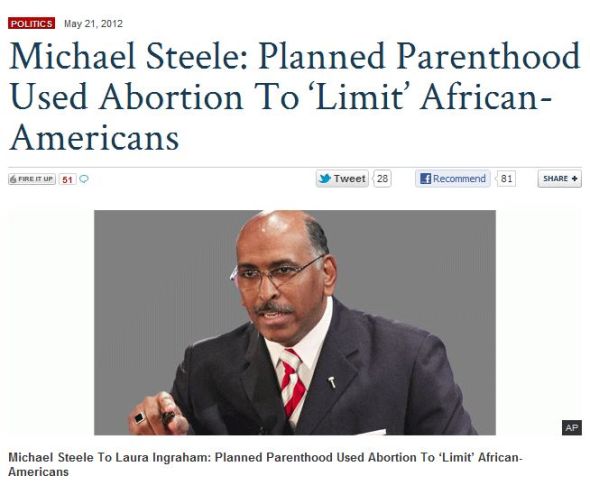 But neither Ingraham nor Fox Nation mentioned Martin Luther King Jr.'s praise of Planned Parenthood for its dedication to family planning or the fact that he accepted an award from the organization.

There is no human circumstance more tragic than the persisting existence of a harmful condition for which a remedy is readily available. Family planning, to relate population to world resources, is possible, practical and necessary. Unlike plagues of the dark ages or contemporary diseases we do not yet understand, the modern plague of overpopulation is soluble by means we have discovered and with resources we possess.

What is lacking is not sufficient knowledge of the solution but universal consciousness of the gravity of the problem and education of the billions who are its victims.

For the Negro, therefore, intelligent guides of family planning are a profoundly important ingredient in his quest for security and a decent life. There are mountainous obstacles still separating Negroes from a normal existence. Yet one element in stabilizing his life would be an understanding of and easy access to the means to develop a family related in size to his community environment and to the income potential he can command.

This is not to suggest that the Negro will solve all his problems through Planned Parenthood. His problems are far more complex, encompassing economic security, education, freedom from discrimination, decent housing and access to culture. Yet if family planning is sensible it can facilitate or at least not be an obstacle to the solution of the many profound problems that plague him.

The Negro constitutes half the poor of the nation. Like all poor, Negro and white, they have many unwanted children. This is a cruel evil they urgently need to control. There is scarcely anything more tragic in human life than a child who is not wanted. That which should be a blessing becomes a curse for parent and child. There is nothing inherent in the Negro mentality which creates this condition. Their poverty causes it. When Negroes have been able to ascend economically, statistics reveal they plan their families with even greater care than whites. Negroes of higher economic and educational status actually have fewer children than white families in the same circumstances.

Some commentators point out that with present birth rates it will not be long before Negroes are a majority in many of the major cities of the nation. As a consequence, they can be expected to take political control, and many people are apprehensive at this prospect. Negroes do not seek political control by this means. They seek only what they are entitled to and do not wish for domination purchased at the cost of human misery. Negroes were once bred by slave owners to be sold as merchandise. They do not welcome any solution which involves population breeding as a weapon. They are instinctively sympathetic to all who offer methods that will improve their lives and offer them fair opportunity to develop and advance as all other people in our society.

For these reasons we are natural allies of those who seek to inject any form of planning in our society that enriches life and guarantees the right to exist in freedom and dignity.

For these constructive movements we are prepared to give our energies and consistent support; because in the need for family planning, Negro and white have a common bond; and together we can and should unite our strength for the wise preservation, not of races in general, but of the one race we all constitute -- the human race.