Since the February 14 mass shooting at Marjory Stoneman Douglas High School, Fox News host Laura Ingraham has been one of the main right-wing figures touting assault weapons as “safe” and attacking the student survivors:

Then, on March 28, Ingraham tweeted a link to a Daily Wire article saying Parkland survivor David Hogg was rejected by some colleges. Ingraham accused Hogg of whining about it: 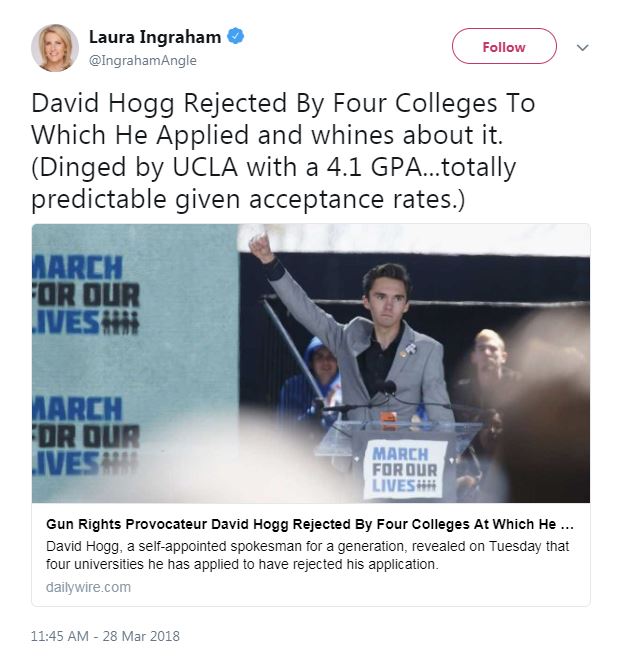 How low are your ratings @IngrahamAngle that you have to start attacking my brother’s grades to get attention? If you ask me, he is more articulate than you and has far better character. Man, that’s real low even for you. Coming from a 14 year old, please grow up. #NeverAgain https://t.co/CgUVeGRfxP

HEY @FLOTUS MY BROTHER IS LITERALLY GETTING CYBERBULLIED BY @IngrahamAngle.

David Hogg then called for followers to contact Ingraham’s advertisers:

Soooo @IngrahamAngle what are your biggest advertisers ... Asking for a friend. #BoycottIngramAdverts

#1) @LibertyMutual. “The Ingraham Angle is brought to you by Liberty Mutual Insurance. Liberty stands with you.” pic.twitter.com/V4YQZTgtGM

#2) @bayerAG/@bayerUS (which owns Claritin): “The Ingraham Angle is brought to you by non-drowsy 24 hour Claritin. Live Claritin clear.” pic.twitter.com/oRMj9setM7

Just a general word of caution: be careful with advertiser lists unless you really know the source they came from and how they compiled. Pulling accurate and up-to-date advertiser info is a big effort...and it's important that you always work from accurate and thorough sources.

Hogg tweeted #ShutUpAndBeObjective, a reference to Ingraham previously telling athletes like LeBron James and Kevin Durant to “shut up and dribble.” There was a significant backlash to those remarks.

Ingraham tried to walk back her comments on Hogg: 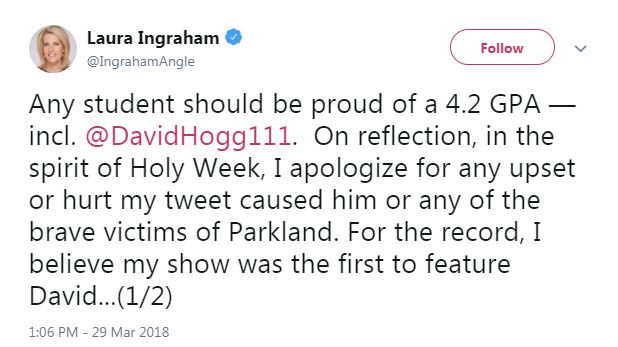 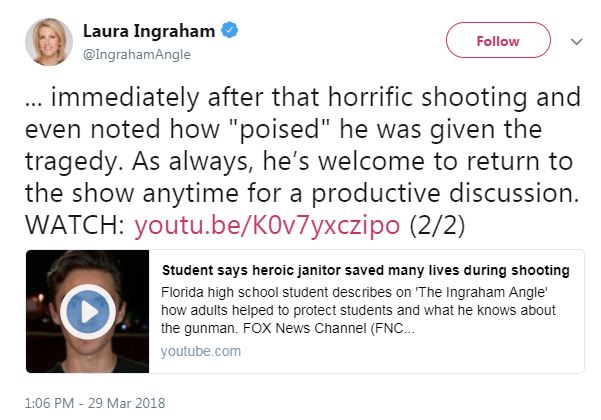 Hogg refused to back down:

I 100% agree an apology in an effort just to save your advertisers is not enough. I will only accept your apology only if you denounce the way your network has treated my friends and I️ in this fight. It’s time to love thy neighbor, not mudsling at children. https://t.co/H0yWs4zMGk

Advertisers Nutrish, TripAdvisor, Wayfair, Expedia, Nestle, Jos A Bank, Johnson & Johnson, Hulu, Stitch Fix, Jenny Craig, Office Depot, Honda, Liberty Mutual, Principal, Miracle-Ear, Ruby Tuesday, and Atlantis, Entertainment Studios, and Bayer have made statements about future ads not appearing on Ingraham's program. In addition to those, here's a list of other advertisers of Ingraham’s, should anyone want to contact them.