New York Gov. Andrew Cuomo signed a bill on January 22 that will protect abortion access even if the Supreme Court overturns Roe v. Wade -- a very salient threat with Justice Brett Kavanaugh now on the court. Anti-abortion advocates and right-wing media immediately responded by framing the law as a “barbaric” action by Cuomo and the New York legislature.

The new law, called the Reproductive Health Act, changed a pre-Roe state law criminalizing abortions that was still on the books in New York. As Mother Jones’ Rosa Furneaux explained, abortions after 24 weeks were formerly criminalized because “the law made self-induced abortions a misdemeanor crime, and made providing one a felony punishable by up to seven years in prison.” According to Furneaux, “The threat of a more conservative Supreme Court has brought new energy to repealing archaic pre-Roe laws nationwide (just as it has given pro-lifers more hope for overturning Roe).”

If Roe is overturned, the new law will mitigate the impact in New York and also expand abortion rights in a few other ways. For example, it:

Right-wing media and anti-abortion activists have focused much of their outrage on the portion of the law allowing abortions after 24 weeks for nonviable pregnancies or if the pregnant person’s health is at risk. The reality is that abortions that happen later in a pregnancy are extremely rare (slightly more than 1 percent take place past the 21-week mark), and are performed in response to complicated personal and medical reasons. As The Cut’s Sarah Jones explained, prior to the New York law’s passage, people “who needed later-term abortions to end nonviable pregnancies were forced to travel far outside the state — a financial and psychological burden.” The impact of these barriers cannot be understated. Writing for Jezebel, Jia Tolentino interviewed one New York woman about the excruciating experience of having to travel out of state for a medically necessary later abortion because of New York’s previous law. In The New Yorker, Tolentino recounted the woman’s ordeal: “Her baseline experience of pregnancy had been punishing to begin with, and New York law had made it much worse.”

Despite the personal nature of these decisions, right-wing media often portray later abortions as part of a supposedly extreme Democratic agenda which allegedly encourages abortions up to the day of birth. Right-wing media and anti-abortion advocates have continued to use this extreme and inaccurate language to stir outrage over New York’s law.

In New York City, thousands more babies of African-American mothers are aborted than born, and the abortion rate among these moms is three times higher than it is for white mothers. Seeing an African-American woman smiling behind Andrew Cuomo as he signed the bill into law was so incongruous. How could she smile, knowing that even more black children will die? 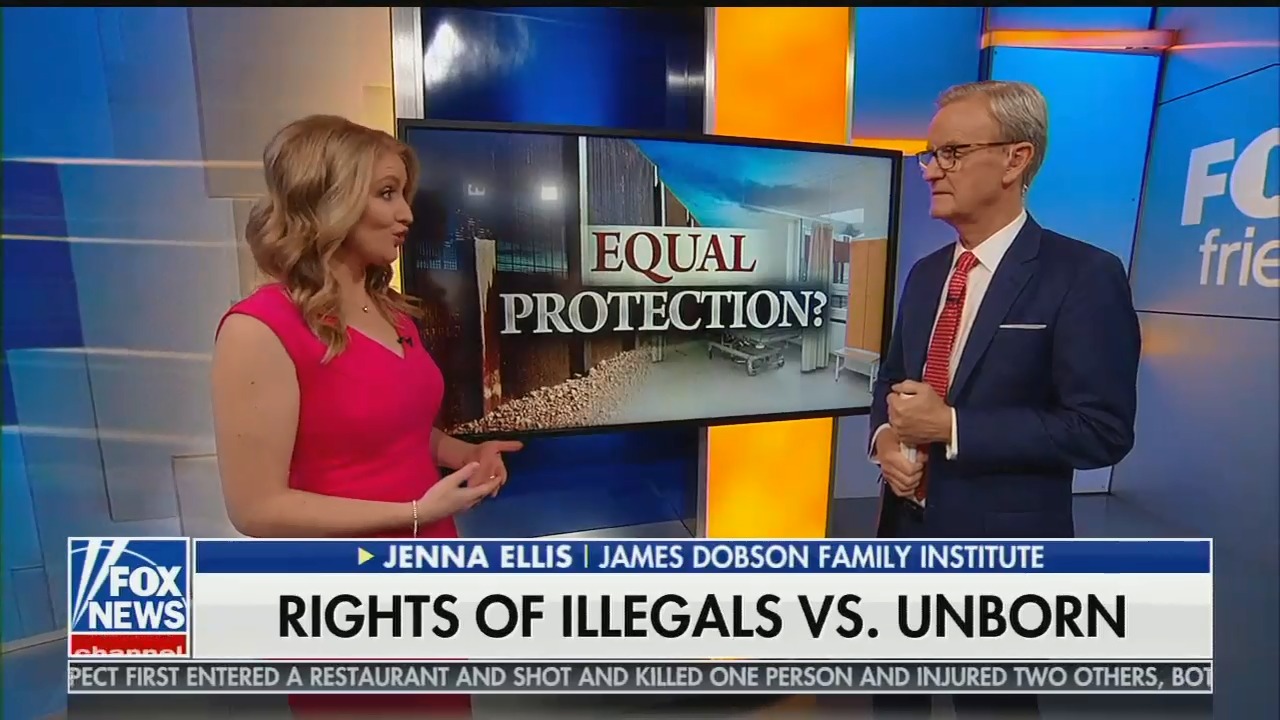 On social media, anti-abortion advocates and right-wing media figures used extreme language to describe the law, and attacked the decision to light up One World Trade Center’s spire after its passage 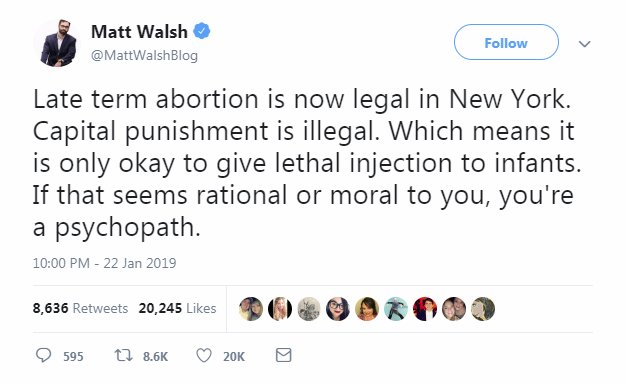 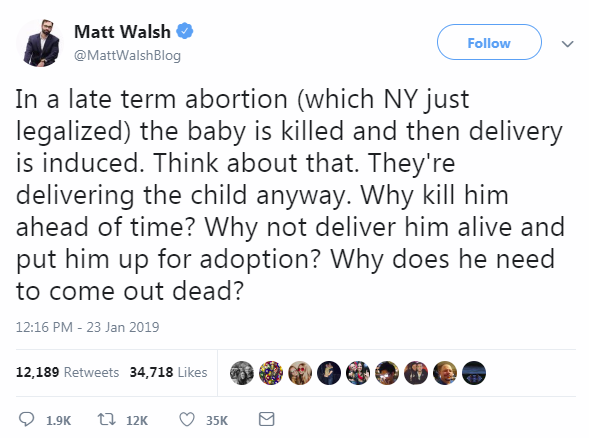 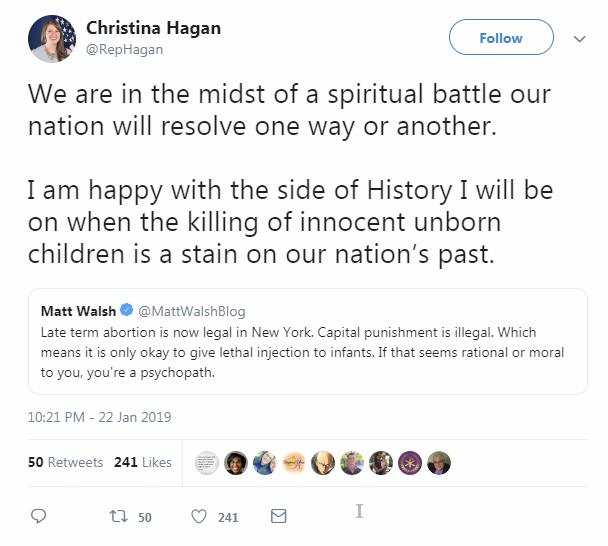 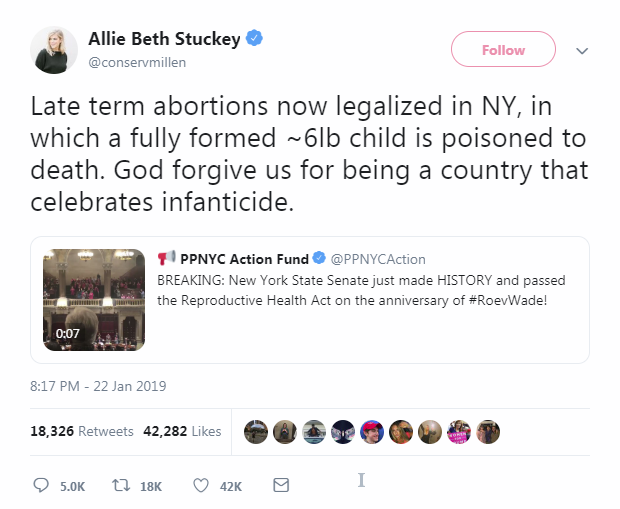 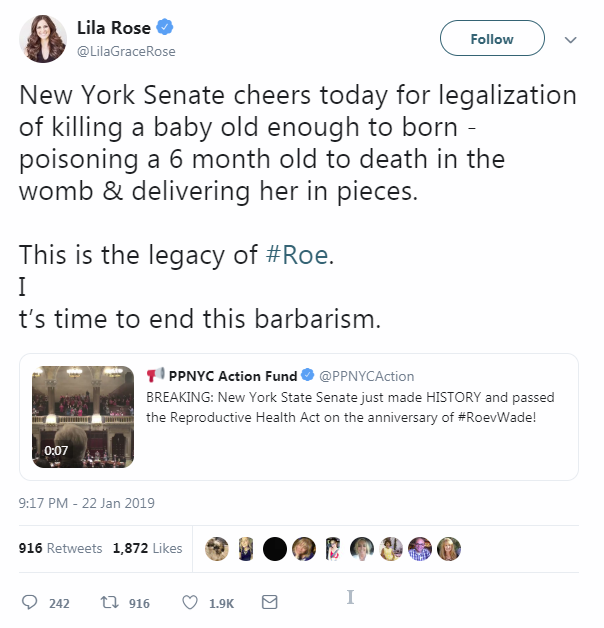 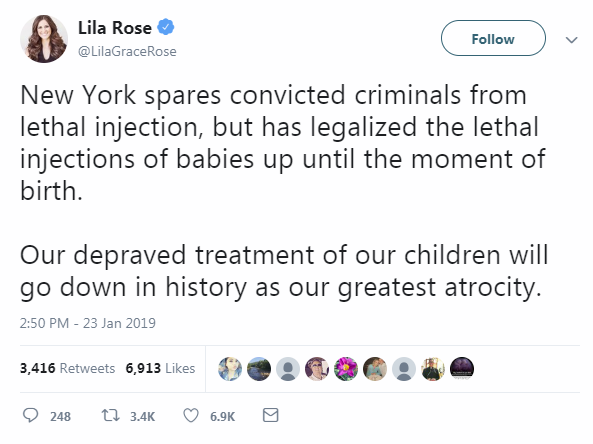 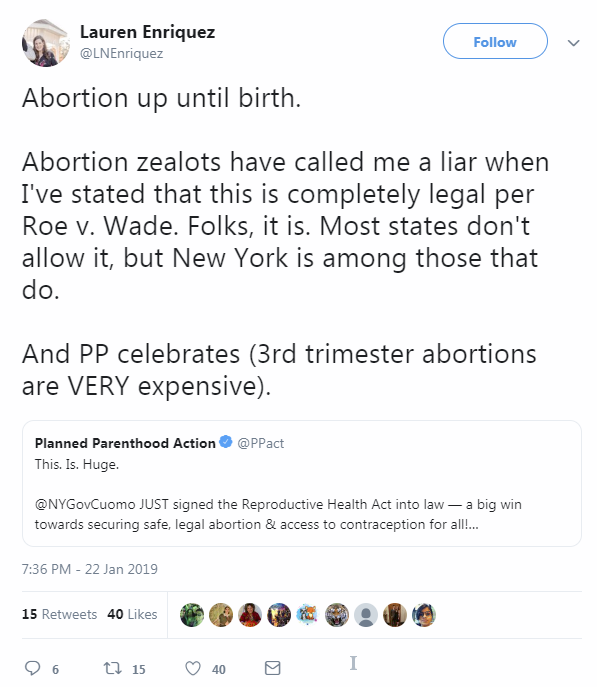 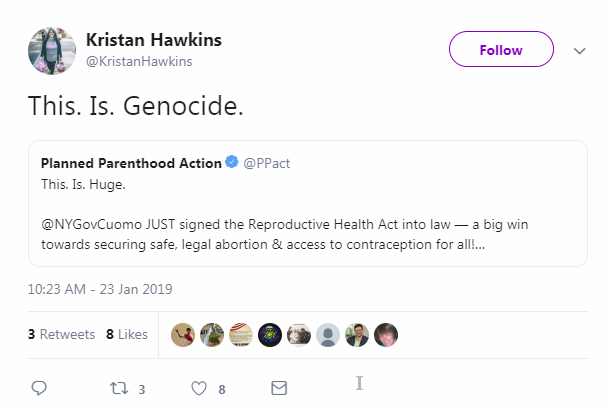 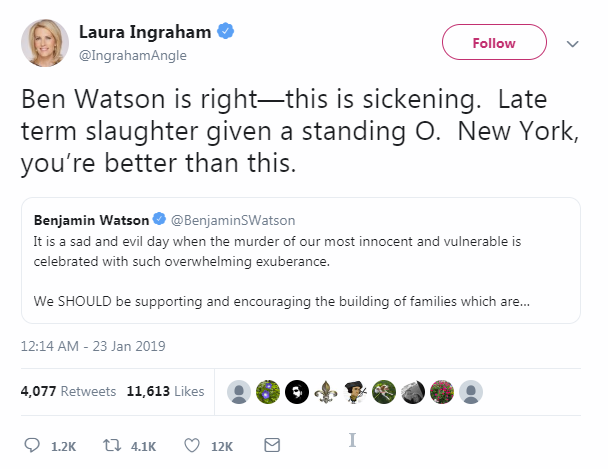 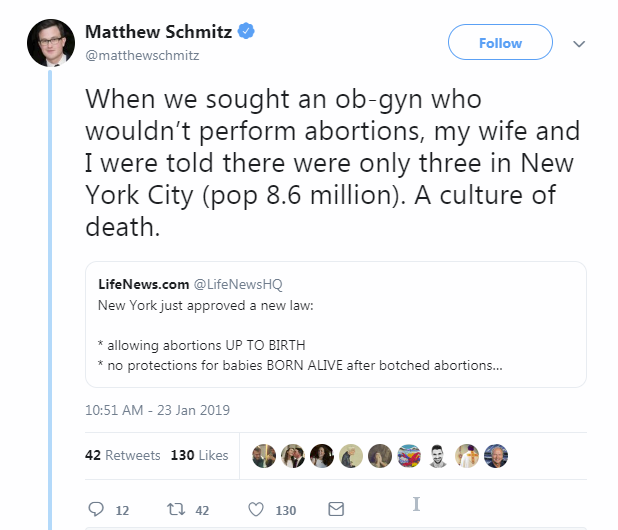 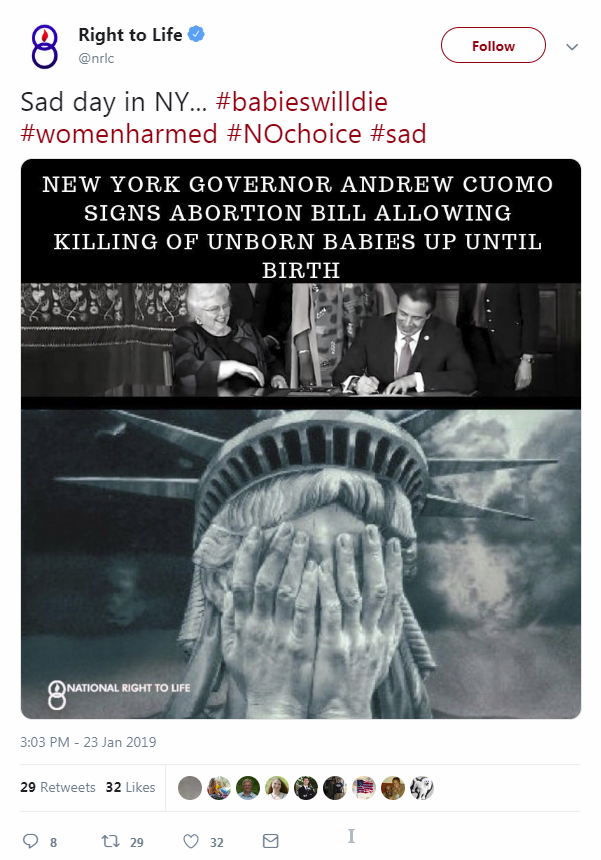 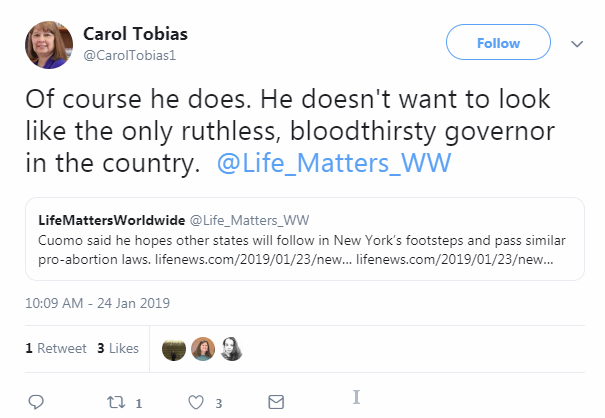 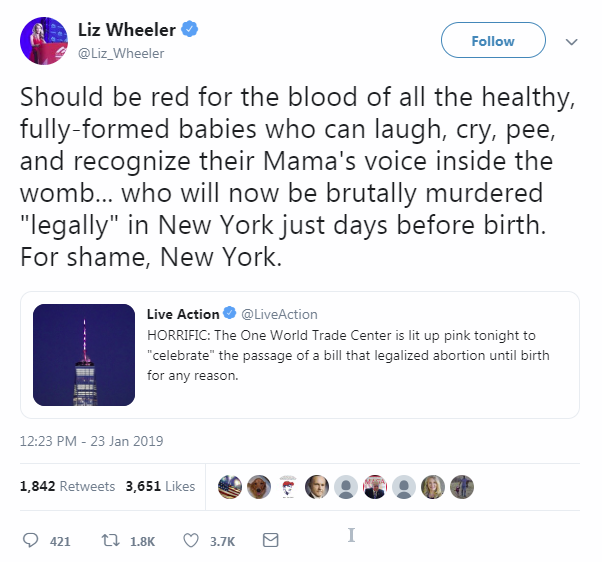 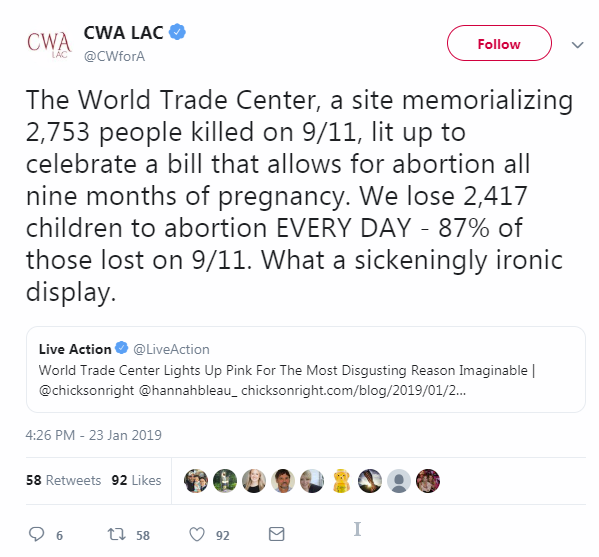