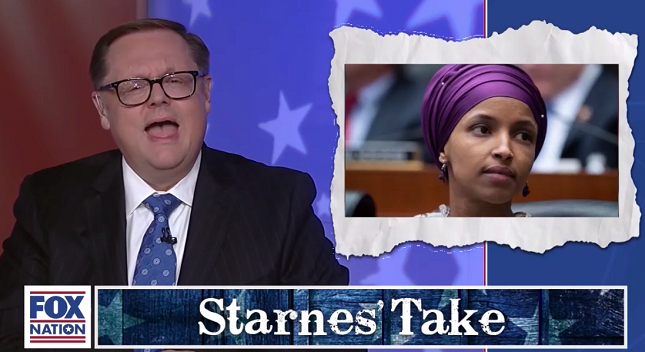 In a July 18 post on his website, Starnes, who has a long history of anti-Muslim bigotry, said: “Quite frankly, I thought the crowd’s reaction was an appropriate response to the incessant un-American rage spewing from the mouth of Rep. Omar.” He added, “Last night was a political rally – not a church service.”

The audience at Trump’s rally was echoing Starnes’ own sentiment toward Omar. On the July 11 edition of his Fox Nation show, Starnes said:

TODD STARNES (HOST): As for Congresswoman Omar and other immigrants who find that America, well, just doesn't meet their standards of living, might I just suggest this -- how about a one-way plane ticket back to whatever third-world hellhole you came from? And don't let the door hit you where the good lord split you.

Fox hosts Jesse Watters and Greg Gutfeld have also defended the rally chant, likening it to the atmosphere at sporting events. Fox prime-time host Laura Ingraham defended the incident by linking to a Twitter thread that denied the “send her back” chant was “an attack on Omar’s race or even an attack on immigrants.”

However, multiple scholars on fascism agreed Trump’s rally and the crowd’s racist chant has obvious parallels to fascist rallies of history. New York University professor Ruth Ben-Ghiat, an expert on historical fascism and propaganda, told HuffPost: “Trump has created a corps of supporters fanatically loyal to him who turn his latest racist messages into group rituals (chants, slogans) and who hate the people he tells them to.”