Conservative media figures reacted to a New Yorker story that a second woman reported Supreme Court nominee Brett Kavanaugh for sexual misconduct by digging in on their support for him and demanding that Republicans hurry up and confirm him.

The New Yorker reported on Sunday evening that Deborah Ramirez, who attended Yale University with Kavanaugh, said that according to her recollection, “Kavanaugh had exposed himself at a drunken dormitory party, thrust his penis in her face, and caused her to touch it without her consent as she pushed him away”:

Ramirez said that, when both she and Kavanaugh were freshmen at Yale, she was invited by a friend on the women’s soccer team to a dorm-room party. She recalled that the party took place in a suite at Lawrance Hall, in the part of Yale known as Old Campus, and that a small group of students decided to play a drinking game together. “We were sitting in a circle,” she said. “People would pick who drank.” Ramirez was chosen repeatedly, she said, and quickly became inebriated. At one point, she said, a male student pointed a gag plastic penis in her direction. Later, she said, she was on the floor, foggy and slurring her words, as that male student and another stood nearby. (Ramirez identified the two male onlookers, but, at her request, The New Yorker is not naming them.)

A third male student then exposed himself to her. “I remember a penis being in front of my face,” she said. “I knew that’s not what I wanted, even in that state of mind.” She recalled remarking, “That’s not a real penis,” and the other students laughing at her confusion and taunting her, one encouraging her to “kiss it.” She said that she pushed the person away, touching it in the process. Ramirez, who was raised a devout Catholic, in Connecticut, said that she was shaken. “I wasn’t going to touch a penis until I was married,” she said. “I was embarrassed and ashamed and humiliated.” She remembers Kavanaugh standing to her right and laughing, pulling up his pants. “Brett was laughing,” she said. “I can still see his face, and his hips coming forward, like when you pull up your pants.” She recalled another male student shouting about the incident. “Somebody yelled down the hall, ‘Brett Kavanaugh just put his penis in Debbie’s face,’ ” she said. “It was his full name. I don’t think it was just ‘Brett.’ And I remember hearing and being mortified that this was out there.”

Ramirez acknowledged that there are significant gaps in her memories of the evening, and that, if she ever presents her story to the F.B.I. or members of the Senate, she will inevitably be pressed on her motivation for coming forward after so many years, and questioned about her memory, given her drinking at the party.

And yet, after several days of considering the matter carefully, she said, “I’m confident about the pants coming up, and I’m confident about Brett being there.” Ramirez said that what has stayed with her most forcefully is the memory of laughter at her expense from Kavanaugh and the other students. “It was kind of a joke,” she recalled. “And now it’s clear to me it wasn’t a joke.”

Another classmate told The New Yorker that he heard about the incident at the time and that he was told Kavanaugh was the one who exposed himself to Ramirez.

The new reporting follows a week of right-wing media attacks on Kavanaugh’s first accuser, Christine Blasey Ford, who says Kavanaugh attempted to rape her when they were in high school. Ford has agreed to testify before the Senate Judiciary Committee this coming Thursday, but after this new allegation, Sen. Dianne Feinstein (D-CA) has called for that hearing to be delayed.

Other conservatives called Ramirez’s accusation fake, criticized the timing of her going public, demanded Republicans stand by Kavanaugh anyway, and painted Kavanaugh as the true victim of these alleged sexual assaults.

Conservatives allege Ramirez’s account is part of a Democratic conspiracy

Fox & Friends co-host Anna Kooiman: “Is this a drip, drip, drip … by the Democrats trying to delay everything until the midterm elections and really fire up their base saying Republicans are bullies?”

Conservative talk radio host Erick Erickson: “It seems more and more likely that the Blasey Ford delays were not to let her drive across country, but were to allow the Ramirez hit to get out. This is all coordinated and none of it is credible.”

Wall Street Journal columnist Kimberley Strassel: “The left made a mistake with this Ramirez story. … It strongly suggests the Ford delay demands were about cooking this up. Destroys credibility all around.” 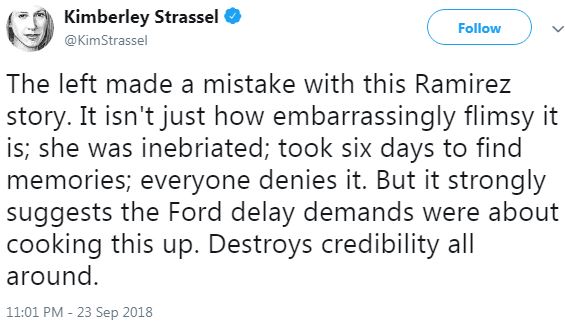 Fox Business anchor Dagen McDowell: “I think that this -- the timing is suspect and people have [a] right to question this second accuser coming forward.”

Daily Wire’s Matt Walsh: “Democrats were stalling last week to give themselves more of an opportunity to conjure up another accuser against Brett Kavanaugh,” and “they whipped together another accusation.”

Turning Point USA’s Charlie Kirk: “Senate Republicans: DO NOT CAVE! If you were up for this nomination I bet many of you would have plenty of these fake accusations come up. Stand by our guy. Do not waver.” 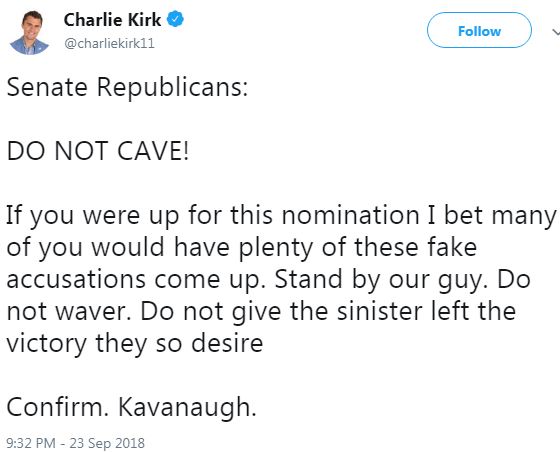 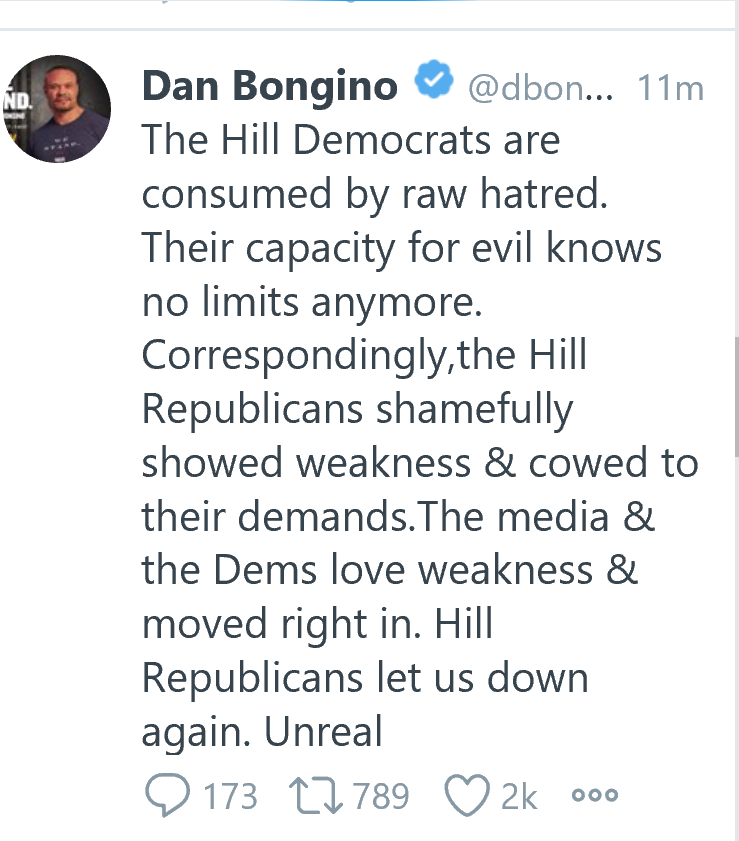 The Rebel’s Amanda Head: If Sen. Charles Grassley (R-IA) and Republicans “don’t fight these allegations and #ConfirmKavanaghNow we will lose midterms, we will lose 2020, and what’s worse, we will lose any chance at seeing a conservative majority SCOTUS in our lifetime.” 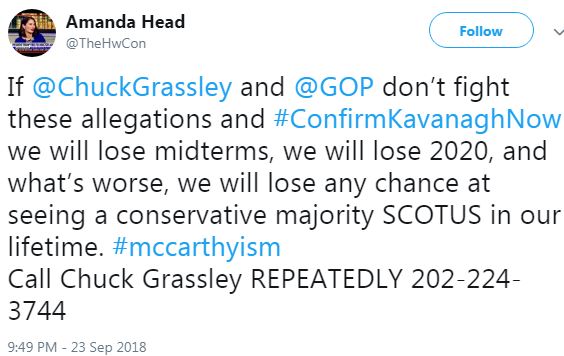 Federalist co-founder Sean Davis: “Senate Republicans have a simple choice: stand up to a coordinated Democrat smear campaign and confirm Kavanaugh, which will energize GOP voters and preserve House/Senate majorities, or buckle under Democrat lies and give up congressional GOP majorities for a decade or more.” 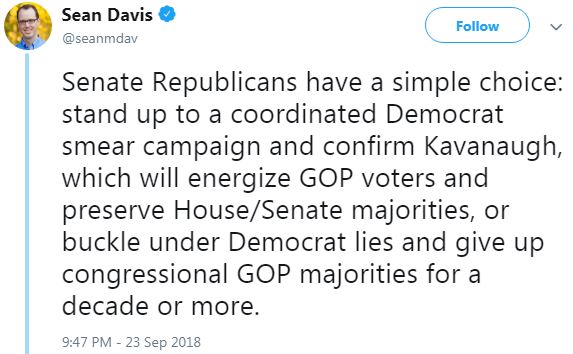 CRTV’s Michelle Malkin: If Senate Republicans “refuse to man up & stop coordinated Dem smear campaign once & for all, the consequences reach far beyond the electoral landscape.” 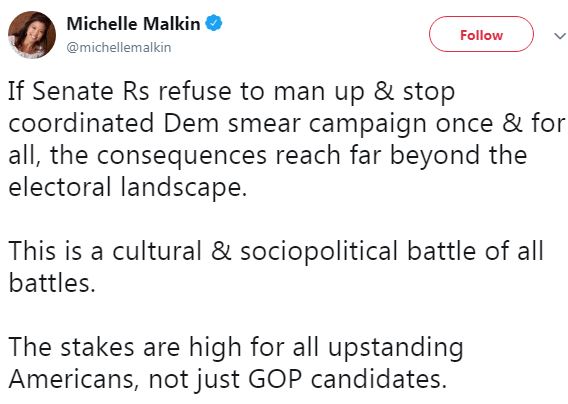 One America News Network host Jack Posobiec: “Raise your hand if you think the GOP should stop playing games and hold the Kavanaugh vote Monday.”

Conservatives complain Kavanaugh is the real victim here, not Ford or Ramirez

Fox News anchor Martha MacCallum: “‘Sickening’ was the word I heard most often this weekend to describe what is happening. Innocent until proven guilty is how we do this in America.”

Fox News contributor Lisa Boothe: “What is happening to #JudgeKavanaugh is wrong and terrifying.” 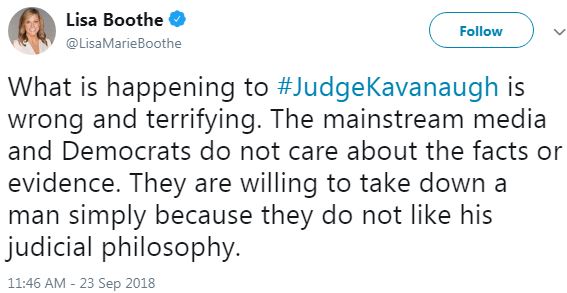 Former Fox News host Bill O’Reilly: “Republicans are becoming terrified of the Kavanaugh situation because they know the media will embrace every lurid accusation without scrutiny, and no one will be held accountable for ignoring due process.”

Independent Women Forum’s Julie Gunlock: “What Ms. Ramirez and her enablers have done is odious. She’s destroying the life of a good man based on her own hazy memory of an event that happened decades ago when she was admittedly drunk.” 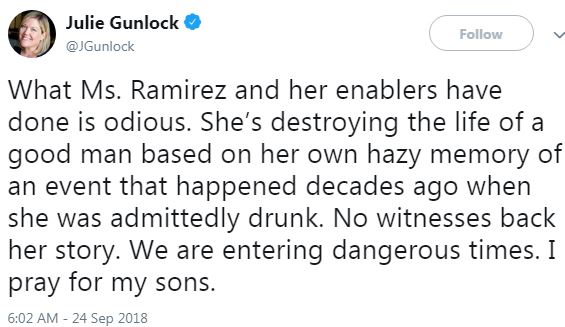 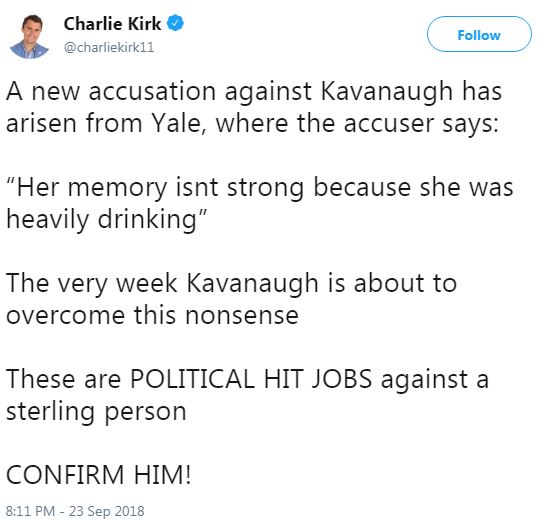 American Conservative Union’s Matt Schlapp: “This Kavanaugh confirmation has transformed into a disgrace. How is it when Dems win their SC noms get an easy time, but ours get mauled.”

Daily Caller’s Amber Athey: “I have no words for how sickened I am by how the left and the establishment media are weaponizing non-credible sexual assault claims to destroy a human being.”