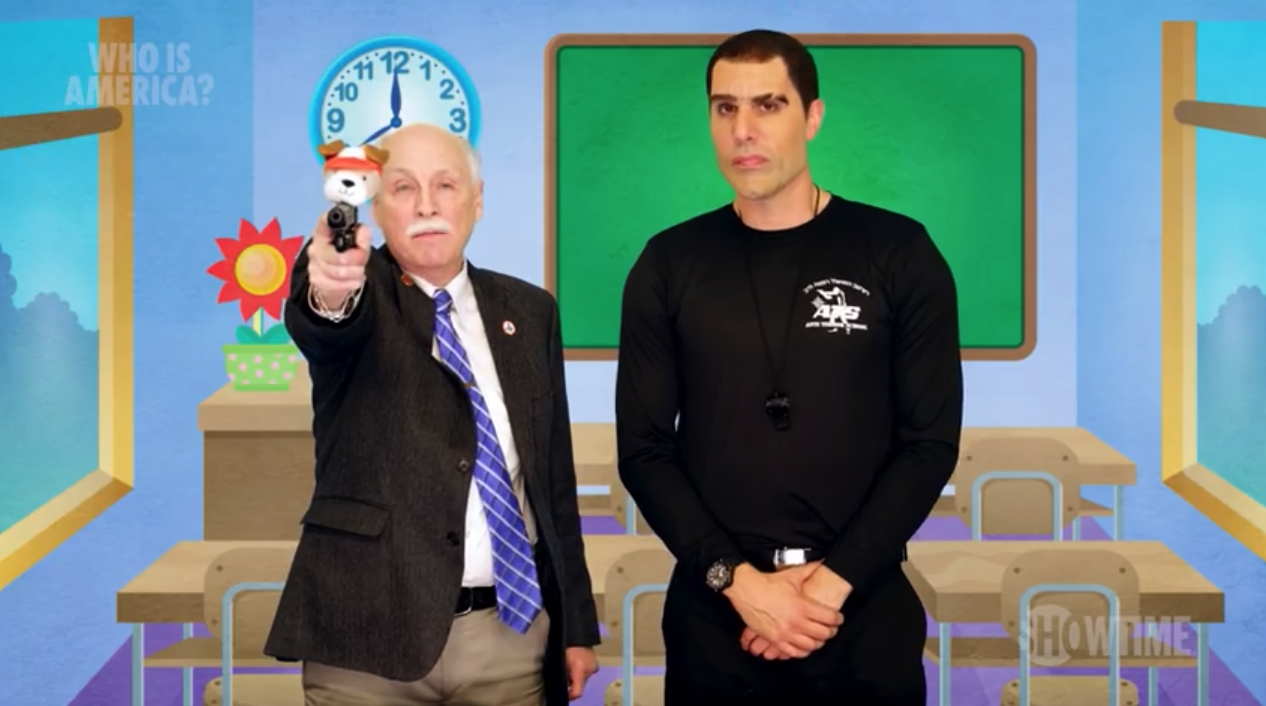 During the inaugural episode of his Showtime series Who Is America? comedian Sacha Baron Cohen got gun activists and sitting members of Congress to endorse a hypothetical program to arm preschoolers to ward off school shootings.

While one might imagine Cohen would have had to interview fringe and obscure activists to secure endorsements for such a program, which he said would arm children as young as 3, the two gun group leaders interviewed both wield significant influence over how gun laws are shaped in the United States.

During his interview, Van Cleave called gun training for children as young as 3 “a good idea” and mused that children could be “very effective soldiers” because they haven’t developed a “conscience, where you feel guilty about doing something wrong.” He also bragged that his group killed a bill in the Virginia legislature that would have restricted access to guns for children between the ages of 4 and 12. Van Cleave also agreed to film promotional materials for Cohen’s program; in the video, he is shown handling a number of guns disguised as stuffed animals that would be given to children.

Like Van Cleave, Pratt filmed promotional material for Cohen’s program in which he read from a script that said, “Toddlers are pure, uncorrupted by fake news or homosexuality. They don’t worry if it’s politically correct to shoot a mentally deranged gunman -- they’ll just do it.”

Prior to their appearances on Cohen’s program, neither Pratt nor Van Cleave were strangers to extremist rhetoric. Pratt, who was forced out of Pat Buchanan’s 1996 presidential campaign after his ties to white supremacists were revealed, has repeatedly said that politicians should fear being shot by GOA members if they endorse stronger gun laws. During a 2013 CNN appearance, Pratt expressed support for having guns in kindergartens, presumably in the hands of school staff. For its part, VCDL promoted an article in a 2011 newsletter that described in explicit detail how to use a gun to ward off an attack by “urban thugs” armed with pangas -- a type of African machete.

Despite these fringe views, both Van Cleave and Pratt are prominent lobbyists against stronger gun laws. The Associated Press calls VCDL one of Virginia’s “most influential gun rights groups.” VCDL tracks the dozens of gun laws introduced each year and on its 2018 tracker claims 75 legislative victories on gun bills. For years, VCDL has staged rallies outside of the Virginia legislature at the start of each session. During the events, armed VCDL supporters (guns are allowed inside the state house) lobby against proposals to strengthen gun laws and in favor of proposals to weaken gun laws. (After a disappointing 2014 lobby day, VCDL suggested in its newsletter that if the group didn’t get its way on gun laws, violence would be a legitimate option.)

GOA is closely associated with Republican Sen. Ted Cruz of Texas. During a 2015 GOP primary debate, Cruz said that he was “honored” to be endorsed by the group. During a call with GOA supporters earlier that year, Cruz said, “GOA endorsed me early on when I ran for the Senate and played a critical part in helping get me elected and sending me from the state of Texas to represent 27 million Texans.” Following the 2012 Sandy Hook Elementary School massacre, the National Rifle Association was reportedly willing to allow a modest expansion of background checks on gun sales to pass the Senate, but the group changed its position after GOA was successful in spreading the false narrative that the law would create a federal gun registry.