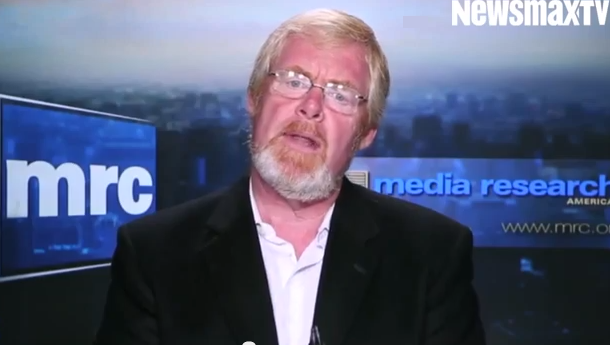 Media Research Center (MRC) President Brent Bozell slammed Hollywood for including too many gay characters in television programs and films, lamenting that gay characters “never face any real opposition to the gay agenda on these so-called 'inclusive' programs.”

In an October 25 column for TownHall.com, Bozell criticized the LGBT advocacy group GLAAD's efforts to track the number of LGBT characters in television programs. Bozell mocked GLAAD for throwing a “tantrum” over the lack of LGBT characters on many networks, asserting that the group wants “children indoctrinated,” because apparently it's “propaganda” to expose them to LGBT characters on their shows (emphasis added):

These cultural trend-enforcers went after the movies this summer, complaining that out of the 101 film releases by the major studios in the 2012 calendar year, “only 14 films contained characters identified as lesbian, gay or bisexual. There were no films containing transgender characters.”

In the 2012-13 TV season, GLAAD found a record number of LGBT characters -- 4.4 percent, or at least double their actual percentage of the population. Fox was honored for having these characters in 42 percent of their programming hours -- although that wasn't enough for “Excellent” status, merely “Good.”

There's no wonder that a Gallup poll in 2011 found that on average, American adults estimate that 25 percent of Americans are homosexual. They're getting that crazy idea from TV.

They want children indoctrinated as well. GLAAD is also not shy when it comes to Teen Nick, Cartoon Network and the Disney Channel. Apparently, children also desperately need the propaganda of gay characters in 42 percent of programming hours. They're extremely happy with the liberalism of “ABC Family” and have relayed that Disney Channel executives promised GLAAD they will “introduce LGBT characters in an episode of its original series 'Good Luck Charlie' set to air in 2014, a first for the network.” The first of many, they expect.

Here's the catch: Gay characters never face any real opposition to the gay agenda on these so-called “inclusive” programs. There is no measure of Orthodox religious inclusion and no real debates. The victory of the left is assumed without thinking. When a conservative character is created -- like Ellen Barkin's “Nana” in “The New Normal” -- it's a vicious cartoon, the kind that those “against defamation” folks deeply enjoy.

Even if Bozell is bothered by modest representations of LGBT people in TV and film, media experts note the importance of LGBT characters in shaping popular attitudes. As University of Minnesota communications professor Edward Schiappa told The New York Times in 2012, “TV and movie representation matters,” and while LGBT-inclusive programs won't necessarily “change bigots into saints ... they can snowball.”

Perhaps that is why the mere presence of LGBT people on television bothers Bozell so much. MRC would prefer that major networks spend more time telling the stories of so-called "ex-gays" while attacking victims who claim to have been bullied for being LGBT. MRC isn't interested in combating media bias - it wants to actively counter pro-LGBT sentiments by offering negative and skewed depictions of LGBT people.