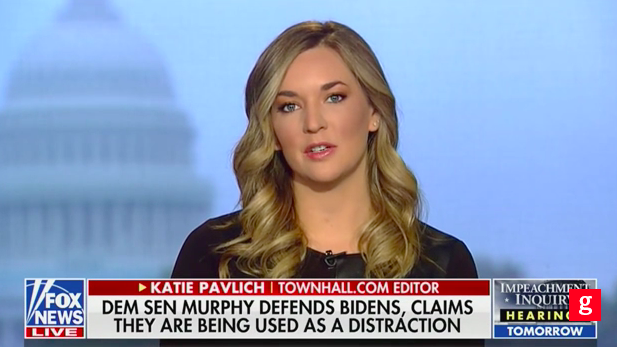 On the November 18 edition of America’s Newsroom, Fox News contributor Katie Pavlich erroneously claimed that Democratic presidential candidate Joe Biden “did something illegal” when he pushed for disgraced Ukrainian Prosecutor General Viktor Shokin to be fired. In reality, Shokin's dismissal was the well-established position of the United States ... and there is no evidence that Biden did anything illegal in carrying out that policy.

On Monday, Pavlich said, “If we're going to hold former Vice President Joe Biden to the same standard that Democrats ... are holding to President [Donald] Trump, then Joe Biden certainly did something illegal and unethical when he called for the firing and demanded the firing of a prosecutor in exchange for a billion dollars in aid to Ukraine.”

Shokin had a reputation for shady and unscrupulous behavior as Ukraine’s top prosecutor, and The New York Times reported in 2016 that the “United States and other Western nations had for months called for the ousting of Mr. Shokin” for “turning a blind eye to corrupt practices and for defending the interests of a venal and entrenched elite.”

As the segment’s other panelist Jessica Tarlov explained, Deputy Assistant Secretary of State George Kent testified on November 13 that Shokin was viewed as remarkably corrupt, and Biden’s actions were in accordance with U.S. policy. When he was asked if there was “any factual basis to support those allegations” of wrongdoing by Biden, Kent responded, “None whatsoever.”

Despite the overwhelming evidence contradicting Pavlich’s claim that Biden “did something illegal,” co-anchor Bill Hemmer did not offer any pushback.