Americans for Legal Immigration PAC (ALIPAC) leader William Gheen has frequently presented himself as a moderate within the American nativist movement since founding ALIPAC in 2005. 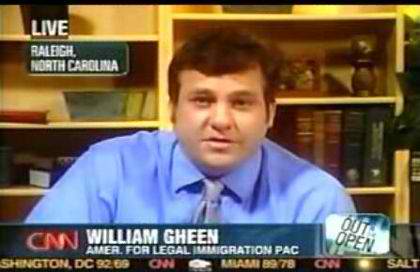 Last May, for example, Gheen yanked ALIPAC's backing of a major rally for Arizona's notorious immigration crackdown law, S.B. 1070, after learning that one of its organizers was linked to racist skinhead groups.

Such anti-extremist posturing has lent Gheen mainstream media credibility. He's been quoted often, nearly two dozen times by mainstream papers in the last six months, according to a Nexis search. Even The New York Times included his comments in a story on border security published August 9.

Earlier this week, however, Gheen appeared to relinquish his mainstream legitimacy in favor of predicting race war and endorsing violence in response to the immigration policies of “Dictator Barack Obama.”

As first reported by Right Wing Watch, Gheen argued on the air that the Obama administration is preparing for “conflict with White America” by allowing millions of non-white immigrants into the U.S. to “back them up.”

Gheen advocated for “illegal and violent” actions in response.

GHEEN: What Janet Napolitano has spent most of her time doing in the last couple of months has been, one, preparing the new spy network that's available now, the new data-collecting, see everything you do online, beyond the normal terrorist list that they're creating, they're creating a much larger list now of people who might be troublesome here in the country. And putting out videos and propaganda telegraphing what I believe to be a conflict with White America they're preparing for after they get another 10 or 15 million people in the country to back them up.

We're no longer referring to him as President Barack Obama, our national organization has made the decision and made the announcement we now refer to him as Dictator Barack Obama. That's what he is. And basically at this point, if you're looking for a peaceful, political recourse there really isn't one that we can think of, and I'm really not sure what to tell people out there other than I guess they need to make decisions soon to just accept whatever comes next or some type of extra-political activities that I can't really even talk about because they're all illegal and violent.

The Southern Poverty Law Center notes that while open expressions of racial radicalism are new for Gheen, the ALIPAC leader is “no stranger to more more garden-variety bigotry and fear-mongering”:

He has accused Mexican immigrants of carrying infectious diseases and plotting to take over the Southwest. In April 2010, he targeted Sen. Lindsey Graham (R-S.C.), claiming that the 56-year-old bachelor is gay and saying he should come out to avoid being blackmailed into working with Democrats on immigration reform. In July 2010, Gheen told revisionist “historian” David Barton that LGBT people secretly want to import undocumented immigrants as a way of “replacing many core Americans and American values,” part of an overall “war” against Americans.